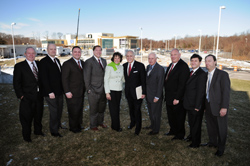 The commitment made by the New York Power Authority will advance Governor Paterson’s “45 by 15” program, one of the nation’s most aggressive energy efficiency and renewable energy initiatives, with a goal to meet 45 percent of the state’s electricity needs through improved energy efficiency and renewable sources by 2015. It is conservatively estimated that this program will create 50,000 new jobs throughout the State.

“The goals and work of the Advanced Energy Research Technology Center are a key element to establishing New York State as a commanding force in the clean energy economy,” said Governor David A. Paterson. “Support for academic research coupled with public-private partnerships is critical to fostering our economic renaissance, and these investments in advanced renewable energy technologies will foster growth in clean energy businesses throughout the state while helping to cut energy costs and reduce our greenhouse gas emissions.”

“The New York Power Authority is proud to support the Advanced Energy Center‘s groundbreaking and innovative efforts in energy research and technology transfer,” Kessel said. “This Center will advance significant alternative and renewable energy research, foster coordination and cooperation among public, private and educational energy stakeholders, and be the catalyst for the growth of the clean energy industry on Long Island and across the state. It can also play a very significant role in the development and application of Smart Grid technologies that could be beneficial to NYPA and other electric utilities in New York.”

“Thanks to this generous grant, NYPA has solidified its role as a truly integral partner to Stony Brook and the Advanced Energy Center,” said President Stanley. “We are very excited with the trajectory of the Advanced Energy Center, in its designation as the home to the newly established New York State Energy Policy Institute, and its anticipated contribution toward bringing the resources together to create and implement new, efficient sources of energy through research and technology development.”

“We’re extremely pleased that the New York Power Authority is providing this support to the Advanced Energy Center,” said Center Chairman Robert Catell. “This is a significant step forward in that NYPA’s grant will help foster the kind of leading edge research that can ultimately benefit consumers in New York State by helping to lower energy costs through the application of new energy efficiency technologies by both publicly and privately operated electric system throughout the state.”

“The Advanced Energy Center was founded on the principle of partnership. We are creating an unprecedented partnership of energy producers and providers, academic and research institutions, regulators, and industry customers and suppliers to put New York at the cutting edge in technology development and deployment,” said Dr. Yacov Shamash, Vice President for Economic Development at Stony Brook and Co-Director of the Advanced Energy Center. “This support from NYPA, which is not only the country’s largest state-owned not-for-profit power organization but a national leader in promoting energy efficiency and the transition to clean energy technologies.”

The commitment by NYPA includes $500,000 to support the operations of the Advanced Energy Center, an academic and research unit of Stony Brook University. The Advanced Energy Center was established to institute a broad-based interdisciplinary research program which integrates fundamental science, nanotechnology, and engineering to design the next generation of advanced energy systems.

Advanced Energy Center research is expected to focus on the needs of the state’s utilities, the backbone of the energy generation infrastructure and distribution system, such as transmission research, smart grid research and utility scale renewable research, programs aligned with NYPA’s research goals and activities.

The Advanced Energy Research Center has agreed to provide NYPA pre-publication copies of technical publications and access to certain technical programs, such as research into applications of smart grid technologies. Both NYPA and the Advance Energy Center have committed to work towards a potential future smart grid project, including modeling and simulation of a smart grid, interoperability of smart grid systems, or smart grid cyber security matters, which would be funded, in part, by an additional grant of up to $250,000 from NYPA.

In addition, NYPA will become a member of Advanced Energy Center’s advisory committee, which is comprised of stakeholders from utilities, industry, research and government. The goal is to help guide research strategy, research assessment and needs, and research execution across the state.

Under the leadership of Governor Paterson, NYPA has been a leader in advancing cutting edge clean energy projects. NYPA’s total financing in energy services has surpassed the $1 billion mark, making it a recognizable leader in both the United States and abroad. Its projects range from basic efficiency improvements for public facilities, helping save New York taxpayers more than $100 million a year, to demonstrations of new technologies, including solar and wind power, that have helped cut America’s dependence on foreign oil by some two million barrels a year while significantly reducing greenhouse gas emissions.

The Advanced Energy Center also hosts the New York State Smart Grid Consortium, which is an unprecedented collaboration of all of the state’s major power producers and distributors, the Independent System Operator, the Public Service Commission, NYPA, NYSERDA, NYSTAR and others in the fields of energy and technology.

Governor Paterson recently announced that Stony Brook University has been designated by the New York State Energy Research and Development Authority (NYSERDA) to lead the New York Energy Policy Institute (NYEPI), which is a statewide consortium of energy research centers and experts that will advise the state on energy policy.

About NYPA:
The New York Power Authority uses no tax money or state credit.  It finances its operations through the sale of bonds and revenues earned in large part through sales of electricity. NYPA is a leader in promoting energy efficiency, new energy technologies and electric transportation initiatives. It is the nation’s largest state-owned electric utility, with 18 generating facilities in various parts of New York State and more than 1,400 circuit-miles of transmission lines.      About 75 percent of the electricity it produces is clean renewable hydropower.  Its lower-cost power production and electricity purchases support hundreds of thousands of jobs throughout the state.  For more information, www.nypa.gov