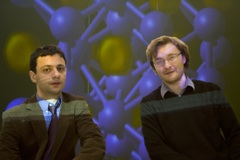 Stony Brook University Professor of Geosciences and Physics, Artem Oganov, along with several colleagues, appears to have solved the long-standing mystery of excessive heat on the planet Neptune. Using Oganov’s innovative method for crystal structure prediction, the researchers have established support for theory that the sinking of massive amounts of diamond in Neptune’s interior creates its heat.

“Professor Oganov and his collaborators have developed a simple and elegant modeling approach that opens new perspectives in materials sciences,” says Professor Gilles Frapper, leader of the theoretical chemistry group, Laboratory of Catalysis in Organic Chemistry, at Poitiers University in France. “USPEX provides great opportunities to predict the structure of compounds simply starting from a chemical formula and letting the ‘evolutionary code’ work.”

“Results in this work are extremely interesting and are expected to help in developing realistic models of internal evolution and energetics of planets like Neptune and Uranus,” notes Professor Aitor Bergara, a faculty member at the Science and Technology and Donostia International Physics Center (DIPC) at the University of the Basque Country in Spain.

Oganov’s team made the first major step in solving this problem in 2006 with their development of a powerful evolutionary algorithm that finds the stable structure using ideas inspired by biological evolution.  This method has been called “revolutionary” by some scientists, and Oganov’s simulation program, distributed free on his website, is now used by more than 250 researchers worldwide.

The latest development greatly speeds up the search and enables unprecedentedly complex systems to be treated.

“The USPEX method becomes extremely powerful to predict the most stable crystal structures,” notes Professor Bergara. “This method is completely ab initio, does not require experimental information and is based on the ideas of natural evolution: the computer generates dozens of initial structures, but only the most preferred ones are allowed to mate and mutate before starting the process, until the best candidates are finally obtained.

“USPEX is becoming very popular among the scientific community and is being widely used all over the world,” notes Professor Bergara.

“The key to success was to learn from nature,” says Andriy O. Lyakhov, a postdoctoral student at Stony Brook University and a member of Oganov’s research team.  “Evolutionary algorithms in general are inspired by the living world, and there is more to learn from crystallography itself.”

Oganov’s method has already been applied to a range of materials, leading to numerous predictions that looked impossible within traditional chemistry, yet were confirmed by subsequent experiments.  The research has yielded over 50 publications, many in Nature, Physical Review Letters and PNAS, and include the following: the prediction of startling transformation of metallic sodium into a transparent non-metallic material under pressure; discovery of a partially ionic form of a pure element (boron); prediction of very unusual high-pressure states of calcium; discovery of a new allotropic structure of carbon; and predicted stability of certain unusual Li-H compounds.

The most recent developments enable structure predictions for nanoparticles and surfaces that have the potential to revolutionize the development of new technologies.

“This is a very exciting time,” says Professor Oganov. “What was thought to be impossible yesterday is now becoming possible, including the discovery of new materials on the computer.”  He adds, “We can even study processes that take place in deep interiors of remote planets, as the study of diamond formation on Neptune shows.”

“This is a very exciting time for chemists,” he says. “Oganov’s breakthrough will play a major role in material design.”

Modern Methods of Crystal Structure Prediction, edited by Artem Oganov, has just been published (November 2010) by Wiley-VCH Publishing in Berlin, Germany. The book provides a summary of the major achievements in recent years, as well as the challenges that still remain.