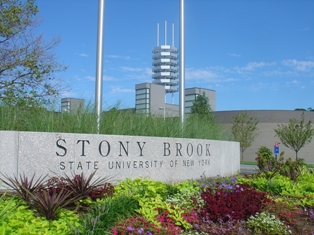 Selected from a pool of more than 500 public four-year institutions, SBU ranking improves by 14 over previous year

a “stellar education at an affordable price” – besting last year’s distinction by 14 when Stony Brook was ranked the 39th best value. The annual public school rankings appear on the Kiplinger website and in the Kiplinger’s February 2011 issue.

“It is always gratifying when Stony Brook is recognized as a top value and for its academic excellence by an independent organization – especially when our budgets are being cut and we have to do more with less,” said President Samuel L. Stanley, Jr., M.D. “The Kiplinger’s ranking speaks to the effort put forth by our faculty and staff to achieve excellence, and ultimately is a testament to our outstanding students.”

Colleges and universities in the Kiplinger 100 were ranked according to academic quality—including admission and retention rates, student-faculty ratios, four- and six- year graduation rates, and cost and financial aid.

“Despite rising tuition costs, there are still many first-rate institutions providing outstanding academics at an affordable price,” said Janet Bodnar, editor of Kiplinger’s. “Schools like these on the Kiplinger 100 list prove graduates can enter the workforce with a great education—and without a huge cloud of debt.”

About Stony Brook University
Part of the State University of New York system, Stony Brook University encompasses 200 buildings on 1,450 acres. In the 53 years since its founding, the University has grown tremendously, now with nearly 25,000 students and 2,200 faculty and is recognized as one of the nation’s important centers of learning and scholarship. It is a member of the prestigious Association of American Universities, and co-manages Brookhaven National Laboratory, joining an elite group of universities, including Berkeley, University of Chicago, Cornell, MIT, and Princeton that run federal research and development laboratories. SBU is a driving force of the Long Island economy, with an annual economic impact of $4.65 billion, generating nearly 60,000 jobs, and accounts for nearly 4% of all economic activity in Nassau and Suffolk counties, and roughly 7.5 percent of total jobs in Suffolk County.

About Kiplinger’s Personal Finance
For nine decades, the Kiplinger organization has led the way in personal finance and business forecasting. Founded in 1920 by W.M. Kiplinger, the company developed one of the nation’s first successful newsletters in modern times. The Kiplinger Letter, launched in 1923, remains the longest continuously published newsletter in the United States. In 1947, Kiplinger created the nation’s first personal finance magazine.