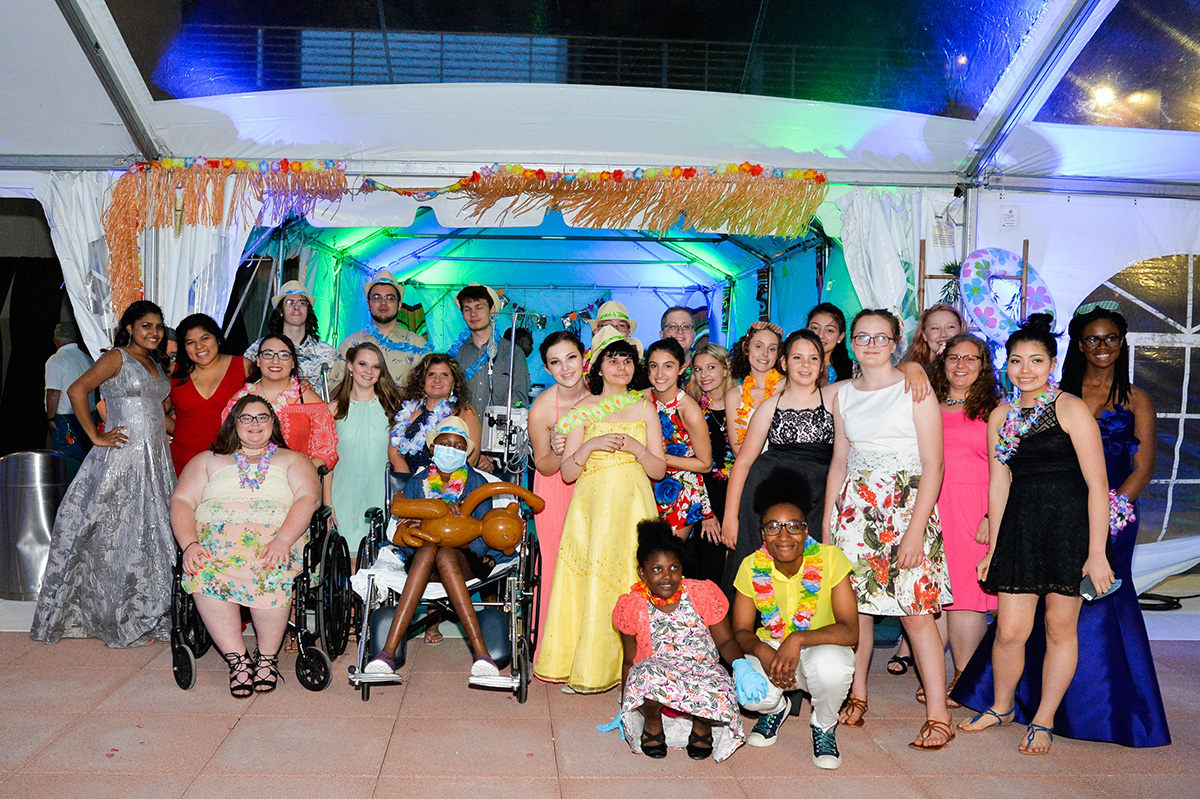 The night’s theme, “An Evening in the Tropics” was selected by half a dozen teen patients who were members of the Youth Advisory Council (YAC) and wished to be involved in the planning. The YAC also voted on the event’s games and activities, music, and menu items.

“It was, the way I looked at it, not a masterpiece, but it was what me and a few other people invented, what we helped out with, what we created,” Michael Reed, a 16-year-old outpatient and member of the YAC, told the Times Beacon Record.

Before dancing the night away, patients arrived for an evening of pampering with complimentary hair styling, makeup and nail services all provided inside the Hospital by volunteers from the New York Institute of Beauty. Hand-selected donated formal wear was also available, allowing all attendees to dress to impress. A waiting area with video games, suggested by the YAC, was set up for those who opted out of the pampering service.

An extra special moment of the night was when one teenage inpatient, who had her hair and nails done and had put on her dress, was given the go-ahead from doctors to attend the prom after it was originally thought she would be unable to leave the unit.

“It was so lovely to see her come down,” Joan Alpers, Director of Child Life Services, Stony Brook Children’s Hospital, shared with Times Beacon Record. “She wanted to be there so badly.”

Donned with lei, straw hats, corsages and boutonnieres, the teenagers enjoyed a night filled with red carpet worthy snapshots, dancing, and games like limbo.  The DJ and photo booth completed the traditional prom experience for the pediatric patients who might have been unable to attend their own prom due to hospitalization or who, due to life-limiting illness, may never get the opportunity.

“All we want to do is to bring a little normal to these kids lives,” Carolyn Santora, ‎Interim Chief Nursing Officer and Chief of Regulatory Affairs for Stony Brook University Hospital, told News 12 Long Island. “It’s a night they don’t have to worry about being in the hospital, having tests and procedures, or their diagnoses.”

With 104 beds, Stony Brook Children’s Hospital is Suffolk County’s only children’s hospital. More than 8,000 children and young adults are discharged each year. Stony Brook Children’s has more than 180 pediatric specialists in over 30 specialties. The hospital is Suffolk County’s only Level 4 Regional Perinatal Center and has a Level 3 Neonatal Intensive Care Unit. It is home to the nation’s first Pediatric Multiple Sclerosis Center and also offers a Pediatric Hematology/Oncology Program, Pediatric Cardiology Program, Pediatric HIV and AIDS Center, and Cystic Fibrosis Center. To learn more, visit