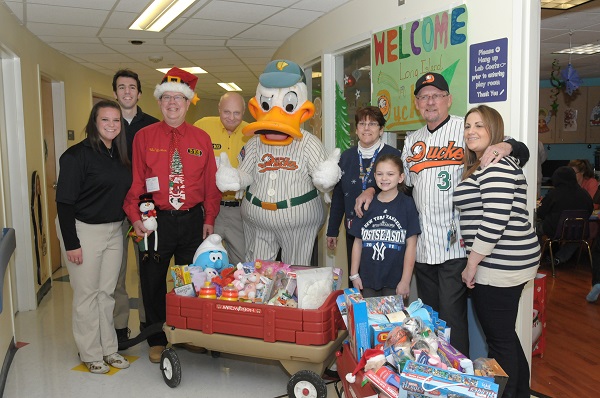 STONY BROOK, N.Y., December 18, 2013 – Long Island’s very own professional baseball team, the Long Island Ducks, were a big hit with patients at Stony Brook Children’s Hospital during a special visit for the holidays. Former New York Met Bud Harrelson, co-owner and Senior VP of Baseball Operations of the Ducks was joined by team mascot QuackerJack and radio station B103’s The Wiseman and Frank.

QuackerJack, flopped his way around the whole inpatient pediatric unit at Stony Brook Children’s Hospital on December 17, bringing wrapped toys to hospitalized patients. Autographs were signed, photos were snapped and there were even a few glimpses of Harrelson’s 1986 World Championship ring, which he received while playing for the Mets.

The visit was part of the Ducks’ annual Holiday Toy Drive, where QuackerJack and team members deliver toys to children in pediatric units in hospitals across Long Island. The month-long effort resulted in hundreds of children receiving toys this holiday season.

Popular to thousands of families on Long Island, the Ducks are members of the Atlantic League of Professional Baseball and play locally at Bethpage Ballpark in Central Islip.

STONY BROOK, NY, May 20, 2020 – Depression remains a leading disorder worldwide with treatments that have limited benefits for many patients. In order to better understand how inflammation in the brain is related to...

Beyond the Expect Podcast: Welcome Back Students