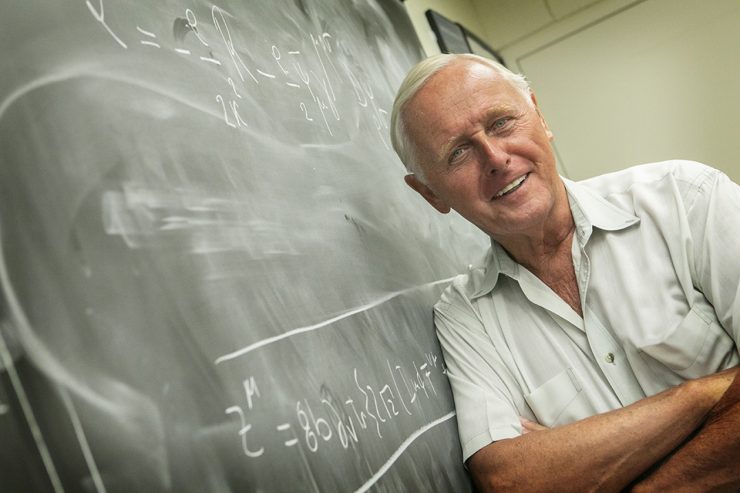 STONY BROOK, NY, August 6, 2019 — Peter van Nieuwenhuizen, distinguished professor of physics in the College of Arts and Sciences Department of Physics and the C.N. Yang Institute for Theoretical Physics at Stony Brook University, is one of three recipients of a $3 million Special Breakthrough Prize in Fundamental Physics, announced today. Dr. van Nieuwenhuizen is recognized along with theorists Sergio Ferrara of CERN and Daniel Z. Freedman of MIT and Stanford University* for their “invention of supergravity, in which quantum variables are part of the description of the geometry of spacetime.”

(*Editor’s Note: At the time of the discovery in 1976, Dr. Freedman was also on the faculty at Stony Brook University.)

Drs. van Nieuwenhuizen, Ferrara and Freedman are the architects of supergravity, a highly influential 1976 theory that successfully integrated the force of gravity into a particular kind of quantum field theory (a theory that describes the fundamental particles and forces of nature in terms of fields embodying the laws of quantum mechanics).

Dr. van Nieuwenhuizen’s research area is quantum field theory with applications to supergravity, supersymmetry, and string theory. He is interested in Kaluza-Klein reductions of supergravities, the measure for path integrals, instantons, and quantum corrections, as well as ideas such as a Chern-Simons term for 11 dimensional supergravity, anticommuting coordinates in a new kind of superspace. In the four decades since its development, supergravity has had a powerful influence on theoretical physics. It showed that supersymmetry was capable of accounting for all the phenomena we see in the real world, including gravity. It represented a completion of the current understanding of particle physics – a rigorous mathematical answer to the question, “What theories of nature are compatible with the principles of both quantum mechanics and special relativity?” And it provided a foundation for the attempt – still ongoing – to build a full theory of quantum gravity that describes space and time at a fundamental level.

Edward Witten, the chair of the Selection Committee, said, “The discovery of supergravity was the beginning of including quantum variables in describing the dynamics of spacetime. It is quite striking that Einstein’s equations admit the generalization that we know as supergravity.”

“When we think of the great works of the human imagination, we often mean art, music and literature,” said Yuri Milner, one of the founders of Breakthrough Prize. “But some of the most profound and beautiful creations are those of scientists. Supergravity has inspired physicists for decades and may contain deep truths about the nature of reality.”

“I am thrilled for Peter van Nieuwenhuizen on his receipt of the Special Breakthrough Prize in Fundamental Physics,” said Michael Bernstein, Interim President of Stony Brook University and Professor of Business, Economics, and History. “This honor is particularly meaningful for the Stony Brook community, as Peter’s groundbreaking supergravity research was conducted on our campus more than four decades ago. Congratulations to Peter for his outstanding contributions to this scientific field.”

The Breakthrough Prize in Fundamental Physics recognizes individuals who have made profound contributions to human knowledge. It is open to all physicists — theoretical, mathematical and experimental – working on the deepest mysteries of the Universe. This is the fifth Special Prize awarded: previous winners are Stephen Hawking, seven CERN scientists whose leadership led to the discovery of the Higgs boson, the entire LIGO collaboration that detected gravitational waves, and, last year, Dame Jocelyn Bell Burnell for her discovery of pulsars.

“It’s wonderful that Peter van Nieuwenhuizen’s collaboration on the invention of supergravity is receiving this significant honor,” said Nicole S. Sampson, PhD, interim dean of the College of Arts and Sciences and distinguished professor of chemistry. “Supergravity has been used as a tool for solving problems in physics and mathematics for decades, and Peter’s recognition is particularly timely given Stony Brook’s dedication to research and discovery in quantum information science to solve fundamental questions and train the next generation of quantum scientists.”

Dr. van Nieuwenhuizen received his PhD from Utrecht University in 1971. In 1993, he was awarded the Dirac Medal and Prize along with Ferrara and Freedman, and was elected a Fellow of the American Physical Society in 1994. In 2005, Dr. van Nieuwenhuizen was awarded the Heineman Prize along with Ferrara and Freedman. He lives in Stony Brook with his wife, Marie de Crombrugghe.

The 1960s and early ’70s saw the construction of the Standard Model, a quantum field theory that still remains the most precisely verified theory in physics, and whose achievements include the prediction of the Higgs boson. However, it was clear that the Standard Model was not complete. In particular, it described only three of the forces of nature: it left out gravity, which was the domain of Einstein’s theory of general relativity. It also retained some major puzzles, including masses of particles that were many orders of magnitude below their expected values, and the lack of any particle that could explain dark matter, the invisible substance that pervades the Universe.

Then in 1973, physicists developed a principle, “supersymmetry,” which extended the Standard Model to include a new family of particles. Supersymmetry postulated that each of the known particles had an unseen “partner:” the fermions (such as electrons and quarks, which make up matter) had bosons (force-carrying particles) as partners; while the bosons (such as photons of light) had corresponding fermions. Though the existence of these “super-bosons” and “super-fermions” is yet to be confirmed experimentally, supersymmetry is an attractive idea because of its explanatory power. It relates the characteristics of fermions and bosons as manifestations of an underlying symmetry – much as different shapes might represent a single object reflected in a mirror. And it offers solutions to some of those perplexing puzzles in the Standard Model, including a mechanism explaining the tiny particle masses, and a natural candidate for dark matter, which – like the hypothesised super-bosons – is massive but invisible.

But for supersymmetry to describe the phenomena we do see around us – like apples falling to Earth and the Sun rising – it would have to be extended to include gravity. This was the task that Ferrara, Freedman and van Nieuwenhuizen set their minds to. Beginning with discussions between Ferrara and Freedman at the École Normale Supérieure in Paris in 1975, continuing via collaboration with van Nieuwenhuizen at Stony Brook University, and culminating in a laborious series of calculations on a state-of-the-art computer, they succeeded in constructing a supersymmetric theory that included “gravitinos” – a super-fermion partner to the graviton, the gravity-carrying boson. This theory, supergravity, was not an alternative theory of gravity to general relativity, but a supersymmetric version of it: the algebra they used in the theory included variables representing part of the geometry of spacetime – geometry which in Einstein’s theory constitutes gravity.

In 1981, Edward Witten showed that the theory can be used to give a rather simple proof of what had been an extremely complicated theorem in general relativity. Soon after that, supergravity was integrated into string theory – which is actually equivalent to supergravity when describing low-energy interactions – and it was a crucial ingredient in the 1984 proof by Michael Green and John Schwarz that put superstring theory on a stable mathematical footing. Supergravity also played an important role in work by Cumrun Vafa and Andrew Strominger on quantum black holes, and later in the development by Juan Maldacena and others of “holographic” theories of gravity.

About the Breakthrough Prize

For the seventh year and renowned as the ‘Oscars of Science,’ the Breakthrough Prize will recognize the world’s top scientists. Each prize is $3 million and presented in the fields of Life Sciences (up to four per year), Fundamental Physics (one per year) and Mathematics (one per year). In addition, up to three New Horizons in Physics and up to three New Horizons in Mathematics Prizes are given out to junior researchers each year. Laureates attend a live televised award ceremony designed to celebrate their achievements and inspire the next generation of scientists. As part of the ceremony schedule, they also engage in a program of lectures and discussions.

Information on the Breakthrough Prize is available at www.breakthroughprize.org.