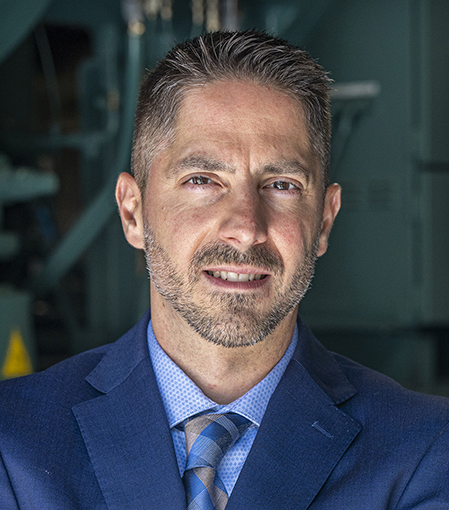 STONY BROOK, NY–September 23, 2019–Stony Brook University Campus Energy Manager Thomas Lanzilotta was recently named Regional Energy Manager of the Year by the Association of Energy Engineers (AEE). The AEE, comprised of over 18,000 members, recognizes individuals and companies for their dedication and performance in the energy industry.

“Stony Brook represents 18% of the total energy used by SUNY, and 8% of the total energy used in all New York State-owned buildings,” said Dean Tufts, Vice President for Facilities and Services. “With SUNY being the largest consumer of energy of all state agencies, and Stony Brook University being the largest consumer within SUNY, Tom and our team have had a direct and profound impact in reducing energy consumption for the entire state of New York.”

Lanzilotta joined the University in 2012 as the Campus Energy Manager after receiving his Master’s Degree in Energy Management. Since beginning his career at Stony Brook, his responsibilities have increased and now include Campus Sustainability.  As an employee of the Department of Energy Management, Lanzilotta coordinates energy efficiency overseeing more than $65 million dollar’s worth of energy reduction projects and in his first two years, was involved with approximately 30 projects. Even as the University expanded and more than 600,000 square feet of new buildings have been added since Lanzilotta began, he has continued to  reduce the overall energy consumption of the University. In addition to monitoring and analyzing campus data, he has also helped design, manage, and implement the installation of a complete metering system on campus.

“Tom has played a key role in analyzing and identifying ways to reduce energy on campus and has acted as Stony Brook University’s  liaison to Regional Utilities and New York State Agencies such as PSEG, National Grid, and NYSERDA resulting in over $1.5-million in rebates, grants, and utility errors,” said Terence Harrigan, Associate Vice President for Facilities and Services. “He is an energetic employee who has great aspirations for the University’s Department of Energy Management and its role as an energy efficiency leader.”

“Tom is fully committed to providing the University with the highest quality. His accomplishments have exceeded our expectations and his determination and resolve motivates everyone around him,” said Michael Martino, Director of Utilities in the office of Campus Operations & Maintenance at Stony Brook. “He is always pushing forward and has already adopted and taken steps towards achieving the NYS goals recently published in the NYS Clean Energy Roadmap.”

Lanzilotta will receive his award at the AEE World Energy Conference and Expo being held on September 24th in Washington D.C. The conference is the nation’s largest energy efficiency conference and expo designed for business, industrial and institutional energy users.