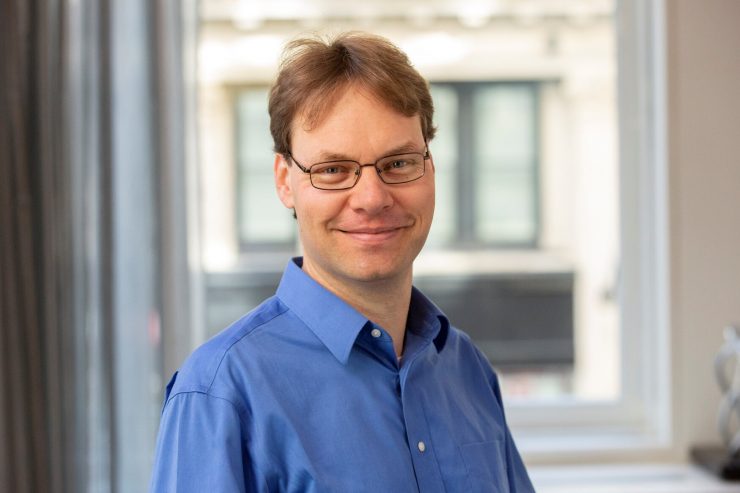 STONY BROOK, NY, September 17, 2020 — Rouven Essig, PhD, Associate Professor in the C.N. Yang Institute for Theoretical Physics (YITP) and Department of Physics and Astronomy in the College of Arts and Sciences at Stony Brook University, is a 2020 recipient of the New Horizons in Physics Prize by the Breakthrough Prize Foundation. Essig is recognized along with three colleagues from other institutions, Javier Tiffenberg, Fermilab; Tomer Volansky, Tel Aviv University; and Tien-Tien Yu, University of Oregon, for “advances in the detection of sub-GeV dark matter especially in regards to the SENSEI experiment.”

At a time when the importance of scientific achievement resounds around the world with more urgency than ever, the Breakthrough Prize continues its nine-year tradition of honoring the most profound and transformative discoveries, celebrating established researchers with the Breakthrough Prize, as well as early-career scientists with the New Horizons Prize. Six New Horizons Prizes of $100,000 each were shared among 12 early-career scientists and mathematicians who have already made a substantial impact on their fields. The prize is funded by a grant from the Milner Foundation.

Essig is a co-spokesperson of the SENSEI (Sub-Electron Noise Skipper CCD Experimental Instrument) Collaboration, a dark matter direct-detection experiment with unprecedented sensitivity to several types of dark matter particles including dark-photons and axion like particles.

“Rouven’s work engages the most pressing questions in fundamental physics,” said George Sterman, SUNY Distinguished professor and Director of the YITP. “In addition, he is an outstanding mentor in research and a highly-regarded classroom instructor. It is especially gratifying that the New Horizon prize recognizes Tien-Tien Yu, who began her work on the SENSEI experiment as a YITP postdoc working with Rouven.”

Essig is a theoretical particle physicist whose research focuses on the search for dark matter and other new particles and forces beyond those that are known. He has helped pioneer several novel detection concepts for detecting dark matter with masses below the proton and has been a leader in establishing this as a new and important research direction, which is now attracting significant theoretical and experimental efforts. He has also been a leader in conceiving of and motivating new fixed-target experiments to search for new forces, helping to spawn several new efforts.

“Rouven’s transformative research and open-minded thinking are expanding our understanding of the structure of the Universe,” said Nicole S. Sampson, Dean of the College of Arts and Sciences and a SUNY Distinguished Professor of Chemistry. “I offer warm congratulations to Professor Essig for his well-deserved prize.”

Essig’s work draws on a range of topics in physics, including particle and astroparticle physics, cosmology, and condensed matter physics. Although a theorist, he is co-leading experiments searching for dark matter and new forces, including the SENSEI dark matter search experiment.  He has received a 2012 Sloan Fellowship, the 2015 American Physical Society’s Division of Particles and Fields Henry Primakoff Award, and a 2019 Simons Investigator Award.

“I feel honored to receive this prize, and I am also thrilled to be sharing it with Tien-Tien Yu, a former postdoc at the YITP at Stony Brook and now a faculty member at the University of Oregon, as well as Javier Tiffenberg and Tomer Volansky,” said Essig. “I am grateful for the many opportunities that have been afforded to me and that allow me to follow my curiosity and pursue a career in physics. My endeavors have been greatly aided and enabled by the support of many fantastic mentors, colleagues, and friends, at Stony Brook and elsewhere. It is a privilege to have the opportunity to work with so many smart scientists at all career stages, including all members of the SENSEI Collaboration, each of whom enables this amazing experiment.”

About the Breakthrough Prize:

For the ninth year the Breakthrough Prize, renowned as the “Oscars of Science,” will recognize the world’s top scientists. Each prize is $3 million and presented in the fields of Life Sciences (up to four per year), Fundamental Physics (one per year) and Mathematics (one per year). In addition, up to three New Horizons in Physics Prizes, up to three New Horizons in Mathematics Prizes and up to three Maryam Mirzakhani New Frontiers Prizes are given out to early-career researchers each year. Laureates attend a gala award ceremony designed to celebrate their achievements and inspire the next generation of scientists. As part of the ceremony schedule, they also engage in a program of lectures and discussions.