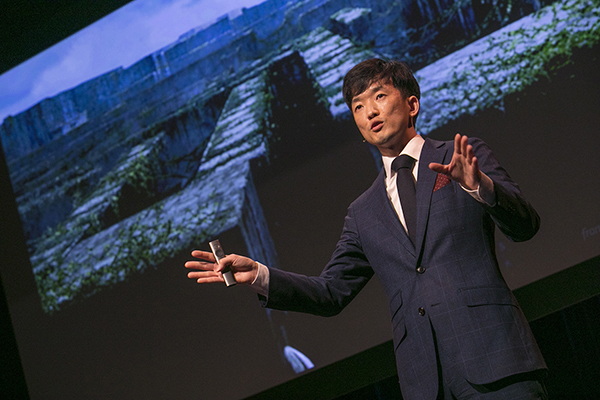 Stony Brook, NY, April 24, 2019 – Dr. Il Memming Park and three Stony Brook early career research colleagues took the stage on April 23, and presented their high risk, high reward concepts to a panel of prestigious judges at the 2019 Discovery Prize competition in the Charles B. Wang Center Theatre at Stony Brook University. Park, an assistant professor in the Department of Neurobiology and Behavior in the Renaissance School of Medicine and College of Arts and Sciences at Stony Brook University, emerged as the winner for his project which uses neurotechnologies and machine learning methods to better understand the brain trapped in unconscious states. With the prestigious award that will help advance his research thesis comes $200,000 in new funding, meant to spur future funding for Park’s research.

Unique to the Discovery Fund Prize competition is its aim to further the art of effective science communication through the involvement of the Alda Center for Communicating Science at Stony Brook University. To prepare, the finalists worked with Stony Brook University’s Alda Center for Communicating Science public speaking experts on how to engage listeners and present their work in a compelling yet academically rigorous pitch.

at University of Texas Southwestern Medical Center; Barry S. Coller, MD, David Rockefeller Professor of Medicine, Physician in Chief and Vice President for Medical Affairs at the Rockefeller University; and, James H. Simons, PhD, Chairman of the Simons Foundation; founder of Renaissance Technologies and former Chairman of the Mathematics Department at Stony Brook University. (Editor’s note: The fourth judge, Ann E. McDermott, PhD, the Esther and Ronald Breslow Professor of Biological Chemistry at Columbia University, was unable to attend due to an emergency).

“Our nation’s vitality and competitiveness depend on the many discoveries made at research universities,” said Samuel L. Stanley Jr., MD, President of Stony Brook University. “It is critical that we continue to support fundamental, curiosity-driven research and encourage our ambitious early-career faculty to pursue audacious ideas, which have the potential to transform lives and our understanding of the world around us.”

Seven time Emmy Award-winner, Academy Award nominee, Alan Alda, who is a visiting professor in the Alda Center for Communicating Science, opened the competition after having met the faculty competing for the Prize.

“I am exhilarated by winning the Discovery Prize, and the award will help me get to the next stage of my research is to develop the neurotechnology further and apply it to biological models of the brain,” he said. “I am looking forward to expanding collaborations on this research with colleagues in neurobiology, neurosurgery and other disciplines at Stony Brook University.”

How the Discovery Prize has enabled scientific advancement for previous winners

Laurie Krug, PhD, Associate Professor in the Department of Molecular Genetics and Microbiology, the first Discovery Prize winner, said “The Discovery Prize has provided a tremendous boost to my lab’s research.” Her research aims to discover new genes that the gamma herpes viruses need to infect and takeover specific cells. Finding such genes would provide new molecular targets to combat the cancers that gamma herpesviruses promote when they infect cells. Since winning the prize, her work has progressed, and she was recently awarded a National Institutes of Health Small Business Innovation Research (SBIR) grant to further her investigation and its potential applications. She also published a research paper, “Gene Delivery to Mammalian Cells using a Graphene Nanoribbon Platform,” in the Royal Society of Chemistry’s Journal of Materials Chemistry B.

More About the finalists

Il Memming Park aims to understand how information is represented and computations are implemented in the brain in milliseconds to seconds time scale. He designs interpretable statistical models and machine learning methods specialized for neural time series. He earned his PhD in biomedical engineering from the University of Florida (2010), and trained with Jonathan Pillow at University of Texas at Austin as a postdoctoral fellow (2010-2014). He collaborates closely with experimentalists who record from animal and human brains to uncover the hidden internal state dynamics underlying normal and abnormal cognition.

The Chiu research group studies how chemical reactions work in order to devise ways to make molecules and arrange them into larger constructs. Just as the design of a building ideally reflects its functions, the Chiu group studies how the architecture of molecules and molecular assemblies can be harnessed to achieve new or desired properties. For example, Melanie’s proposed project seeks to construct self-reproducing nanocapsules, which could lead to new generations of self-healing materials and have implications for studying the origins of life. Other work in the Chiu group utilizes light to control polymerization reactions, which can then be used to tailor the polymers’ material properties.

Ming’s Discovery Prize proposal aims to develop resource-efficient, sustainable, and clean chemical reactions that harness renewable and free sunlight to convert a greenhouse gas, carbon dioxide (CO 2 ), into valuable chemicals. An abundant, non-toxic, and inexpensive gas, CO 2is well-known for its association with anthropogenic climate change and can serve as a versatile and inexhaustible C 1 -building block to produce carbon-based fuels and value-added chemicals such as pharmaceuticals, agrochemicals, and functional materials. However, chemical functionalization of CO 2 has been hampered by its high kinetic inertness and thermodynamic stability. To overcome this intrinsic energy barrier, his team will establish a dual catalyst system consisting of visible-light photoredox catalysts to capture, activate and photo-catalytically reduce molecular CO 2 , and harness the resulting •CO 2 ‒ intermediate for further synthetic transformations. Accomplishment of his proposed research will: (i) revolutionize synthetic approaches to the preparation of high-value chemicals from the simple, non-toxic, and cheap feedstock, CO 2 ; (ii) generate the versatile CO 2 ‒ moiety at ambient temperature and provide a new strategic chemical bond formation; (iii) make better use of both energy and carbon; (iv) store solar energy in the form of carbon-based fuels and chemicals; and (v) create new knowledge in CO 2 capture, reduction, and utilization.

About the Discovery Prize

Established with a generous donation from the Stony Brook Foundation’s Board of Trustees in 2013, the Discovery Prize is used to advance pioneering scientific breakthroughs at a time when the primary source of support for basic research (i.e., the federal government) is dwindling. It is a pathway to capitalize on new technologies, new innovations, new and imaginative ideas, and the urgency to move discovery driven knowledge forward by investing private dollars in basic research that is free of commercial or political pressures.

Stony Brook’s reinvigorated mission of funding fundamental research was inspired by the new Science Philanthropy Alliance. Formed by seven United States foundations, including the Simons Foundation, the Alliance aims to mitigate the federal government’s disinvestment in pioneering scientific investigation. Stony Brook’s Discovery Fund contributes to the Alliance’s goal to generate philanthropic funds totaling at least $1 billion annually within five years. Stony Brook has a history of encouraging untethered pursuit of scientific discovery, as demonstrated by the paradigm shifting work of Nobel Laureate Professors Paul Lauterbur and C.N. Yang. In keeping with the University’s goal of supporting early-career faculty, eligibility for the Prize is open to faculty members who, at the time of application, have a tenure-track Assistant Professor appointment or are no more than five years beyond tenure and promotion at the Associate Professor level.