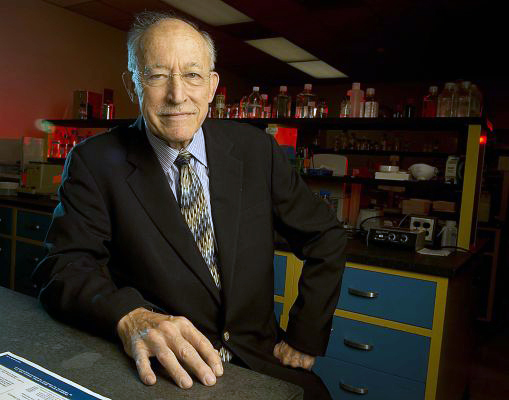 The annual award honors alumni who exemplify Johns Hopkins tradition of excellence and have brought credit to the university through their personal accomplishments, professional achievement and humanitarian service. Dr. Grollman and other alumni honorees were formally recognized at an award presentation, this past June 9.

Dr. Grollman received his M.D. from the Johns Hopkins School of Medicine in 1959, after earning a B.A. in Chemistry from the University of California at Berkeley. Following internship and residency in Internal Medicine at Johns Hopkins, he conducted research at the National Institutes of Health.

In 1974, Dr. Grollman was appointed founding Chairman of the Department of Pharmacological Sciences at Stony Brook University and Evelyn G. Glick Professor of Experimental Medicine in 1990. Under his leadership, the department has consistently ranked among the top Departments of Pharmacology in the United States. Dr. Grollman has published more than 250 papers in the fields of molecular biology and cancer research.  His current research interests focus on the biological consequences of DNA damage, and DNA repair.

Research in the Grollman laboratory was instrumental in establishing the mechanism of action of various antitumor agents and chemical carcinogens, and in defining the biochemical pathway that protects cells against oxidative DNA damage. Currently, he directs a global medicine research program focusing on the environmental causes of, and early detection of, cancer. These studies have recently received several national and international awards.