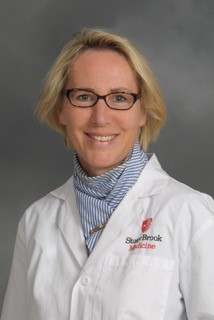 Stony Brook, New York – April 20, 2017  ̶  Stony Brook University School of Medicine physician-scientists Ute Moll, MD, and Maurizio Del Poeta, MD, have been elected into the prestigious Association of American Physicians (APP). The AAP recognizes individuals who have demonstrated outstanding professional achievement in the pursuit of medical knowledge and the advancement of clinical science through experimentation and discovery. Both physicians will be inducted as AAP members at the organization’s annual meeting in Chicago on April 22.

Dr. Del Poeta and Dr. Moll will join only eight other current and former Stony Brook University School of Medicine faculty as members of the AAP.

Dr. Moll, Professor and Vice Chair for Experimental Pathology in the Department of Pathology, is an internationally renowned cancer biologist recognized for her seminal discoveries about the important p53 tumor suppressor gene – the most frequently mutated gene in cancer – and related gene family members in cancer development, and normal tissue functions. Dr. Moll discovered two important transcription-independent death functions of the wildtype p53 protein acting directly on mitochondria, a previously unrecognized site of action of p53 in the cell. Upon cell damage, p53 induces apoptosis by interaction with the Bcl2 family, key cell death regulators. She also identified a critical interaction of p53 with the mitochondrial pore regulator CypD in activating ischemic necrosis that causes tissue loss. She showed that blocking the destructive p53 interaction with CypD by cyclosporine A (a drug used routinely in transplantation medicine) strongly protects mice from stroke. Dr. Moll is a leader in mutant p53 translational research, proving with engineered mouse models the oncogenic gain-of-function of mutant p53 and its therapeutic exploitability as drug target.

She has also made numerous fundamental contributions to scientists’ understanding of the p63 and p73 genes. For example, she unravelled their complex roles in cancer and uncovered surprising unique roles in normal tissue specification and function. She showed that p63 is the essential guardian of the male germ line in hominids. She also showed that p73 is essential for enabling normal germ cell maturation, and for maintaining neural stem cell pools in the brain. Most recently, Dr. Moll discovered that p73 is the master regulator that produces ciliated cells in airways, as p73-deficient mice exhibit key features of human chronic obstructive pulmonary disease (COPD). This discovery potentially opens new therapies for chronic lung diseases.

Dr. Moll is also a highly recognized Stony Brook mentor for students and junior faculty. Her currently 22 postdocs have largely moved into academic careers and 11 are holding professorships, eight of which are women.

Dr. Del Poeta, a Professor in the Department of Molecular Genetics and Microbiology, has contributed widely to the field of microbial pathogenesis. He discovered that sphingolipids are essential regulator of infectious diseases caused by fungal microorganisms. Dr. Del Poeta identified a new lipid molecule, called glucosylceramide, which is localized on the surface of fungal microorganisms that controls their pathogenicity by allowing the infectious particles to replicate in the alveolar spaces and in the bloodstream of infected hosts. Most recently, he identified a new class of antifungals that specifically target the synthesis of fungal and not mammalian glucosylceramide.

Continually funded by federal and private agencies for his research, Dr. Del Poeta is internationally recognized in the field of fungal pathology to and sphingolipid-mediated infectious diseases. Dr. Del Poeta has also developed a new class of antifungal agents with a broad spectrum of activity against a variety of fungi and with low or no toxicity against mammalian cells. He teamed up with Dr. Iwao Ojima, Director of the Institute of Chemical Biology and Drug Discovery (ICB&DD), for the research and development of this new class of antifungal agents. With the support of the Stony Brook University Center of Biotechnology and collaborator Brian McCarthy, Dr. Del Poeta co-founded MicroRid Technologies Inc., a start-up company centered on brining this new class of antifungal agents to the market.

Dr. Del Poeta is also involved in a research program at the Northport Veterans Affairs Medical Center, where he studies host susceptibility to infectious diseases. His research program at the VA investigates why certain patients are more susceptible to infectious diseases than others in conditions in which there is no evidence of immunodeficiency. These studies may reveal the identification of new markers or new traits that could predict the susceptibility of particular patients to a specific infection.

Founded in 1885, the AAP has more than 1,700 active members in the US, Canada and other countries. AAP members include Nobel laureates, members of the National Academy of Science and the Institute of Medicine. Election as an AAP member provides the opportunity for members to more broadly share their scientific discoveries and contributions with their colleagues worldwide.