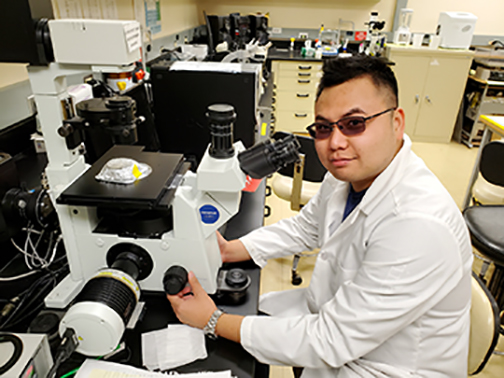 STONY BROOK, NY, April 10, 2019 –Jiajie Cen, a doctoral student in the Department of Materials Science and Chemical Engineering in the College of Engineering and Applied Sciences, is the recipient of national award for his research analyzing and developing new materials to generate sustainable energy. The American Chemical Society (ACS), the world’s largest scientific society, has recognized Cen’s research and is awarding him the 2019 Graduate Student Award in Environmental Chemistry.

Alexander Orlov, PhD, Cen’s PhD supervisor and Associate Professor of Materials Science and Chemical Engineering, says Cen has a remarkable record of research productivity in the area of novel approaches to sustainable energy and has already published 18 journal and 15 conference peer reviewed publications on various sustainable energy topics. The ACS is awarding Cen specifically for his discovery of new materials to convert solar energy into chemical fuels.

The ACS awards up to only 20 graduate students nationally each year who show promise via their research to make an impact in the field of environmental chemistry.

The award includes a one-year membership into the ACS and $125.