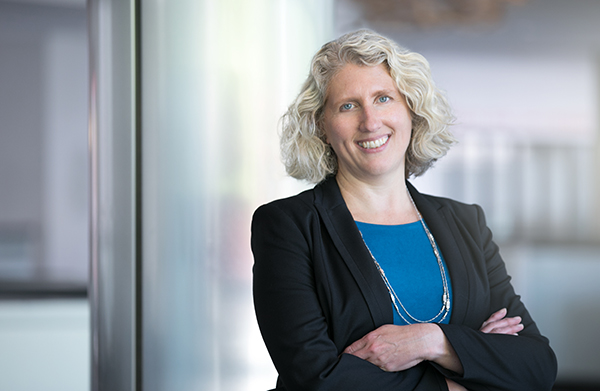 “Nicole has been an indispensable leader throughout her role as Interim Dean,” says Zhang. “In that time, she developed a comprehensive vision for the future of CAS, all while stewarding the College into a stronger financial position. Her tireless work to unite members of the College community and to elevate the stature and impact of the College is evident through the numerous initiatives already launched, and those in development.”

The collaborative shared vision developed by numerous stakeholders across the University including highly committed faculty and the College community, is a Navigational Guide to 2030 with plans for education, research and mentorship based on constellations of strength within the College. This guide anticipates the challenges of the next decade and boldly charts the way forward to a convergent, innovative, and sustainable future.

Throughout her 28 years as a researcher and educator, Dr. Sampson has mentored more than 40 doctoral students and taught organic chemistry to thousands of undergraduate students. She has championed expanded opportunities for all students through their coursework and research, providing inspiration for the next generation to pursue their passions.

A distinguished professor in the Department of Chemistry, Dr. Sampson completed her undergraduate studies at Harvey Mudd College in Claremont, CA, and completed her PhD at the University of California, Berkeley. After holding an American Cancer Society postdoctoral fellowship at Harvard, she joined Stony Brook University in 1993 as an Assistant Professor of Chemistry, later serving as chair of the Department from 2012-2017. She previously served as an Associate Dean in the College of Arts and Sciences, and is currently a member of the Biochemistry and Structural Biology Graduate Program as well as of the Molecular and Cellular Pharmacology Graduate Program. She founded and served as Co-Director (2010-2019) of a Chemical Biology Training Program funded by the National Institutes of Health (NIH) and is a founding faculty member in Stony Brook’s Institute for Chemical Biology and Drug Discovery.

Dr. Sampson’s research interests span from unraveling the molecular intricacies of mammalian fertilization to finding new treatments for tuberculosis and cholera. She has received more than $17 million in research support primarily from the NIH and the National Science Foundation. She has authored more than 100 peer-reviewed articles, reviews, and issued patents. Her awards include the Arthur C. Cope Scholar Award and the Pfizer Award in Enzyme Chemistry, both from the American Chemical Society, and she is a Fellow of the American Chemical Society. She currently serves on the Board of Directors of Brookhaven Science Associates, the entity that manages Brookhaven National Laboratory.