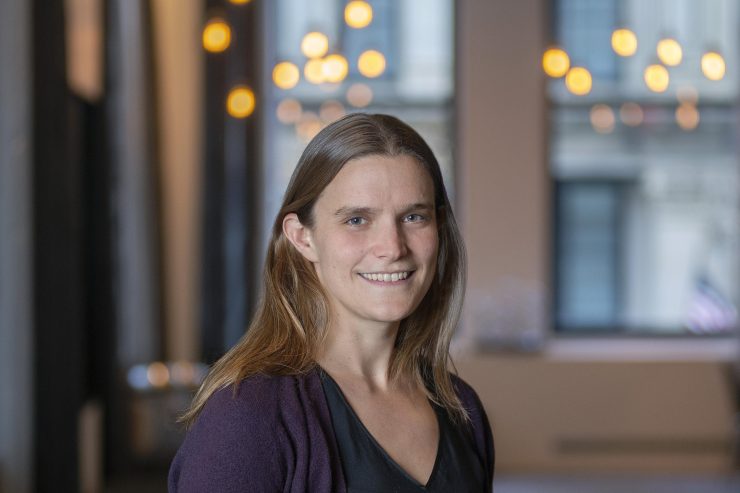 STONY BROOK, NY, August 17, 2020 – A team of international physicists including Jennifer Cano, PhD, of Stony Brook University, has created a new material layered by two structures, forming a superlattice, that at a high temperature is a super-efficient insulator conducting current without dissipation and lost energy. The finding, detailed in a paper published in Nature Physics, could be the basis of research leading to new, better energy efficient electrical conductors.

The material is created and developed in a laboratory chamber. Over time atoms attach to it and the material appears to grow – similar to the way rock candy is formed. Surprisingly, it forms a novel ordered superlattice, which the researchers test for quantized electrical transport.

The research centers around the Quantum Anomalous Hall Effect (QAHE), which describes an insulator that conducts dissipationless current in discrete channels on its surfaces. Because QAHE current does not lose energy as it travels, it is similar to a superconducting current and has the potential if industrialized to improve energy-efficient technologies.

“The main advance of this work is a higher temperature QAHE in a superlattice, and we show that this superlattice is highly tunable through electron irradiation and thermal vacancy distribution, thus presenting a tunable and more robust platform for the QAHE,” says Cano, Assistant Professor in the Department of Physics and Astronomy in the College of Arts and Sciences at Stony Brook University and also an Affiliate Associate Research Scientist at the Flatiron Institute’s Center for Computational Quantum Physics.

Cano and colleagues say they can advance this platform to other topological magnets. The ultimate goal would be to help transform future quantum electronics with the material.

The collaborative research is led by City College of New York under the direction of Lia Krusin-Elbaum, PhD. The research is supported in part by the National Science Foundation (grant numbers DMR-1420634 and HRD-1547830).