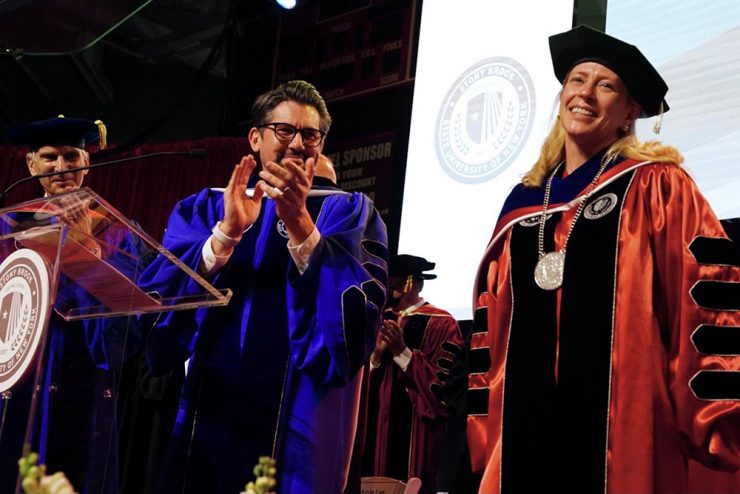 STONY BROOK, NY–November 2, 2021–Providing her vision for what she described as a “luminous, ambitious future,” Maurie McInnis was officially inaugurated as the sixth president of Stony Brook University on Saturday, Oct. 23 at Island Federal Arena, before an enthusiastic crowd of faculty, staff, students, alumni, family and friends, along with local officials and representatives from colleges and universities from across the country. 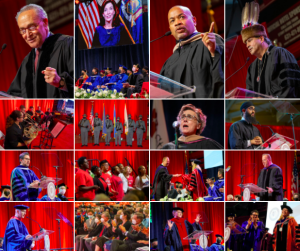 McInnis referenced Nobel Prize-winning physicist Chen-Ning (CN) Yang, who came to Stony Brook in 1965 and became the first director of Stony Brook’s Institute for Theoretical Physics. Yang was one of the many scholars and students who came to the university in the early days, “who wanted to join us and do something great. Who wanted to meet the future with creativity and collaboration. Who wanted to be united, for the next century, by curiosity and ambition.”

“Looking around the arena here today, I see that same, bold spirit that attracted Yang and legions of other distinguished faculty,” she said.

McInnis spoke of the importance of education in her family: From her great-grandparents who were teachers in a two-room schoolhouse in rural Florida; her grandfather, a teacher and a high school principal; her parents, both college professors; her husband, Dean a first-generation college graduate; and her children, Ian and Fiona, currently navigating the college process themselves.

Kevin Law ’82, chair of the Stony Brook Council, welcomed the assembled to the ceremony, followed by a traditional welcome, delivered by Chief Harry Wallace of the Unkechaug Nation, representing all of Long Island’s tribal nations. Governor Kathy Hochul supplied a video message of congratulations, followed on the stage by United States Senator Chuck Schumer.

“She is going to do a great, great job, and we are all excited about her being here,” Schumer said of McInnis. “Congratulations to the entire Stony Brook University community, it truly is a great day for all of us.”

Richard Gelfond, chair of the Stony Brook Foundation, who has been involved with Stony Brook the better part of his life since he graduated in 1976, and who was a representative on the presidential search committee, said they met some amazing candidates and, “it was so clear that Maurie was the most dynamic individual with the intellectual backbone, and the vision that was so sorely needed at Stony Brook, to move us to the next level.”

Cary Staller of the SUNY Board of Trustees reaffirmed his support to President McInnis for the work that lay ahead, “to elevate this University to an entirely new level. She’s world-renowned in her own right, as a cultural historian and an extraordinary collaborator, bringing people together to solve the most complex issues across society today. She’s an excellent communicator, an active listener, and [we] are fortunate to have her leadership.”

Also offering congratulatory remarks were faculty representative Richard Larsen; staff representative Kimberly Joy Dixon, who is SBU director of employer engagement and diversity recruitment; and, Manjot Singh, president of the Undergraduate Student Organization, who spoke as a representative of undergraduate and graduate students. This was followed by a musical interlude performed by the Stony Brook Gospel Choir singing “Lift Up Your Voices.” Remarks were then provided by Edward Ayers, president emeritus of the University of Richmond and a longtime friend of the president, who provided insights about McInnis’ trajectory through academia, scholarship as an art historian, and administration in public higher education which led her to Stony Brook University, calling her “a teacher who has grown into a leader.”

SUNY Chancellor Malatras said, “Students from New York and around the globe have come to Stony Brook University for a world-class education that has been built up for nearly 65 years. It has facilitated groundbreaking research, launched successful careers in a wide variety of fields, and propelled students to greater social mobility, and Dr. Maurie McInnis is the right leader at the right time who is well positioned to take this university to new levels of excellence. Today, the entire SUNY family celebrates the inauguration of President McInnis and under her focused and steadfast leadership we look forward to the future of this university community.”

Alumni Association president Ahmed Belazi then spoke to round out the ceremony, which was concluded with another performance by the Amityville American Legion Pipe Band.

“That is my goal, and my honor as the President of one of the most innovative public research universities in the world: to ensure that Stony Brook University is leading the way, serving our community, and tackling the global challenges that face us in the coming century,” she said.

“This is the work that we’ll set out to do, together, in the next decade. And, I look forward to seeing all we can achieve. The moment is upon us, Seawolves. Let’s answer the call to greatness.”

During the week-long Inauguration celebration, symposia were offered in which President McInnis took part or was a featured speaker, including:

The full text of President Maurie McInnis’ remarks can be found here.