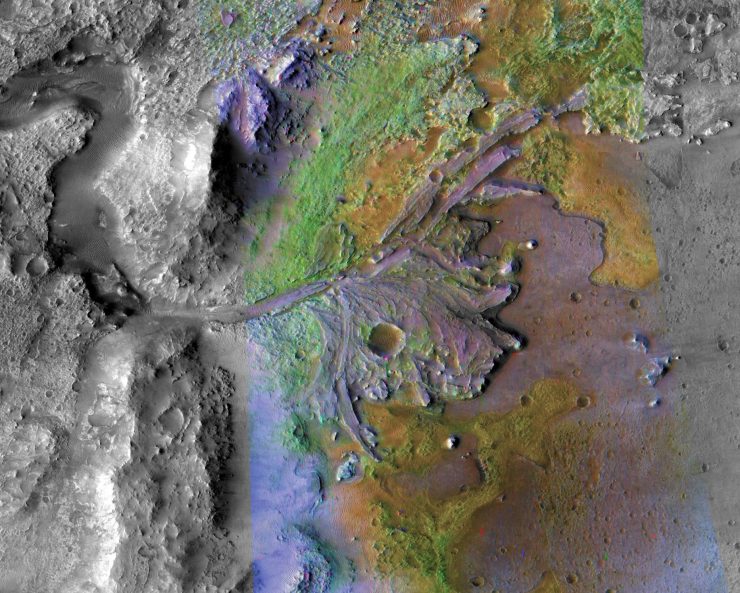 STONY BROOK, NY, March 8, 2021 – A new study that characterizes the climate of Mars over the planet’s lifetime reveals that in its earliest history it was periodically warmed due to the input of greenhouse gases derived from volcanism and meteorites, yet remained relatively cold in the intervening periods, thus providing opportunities and challenges for any microbial life form that may have been emerging on the Red Planet. The study involved a national team of scientists that included Joel Hurowitz, PhD, of Stony Brook University. The findings are detailed in a paper published in Nature Geoscience.

The authors, led by Dr. Robin Wordsworth of Harvard University, point out that reconciling the geology of Mars with models of atmospheric evolution remains a major challenge because Martian geology is characterized by past evidence for episodic surface liquid water, and geochemistry indicating a slow and intermittent transition from wetter to drier and more oxidizing surfaced conditions. In “A coupled model of episodic warming, oxidation and geochemical transitions on early Mars,” the research team presents a new model incorporating randomized injection of reducing greenhouse gases and oxidation due to hydrogen escape in order to investigate the conditions responsible for the diverse geological observations.

“Mars was intermittently warmed when its atmospheric composition was altered by the input of gases derived from volcanism and meteorite impactors. These climate optima allowed water to flow across the surface, forming rivers and lakes, and the rocks and minerals we associate with water on Mars,” explains Hurowitz, Associate Professor in the Department of Geosciences in the College of Arts and Sciences at Stony Brook University.

Hurowitz is a member of the research team working on the NASA Mars 2020 Mission Perseverance Rover and is one of the scientists who worked on the PIXL (Planetary Instrument for X-ray Lithochemistry) that is attached to the arm of the rover.

“This paper proposes a model for climate variation on Mars that can be tested with measurements of the chemistry and minerology of rocks by PIXL and the Perseverance rover in Jezero Crater,” says Hurowitz.

The authors also write that the model also predicts transient buildup of atmospheric oxygen, which can explain the occurrence of oxidized mineral species such as the manganese oxides that have been observed in Gale Crater by the Curiosity rover. They further point out that large-scale temporal changes in the surface mineralogy of the planet can be explained by a combined outcome of increasing planetary oxidation, decreasing groundwater availability and a waning meteorite impactor flux, which dramatically slowed the remobilization and thermochemical destruction of surface sulfates.

The authors point out that in the Solar System of the present, Earth is the only planet that has an oxygen-rich atmosphere, which suggests oxygen could serve as a biomarker gas in the hunt for evidence of life on exoplanets. However, they write, “Our model predicts long-lived, relatively oxygen-rich atmospheres for Mars in the middle period of its history without requiring the presence of life, indicating that oxygen detection alone can be a ‘false positive’ for life in some circumstances.

“Because prebiotic chemistry does not occur in highly oxidizing environments, this work places constraints on the time periods and locations in which life could have originated and persisted on early Mars.”

They conclude that the climate model they propose of early Mars environments suggests opportunities for the “emergence of life during warm, wet intervals when reducing conditions would have favored prebiotic chemistry, but also challenges for the persistence of surface life in the face of frequent and, through time, lengthening intervals of mainly cold and dry oxidizing environments.”