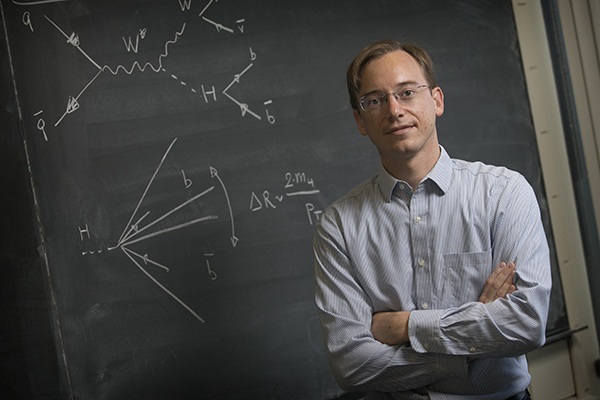 Today at CERN, the Large Hadron Collider collaborations ATLAS and CMS jointly announced the discovery of the Higgs boson transforming into bottom quarks as it decays. This is predicted to be the most common way for Higgs bosons to decay, yet was a difficult signal to isolate because background processes closely mimic the subtle signal. This new discovery is a big step forward in the quest to understand how the Higgs enables fundamental particles to acquire mass.

“A fraction of Higgs bosons could be producing dark matter particles as part of their decay,” said Giacinto Piacquadio, a NSF funded physicist at Stony Brook University who co-led the Higgs-to-bottom-quarks analysis group. “Because the decay of the Higgs boson to bottom quarks is so common, we can use it to put constraints on potentially invisible decays as well as use it to probe for new physics directly.”

CERN, the European Organization for Nuclear Research, is the world’s leading laboratory for particle physics. It has its headquarters in Geneva. At present, its member states are Austria, Belgium, Bulgaria, the Czech Republic, Denmark, Finland, France, Germany, Greece, Hungary, Israel, Italy, the Netherlands, Norway, Poland, Portugal, Romania, Slovakia, Spain, Sweden, Switzerland and the United Kingdom. Cyprus, Slovenia and Serbia are associate members in the pre-stage to membership. India, Lithuania, Ukraine, Turkey and Pakistan are associate members. Japan, the Russian Federation, the United States of America, the European Union, JINR and UNESCO have observer status.

The National Science Foundation (NSF) is an independent federal agency that supports fundamental research and education across all fields of science and engineering. In fiscal year (FY) 2018, its budget is $7.8 billion. NSF funds reach all 50 states through grants to nearly 2,000 colleges, universities and other institutions. Each year, NSF receives more than 50,000 competitive proposals for funding and makes about 12,000 new funding awards.

Brookhaven National Laboratory is supported by the Office of Science of the U.S. Department of Energy. The Office of Science is the single largest supporter of basic research in the physical sciences in the United States, and is working to address some of the most pressing challenges of our time. For more information, please visit science.energy.gov.