Is Kelp the New Kale for Long Island? 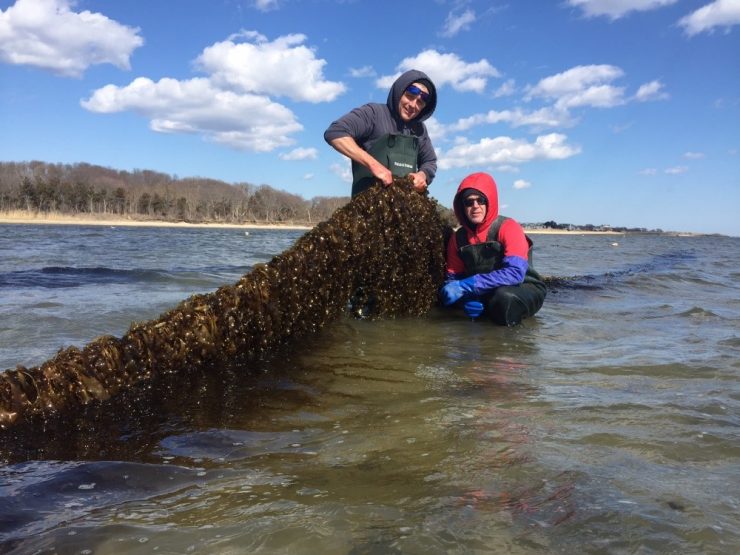 Southampton, NY, April 25, 2019 – In recent years, seaweeds have been notorious for washing up and fouling beaches on Long Island. Now, a collaborative team of scientists and marine farmers have demonstrated that the seaweed, sugar kelp, can be cultivated in the shallow estuaries of Long Island, a breakthrough that may unlock a wealth of economic and environmental opportunities for coastal communities.

And beyond its remarkable nutritional profile, kelp holds the promise to improve water quality across Long Island waters. While some aquaculture practices such as fish farms are known to pollute waterways, the combined farming of kelp and oysters is recognized as “regenerative and restorative” aquaculture, as the organisms collectively sequester nitrogen and carbon from estuaries. Furthermore, the kelp alone produces oxygen, combats ocean acidification by removing carbon dioxide, and may even combat harmful algal blooms.

“Being able to grow sugar kelp in shallow water is only the first part of the story,” emphasizes Michael Doall. “Sugar kelp will only be a viable crop on Long Island if there’s a market for it and if it can be profitable. In the next phase of our study, we will be engaging local chefs, restaurateurs, and other food industry professionals to evaluate market acceptance and demand for Long Island farmed kelp. Our early results indicate strong interest from the foodie community.”

“If sugar kelp can be profitably farmed in shallow water estuaries,” Gobler concluded, “it would be a true a win-win proposition for Long Island, benefiting both local economies and the marine environment.”