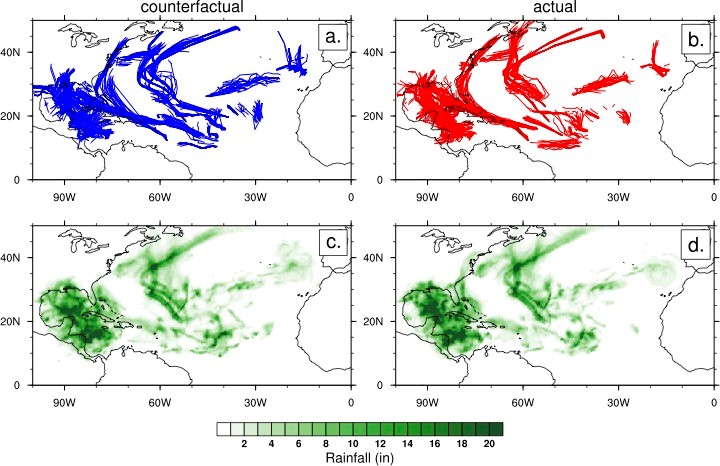 The finding from a computer modeling study of the 2020 Atlantic hurricane season, published in Nature Communications, may be a dire indicator of future storms

STONY BROOK, NY, April 12, 2022 – A study that analyzed the entire 2020 North Atlantic hurricane season, in conjunction with human activity that affects climate change, found that hourly hurricane rainfall totals were up to 10 percent higher compared to hurricanes that took place in the pre-industrial (1850) era. Led by Kevin A. Reed, PhD, of the School of Marine and Atmospheric Sciences (SoMAS) at Stony Brook University, the study findings, which are published in Nature Communications, are another indicator of the effect of climate change on rainfall totals.

The release of this study follows a new Intergovernmental Panel on Climate Change (IPCC) Report that found nations are not doing nearly enough to prevent global warming to dangerous levels. According to the National Oceanic and Atmospheric Administration (NOAA), the 2020 North Atlantic hurricane season shattered storm records, and led to a record of billions of dollars in damage.

To hear Reed’s opinion about the overall effect of climate change on extreme weather patterns, see this brief video on twitter.

The 2020 North Atlantic hurricane season was one of the most active on record, producing a record 30 named storms producing heavy rains, storm surges, and winds. Estimates of the total impact of damage from the storms range to about $40 billion. According to Reed and colleagues, human activities, which include industrial growth, continue to increase the amount of greenhouse gases in the atmosphere. This has resulted in a more than a 1.0 degree C increase in the global surface temperature, as of 2020 compared to 1850. This increase in temperature led to increases in sea surface temperature in the North Atlantic basin of 0.4 to 0.9 degrees C during the 2020 season.

“Hurricanes are devastating events, and storms that produce more frequent hourly rain are even more dangerous in producing damage flooding, storm surge, and destruction in its path,” says Reed, Associate Professor and Associate Dean of Research at SoMAS. “Our findings indicate that environmental changes caused by humans are signaling more and quicker rainfall, which have direct consequences for coastal communities and sometimes outlying areas.”

The research team applied something called hindcast attribution (similar to a weather forecast, but for an event in the past) methodology to objectively quantify the impact of climate change on extreme rainfall throughout the entire 2020 North Atlantic hurricane season. They used the Community Earth System Model (CESM) Large Ensemble that encompasses transient simulations from the year 1850 onward to estimate the environmental changes caused by humans.

Reed says that the work represents the first study to apply hindcast attribution to all storms in one season, from the least to most intense. Previously published work has focused on high impact, strong hurricanes with direct damages to coastlines.

“An increase in hurricane rainfall due to global warming is not surprising,” said Michael Wehner, a senior scientist at the Lawrence Berkeley National Laboratory and one of the study co-authors. “What is surprising is that the amount of this human caused increase is so much larger than what is expected from increases in humidity alone. This means that hurricane winds are becoming stronger as well.”

To quantify the impact of human-induced climate change on the rainfall for that 2020 season, the researchers ran a series of hindcast simulations encompassing the entire season with a specific component of CESM called the Community Atmosphere Model (CAM).

Reed and colleagues found with this modeling analysis that extreme rainfall rates over 3-hour timeframes and extreme 3-day accumulated rainfall amounts for tropical strength storms increased by 10 percent and 5 percent, respectively, compared to the pre-industrial era before 1850. They also indicate that for hurricane-strength storms the human-induced effect was 11 percent and 8 percent, respectively.

The researchers urge that these findings bear watching, and other modeling should be performed to confirm the findings on increasing hourly rainfall totals during the 2020 hurricane season, and for other hurricane seasons.

“These changes in extreme rainfall associated with the North Atlantic hurricane season are an illustration of the likely climate change impacts on tropical cyclone rainfall in other ocean basins,” write Reed and his co-authors.

This research was supported in part by the Stony Brook Foundation and the Department of Energy Office of Science (award # DE-SC0016605). High-performance computing support was provided by the National Center for Atmospheric Research’s Computational and Information Systems Laboratory, sponsored by the National Science Foundation.