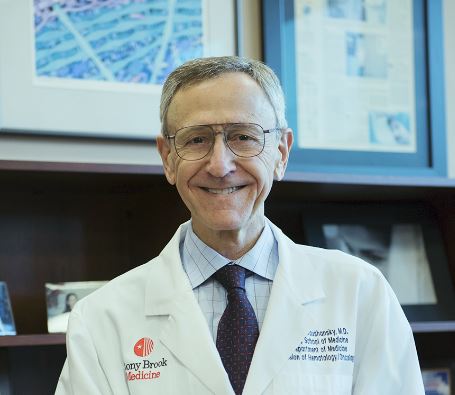 STONY BROOK, N.Y., December 12, 2018 – Kenneth Kaushansky, MD, MACP, Senior Vice President of the Health Sciences and Dean of the Renaissance School of Medicine at Stony Brook University, has been elected a Fellow of the National Academy of Inventors (NAI).

Election as an NAI Fellow is the highest professional distinction accorded to academic inventors who have demonstrated a prolific spirit of innovation in creating or facilitating outstanding inventions that have made a tangible impact on the quality of life, economic development and welfare of society. Dr. Kaushansky will be inducted as an NAI Fellow during its 2019 national meeting in Houston on April 10.

Dr. Kaushansky, a physician-scientist specializing in hematology, is known internationally for his seminal research on the molecular biology of blood cell production. He began his clinical and research career at the University of Washington, where he rose to become Section Chief of Hematology and received several NIH grants. While at the University of Washington, and subsequently at the University of California, San Diego, Dr. Kaushansky and his research team cloned several of the genes important in the growth of differentiation of blood cells, including thrombopoietin, a key regulator of stem cell and platelet production. He and colleagues then established that thrombopoietin exerts a profound influence on hematopoietic stem cells and affects the expression of a number of transcription factors that influence stem cell fate decisions. This work also led to a better understanding of the pathobiology of several congenital disorders of platelet and stem cell production.

Prior to coming to Stony Brook in 2010, Dr. Kaushansky was the Helen M. Ranney Professor and Chair of the Department of Medicine at the University of California, San Diego School of Medicine, where he grew the department’s research, educational and clinical impact.

During his tenure at Stony Brook thus far, Dr. Kaushansky has spearheaded the expansion of academic programs and training within the School of Medicine and Health Sciences and has overseen the development of the Medical and Research Translation (MART) Building. With its opening next month, the MART will serve as an incubator for new approaches to understanding the causes for, and treatments of cancer, using sophisticated imaging and informatics, work that is expected to lead to many more Stony Brook Medicine inventions.