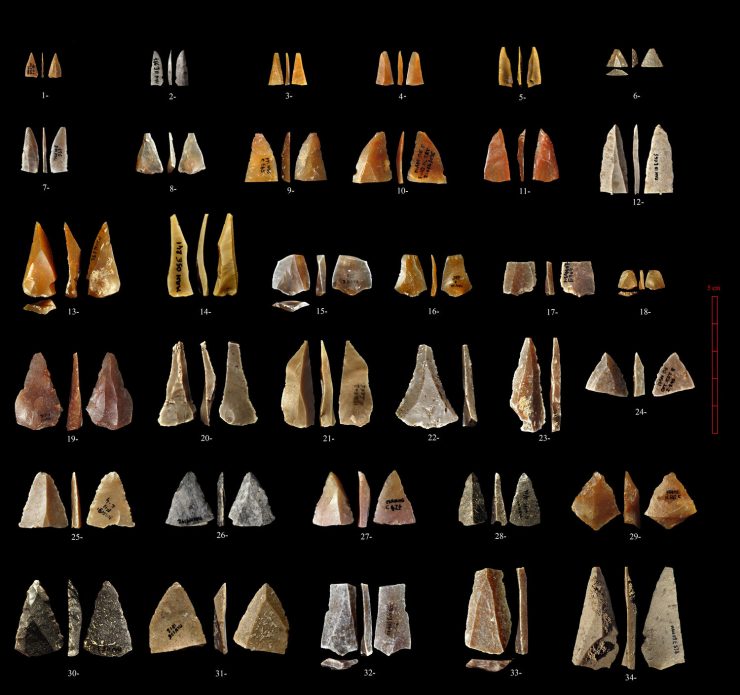 STONY BROOK, NY, February 10, 2022 – Some 30 years of archeological and other types of scientific research around the ancient artifacts and human remains in the Grotte Mandrin, located in the Rhone River Valley in southern France, has revealed that humans may have arrived in Europe about 10,000 years earlier than originally thought. This conclusion, drawn by an international team of researchers including Jason Lewis, PhD, of Stony Brook University, will help scientists rethink the arrival of humans into Europe and their replacement of and interactions with Neanderthals who also lived in the cave. The research is detailed in a paper published in Science Advances.

Previous studies have suggested that the first modern humans reached the European continent – originally from Africa and via the Levant, the eastern Mediterranean crossroads – between 43,000 and 48,000 years ago. But this discovery of modern human presence in the heart of the Rhone River Valley at Grotte Mandrin points to about 54,000 years ago.

The area of the cave excavated and analyzed that proved the evidence of modern human presence is Mandrin’s Layer E. It is sandwiched between 10 other layers of artifacts and fossils that contain evidence of Neanderthal life.

“The first curious signal to emerge during the initial decade of excavations were thousands of tiny triangular stone points, resembling arrowheads, some less than a centimeter in length,” explains Lewis. “These had no technical precursors or successors in the surrounding Neanderthal layers.”

Lewis explained that the well-preserved cave, discovered in the 1960s, includes uppermost layers that contain materials from the Bronze Age and Neolithic periods. But over the past quarter century, the international scientific team has analyzed three meters of sediment and evidence from the Paleolithic – a period when Neanderthals and their ancestors occupied Europe and periodically had contact with evolving modern humans.

The consensus theory until now was that these modern humans expanded into the southeastern European region about 50,000 years ago and the Neanderthals progressively disappeared.

The research involved analyses of various types of hundreds of fossils, stone tools, and ancient human teeth. The team used radiocarbon and luminescence dating, DNA and other molecular testing, and lithic technological analysis.

“I joined the team in 2014 to obtain the first luminescence dates at the site,” explains Frouin. “Due to advances in our dating methods and new collaborations that developed a few years later, we were able to put together a precise and robust timeline for when modern human and Neanderthals were there.”

Intriguingly, the international scientific team also determined that the evidence of humans at and around the ancient cave showed they occupied the territory for only one or two generations. Then, they disappeared just as mysteriously and quickly as they had arrived and Neanderthals reoccupied the region and site.

“Our overall discovery changes the landscape regarding the time humans arrived into Europe and raises other questions, some of which we think we can answer and others that require more investigation,” adds Lewis

Such questions are: How did modern humans know about the stone resources around the cave in France around the varied landscape in such a short time? Did they have relationships with Neanderthals, such as exchanging of information, goods and acting as guides? Did these two hominin groups interbreed more frequently than science has previously suggested? Additional discoveries from Mandrin will soon be announced that will shed light on these and other questions about our ancient ancestors.

Yearly excavations at the site are supported by the Service Régional de l’Archéologie Auvergne Rhône-Alpes, the French CNRS, and the city of Malataverne. Frouin’s luminescence dating work was supported by the European Research Council (ERC) under the European Union’s Horizon 2020 research and innovation program (grant agreement no. 681605) and the Seventh Framework Program (FP7/2007-2013)/ERC grant no. 324139 (“PalaeoChron”).