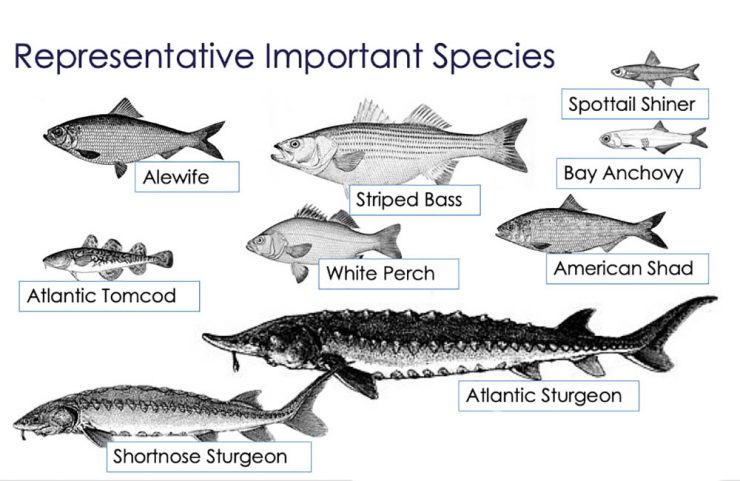 Stony Brook, NY and New Orleans, LA, December 5, 2019 – An extraordinary scientific collection of archived fish, as well as fish and water quality data taken from the Hudson River over more than five decades, has been gifted by the integrated energy company, Entergy Corporation (Entergy), to the Stony Brook University (Stony Brook) School of Marine and Atmospheric Sciences (SoMAS).

What is now known as the Hudson River Collection (the Collection) began in the 1960’s as “one of the most ambitious environmental research and assessment programs ever performed” on an iconic River that was a focal point for the nascent U.S. environmental movement. As it grew, the Collection became unique, variously referred to as “probably the best dataset on the planet,” “unequalled globally in its duration and its spatiotemporal frequency” and “extraordinarily important, because it provides a retrospective and unbroken view of the ecological health of the estuary over time.”

The Collection includes Indian Point-sponsored, digitized survey data for the full complement of fish species (approximately 170) available to the sampling gear in the approximately 150-mile Hudson River Estuary (from the Battery to the Troy Dam), and the associated water quality and Indian Point-specific biological information. The Collection also includes the associated archived fish specimens, consisting mostly of preserved early life stages of Estuarine fish, numbering approximately 50 million individuals. The database is unequalled, and the specimens from the Collection represent among the largest held by any U.S. museum or university, placing Stony Brook among a handful of renowned institutions, such as the Smithsonian.

Entergy also has made a substantial donation of seed capital to advance Stony Brook’s goal of groundbreaking scientific study related to the Collection – study that dovetails with SoMAS’s expertise on coastal, marine, estuarine ecosystems, including biodiversity, population genetics, climate change and disease.  The Collection’s digitized databases make them readily usable “big data,” susceptible to the cutting-edge statistical methods and advanced computing on which Stony Brook excels.

“This donation positions Stony Brook as a leader in developing innovative forms of multidisciplinary science endeavors,” said Michael A. Bernstein, Interim President of Stony Brook University. “I am confident that our unparalleled access to the Hudson River Collection will result in extraordinary research opportunities.”

“We want to thank the New York State Department of Environmental Conservation and leading scientists for supporting us in our search for the right home for the Collection,” said Mike Twomey, Senior Vice President, Federal Policy, Regulatory and Government Affairs for Entergy.  “SoMAS and Stony Brook are the right home for an unparalleled Collection, one that we could not be more pleased to give.”

Paul Shepson, Dean of SoMAS, echoed those thanks, underscoring that the Collection will not only advance SoMAS’s standing as a leading research and educational institution, but enable scientists and their students to better understand a wide range of subjects, beginning with the environmental drivers within the Hudson River ecosystem and aquatic ecosystems in general.

“The Collection’s data and samples will enable leading scientists to develop collaborative and interdisciplinary research projects, leading to new discoveries that will be instrumental in understanding changes in estuarine and marine environments both locally and worldwide,” said Shepson. “We are both excited and grateful to Entergy for entrusting Stony Brook with such an incredible and unprecedented collection.”

About Stony Brook University
Stony Brook University, widely regarded as a SUNY flagship, is going beyond the expectations of what today’s public universities can accomplish. Since its founding in 1957, this young university has grown to become one of only four University Center campuses in the State University of New York (SUNY) system with over 26,000 students, more than 2,700 faculty members and 18 NCAA Division I athletic programs. Our faculty have earned numerous prestigious awards, including the Nobel Prize, Pulitzer Prize, Indianapolis Prize for animal conservation, Abel Prize and the inaugural Breakthrough Prize in Mathematics. The University offers students an elite education with an outstanding return on investment: U.S. News & World Report ranks Stony Brook among the top 40 public universities in the nation. Its membership in the Association of American Universities (AAU) places Stony Brook among the top 62 research institutions in North America. As part of the management team of Brookhaven National Laboratory, the University joins a prestigious group of universities that have a role in running federal R&D labs. Stony Brook University fuels Long island’s economic growth. Its impact on the Long Island economy amounts to $7.38 billion in increased output. Our state, country and world demand ambitious ideas, imaginative solutions and exceptional leadership to forge a better future for all. The students, alumni, researchers and faculty of Stony Brook University are prepared to meet this challenge.

SoMAS is the State University of New York’s designated center for marine sciences and a leader in marine, atmospheric and sustainability research, education, and public service. Currently, there are more than 500 undergraduate and graduate students and 90 faculty and staff from 16 different nations working together to better understand how our marine, terrestrial, and atmospheric environments function, are related to one another and how they and their associated living resources may be sustained for future generations. Research at SoMAS explores solutions to a variety of issues facing the world today ranging from local problems affecting the area around Long Island to processes that are impacting the entire globe.