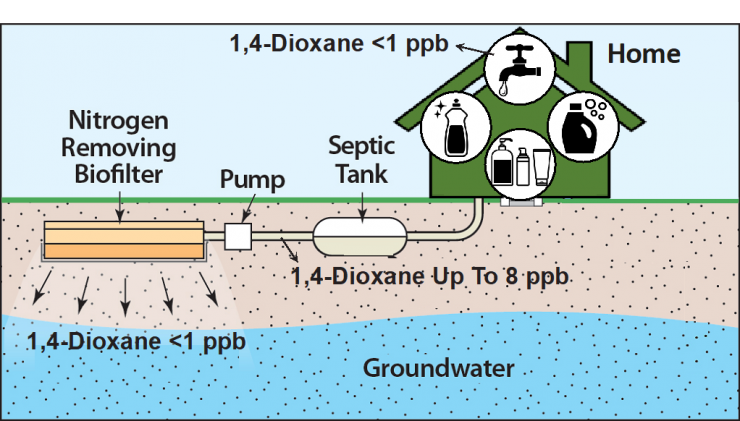 STONY BROOK, NY, March 2, 2021 – The New York State Center for Clean Water Technology (CCWT) at Stony Brook University has made a series of critical discoveries regarding a new approach to protecting Long Island’s drinking water, groundwater, and surface waters. Some of the discoveries involve the likely human carcinogen, 1,4-dioxane, which has been found at higher levels in Long Island drinking water than anywhere else in the U.S.

The CCWT is advancing its novel technology for removing this chemical and other contaminants such as nitrogen before it enters groundwater. In addition, scientists affiliated with the Center have recently published research affirming household products as a likely source of 1,4-dioxane in wastewater.

According to Chris Gobler, PhD, Director of the CCWT, and Endowed Chair of Coastal Ecology and Conservation in the School of Marine and Atmospheric Sciences, 1,4-dioxane has been found at the highest levels ever measured in drinking water across the U.S. due to a large industrial plume. More recently, there has been the suggestion that beyond industrial contamination, 1,4-dioxane is also present at very high levels in common household products such as detergents, deodorants, and shampoos but evidence of this has been lacking.

Excessive nitrogen has shown to cause harmful algal blooms, the loss of important aquatic habitats like seagrass meadows, and the collapse of shellfisheries like clams and scallops; high nitrate in drinking water is also a public health concern. The Center has developed a series of innovative Nitrogen Removing Biofilters (NRBs) that is comprised of layers of natural products commonly found across Long Island, sand and woodchips.

In a new paper published in Ecological Engineering, scientists from the Center demonstrate that their NRBs installed in Massachusetts and New York remove up to 80 to 90 percent of nitrogen from wastewater before it is discharged to the ground.

“In 2015, we set a goal to develop a septic system that reduces nitrogen from wastewater to less than 10 milligrams of nitrogen per liter,” says Dr. Gobler. “With this publication, we are showing the word we have met that goal and can achieve nitrogen levels lower than any commercially available system.”

The Center is also focused on the ability of NRBs to remove other contaminants of concern, including 1,4 dioxane. Scientists are collecting samples from homes outfitted with NRB septic systems, specifically tap water, influent wastewater, which represents sewage from existing homes and entering NRBs, and effluent (treated wastewater) existing from NRBs before it enters the groundwater and Long Island’s drinking supply.

In another paper published in Science of the Total Environment, the Center demonstrated that while tap water samples have levels of 1,4-dioxane less than one part per billion (ppb), the drinking water standard for NYS levels of 1,4-dioxane in the wastewater leaving homes consistently contained levels higher than tap water levels, peaking as high as eight ppb and increasing more then 10-fold on average.

Importantly, the results also show that the treated wastewater exiting the NRBs were, on average, 56 percent lower levels than the wastewater leaving the homes and was usually less than one ppb.

“The efficient removal of 1,4-dioxane from wastewater by the NRBs is a breakthrough finding, as the chemical 1,4-dioxane is extremely difficult to remove from contaminated water supplies with advanced oxidation processes being one of the only reliable approaches,” summarizes Dr. Gobler.

“The results are surprising and at the same time encouraging as 1,4-dioxane is expected to resist natural degradation processes and are not removed efficiently by filtration,” says Arjun VenKatesan, PhD, Associate Director for Drinking Water Initiatives at the Center. “Our team is performing controlled experiments to understand the mechanism by which 1,4-dioxane is removed by NRBs.”

According to Drs. Gobler and Venkatesan, the results could also have broad implications for Long Island. The Center has collected more than 12 months of data as it completed the experimental testing phase of NRBs in septic systems in Suffolk County and have entered into a pilot testing phase of the systems across the county.

The Center shared its findings with officials and other constituents at a Zoom event on February 26, 2021. In support of the Center’s efforts they shared their comments:

New York State Department of Environmental Conservation Commissioner Basil Seggos said, “New York State and our academic partners are leading the way in evaluating and addressing emerging contaminants like 1,4-dioxane and the threat they pose to our environment and our communities. The studies announced today bolster New York’s aggressive approach of preventing water contamination from 1,4-dioxane by eliminating it in household and personal care products, providing extensive resources including $14.5 million to support the Center for Clean Water Technology, investigating and remediating potential sources of contamination, and committing record funding for clean water infrastructure to protect drinking water quality on Long Island and across the state.”

Adrienne Esposito, Executive Director of Citizens Campaign for the Environment, said “CCE is thrilled that this new research further validates our four-year battle to ban 1,4-dioxane from products.  This type of cutting-edge science will further efforts to protect drinking water and surface water from both 1,4-dioxane and nitrogen. Strong, enforceable policies based on good science is the only way we can to continue to protect our aquifer and water resources for future generations.  I want to thank the team at Stony Brook for engaging in research that directly benefits public health and provides meaningful guidance for a cleaner, safer future,”.

“Last year, I worked closely with other state representatives to pass legislation to restrict the levels of 1,4-dioxane that would be permissible in household products,” said Assemblyman Steve Englebright, Chair of the Assembly Environmental Conservation Committee. “This study demonstrates how important that legislation was and how critically important it is that we now move swiftly to implement the action imposed by that bill.”

“I want to thank the New York State Center for Clean Water Technology for the amazing work they are doing to protect our region’s drinking water from 1,4-dioxane and other harmful groundwater contaminants,” said Senator Anthony Palumbo. “Their groundbreaking research on the origination of these containments not only shows us the scope of this problem but provides us with solutions on how to keep our drinking water safe. I will continue to work with our State and Federal partners to ensure we have the necessary funding and resources needed to combat 1,4-dioxane and ensure Long Islanders have access to clean and reliable drinking water for generations to come.”