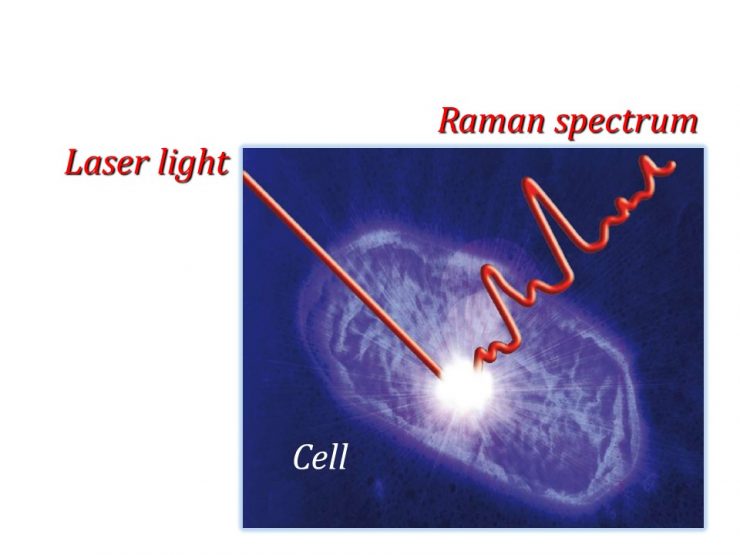 STONY BROOK, NY, November 4, 2019 – Raman microspectroscopy is a laboratory technique to produce molecular fingerprints of materials and biological specimens. However, to date fluorescence has interfered with effective application of this technique and limited its use. Now Gordon Taylor, PhD, a Professor in the School of Marine and Atmospheric Sciences (SoMAS) at Stony Brook University, and colleagues have devised a photochemical technique that suppresses fluorescence in sample preparation. This new technique may open the door to more efficient and highly resolved investigations of chemical distributions within individual cells. Their findings are published in Scientific Reports.

Characterizing cell-to-cell and intracellular variations in biochemistry is critical to mechanistic understandings in research that covers a broad area, including cancer, human development, cell biology, antibiotics exploration, and environmental biology. Laser-based Raman microspectroscopy is among only a few tools that scientists can use to effectively observe molecular distributions within intact individual cells.

Taylor and his team demonstrate how this technique overcomes analytical challenges presented by biological samples and figuratively “tears down the fluorescent curtain” in them for laser Raman microspectroscopy interrogation. Through this method they can trace cellular assimilation of isotopic tracers, document intracellular biochemical changes, and analyze diverse environmental samples.

“Previously, the samples we investigated were difficult if not impossible to analyze by Raman microspectroscopy,” says Gordon. “Our new technique could prove to be a game changer for many types of cellular research.”

The investigators so far have used the technique to analyze many cellular conditions, such as examining cell-to-cell variations in growth rates of phytoplankton (microalgae), observing viral infections inside phytoplankton cells, tracing movements of nutrients from marine bacteria into microbial predators, and identifying and quantifying microplastic particles in marine plankton samples.