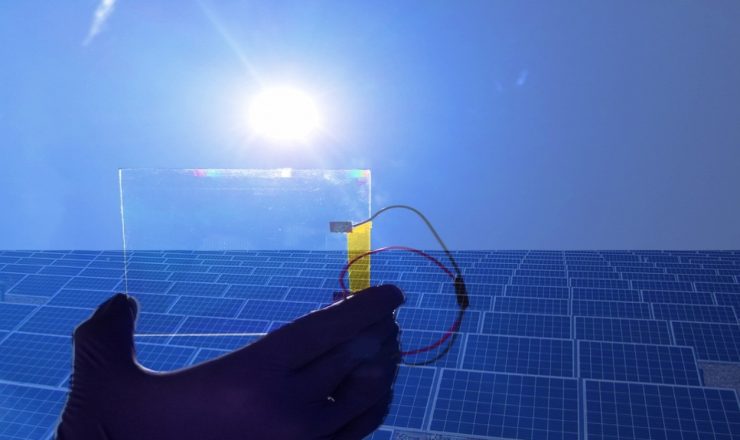 STONY BROOK, NY, April 15, 2021 – SuperClean Glass, Inc., a company that uses a solar panel-cleaning technology developed at Stony Brook University and a start-up mentored by the Clean Energy Business Incubator Program (CEBIP) at Stony Brook, has been named a finalist in the U.S. Department of Energy’s (DOE) American-Made Solar Prize for 2021. Superclean Glass was one of 10 companies named as finalists and will receive a $100,000 prize and an additional $75,000 in DOE vouchers to test their technologies.

Led by Founder and CEO Alexander Orlov, PhD, a Professor of Materials Science and Chemical Engineering in the College of Engineering and Applied Science, Superclean Glass has created an electro-dynamic shield that repels dust from solar panels. The process can save up to 98 percent of the energy typically lost on panels subjected to the outdoors, often in dusty regions.

The company has been recognized for its innovative technology early on during its existence as a CEBIP company. It recently received and “Oscar of Innovation” award from R&D World Magazine, and a PowerBridgeNY grant in 2018 to further develop the solar panel cleaning technology.

Superclean Glass, housed at the Long Island High Tech Incubator, is one of only three companies in New York State named as a finalist for the DOE American-Made Solar Prize and the only one from Long Island. For a broader description of the electro-dynamic shield repelling dust, see this video.

The American-Made Solar Prize is a $3 million competition designed by the DOE to revitalize solar manufacturing through a series of contests. It develops a diverse and powerful support network that leverages national laboratories, incubators, and other resources across the country. The finalists were named in the fourth round of the competition and selected from 20 research teams that presented their solar innovations to a panel of expert judges hosted by Carnegie Mellon University’s Wilton E. Scott Institute for Energy Innovation.

In September 2021, two winners from the finalists will be determined at a demo day. These winners will receive an additional $500,000 and up to $75,000 in vouchers to develop and test their prototypes.

About Stony Brook University:
Stony Brook University, widely regarded as a SUNY flagship, is going far beyond the expectations of today’s public universities. With more than 26,000 students, 2,700 faculty members, over 200,000 alumni, an academic medical center and 18 NCAA Division I athletic programs, it is one of only four University Center campuses in the State University of New York (SUNY) system. The University embraces its mission to provide comprehensive undergraduate, graduate, and professional education of the highest quality, and has been ranked among the top 35 public universities in the nation by U.S. News & World Report. Fostering a commitment to academic research and intellectual endeavors, Stony Brook’s membership in the Association of American Universities (AAU) places it among the top 65 research institutions in North America. The University’s distinguished faculty have earned esteemed awards such as the Nobel Prize, Pulitzer Prize, Indianapolis Prize for animal conservation, Abel Prize and the inaugural Breakthrough Prize in Mathematics. Part of the management team of Brookhaven National Laboratory of the U.S. Department of Energy, Stony Brook is one of only eight universities that has a role in running a national laboratory. Providing economic growth for neighboring communities and the wider geographic region, the University totals an impressive $7.23 billion in increased economic output on Long Island. Follow us on Facebook (https://www.facebook.com/stonybrooku/) and Twitter (@stonybrooku).

SPECIAL UPDATE Vaccine Mandate Deadline Is Monday, September 27 As you are aware, the New York State Department of Health (DOH) has issued an order that all hospitals and nursing homes “continuously require all...