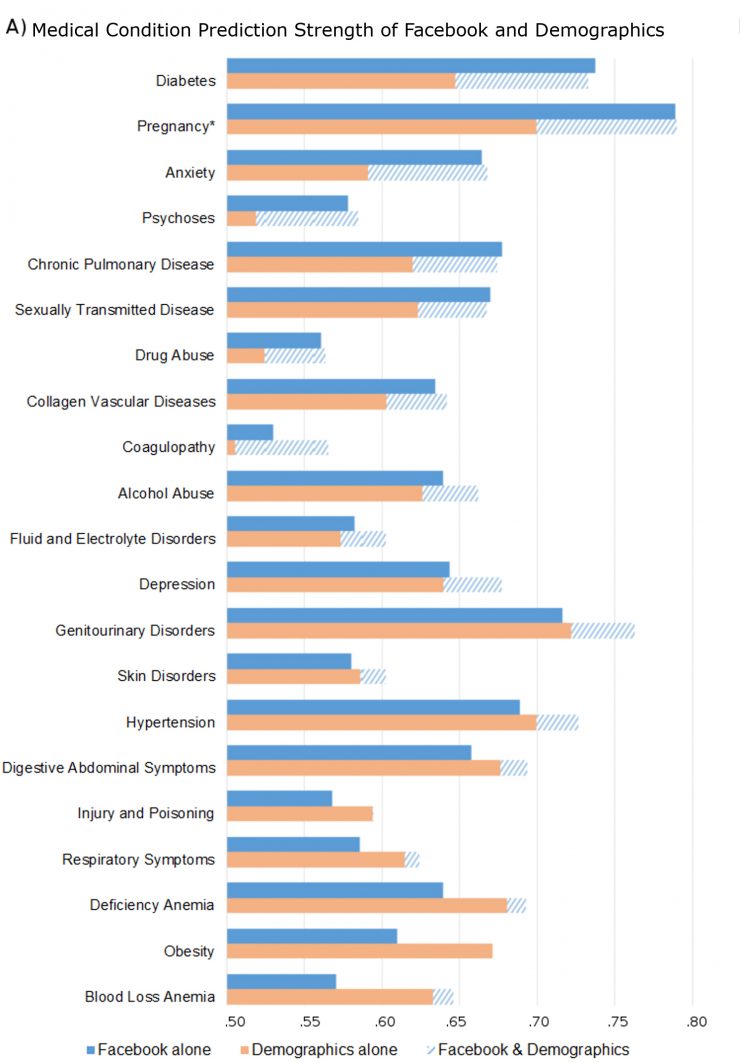 STONY BROOK, NY, June 19, 2019 – A new study reveals Facebook posts alone can predict some 21 diseases and conditions, many of them interrelated such as diabetes and hypertension, and anxiety and depression. This is one of the lead findings in a study published in PLOS ONE by researchers at Stony Brook University and Penn Medicine. The study, say the authors, has the potential with patient consent to use language in posts to not only predict disease but help monitor diseases just like physical symptoms.

The study included 999 participants who consented to share their social media posts and medical records. It involved an analysis of approximately 20 million words. The researchers looked at language patterns – words, phrases, clusters of related words — and their statistical association with 21 standard categories of medical record diagnoses indicating conditions.

“Our predictions from language captures diagnosis of diabetes about as well as predictions based on one’s body mass index,” says H. Andrew Schwartz, PhD, Senior Author and Assistant Professor of Computer Science in the College of Engineering and Applied Sciences at Stony Brook University, citing one key example of disease prediction accuracy from the study. “We can treat language pattern analogous to a genome and see similar diseases seem to have similar linguistic patterns.”

Further describing the method and its potential as a clinical tool, Schwartz, also a Visiting Assistant Professor at Penn in Computer and Information Science explains: “Our digital language captures powerful aspects of our lives that are likely quite different from what is captured through traditional medical data. Many studies have now shown a link between language patterns and specific disease, such as language predictive of depression or language that gives insights into whether someone is living with cancer. However, by looking across many medical conditions, we get a view of how conditions relate to each other, which can enable new applications for AI for medicine.”

“Our study is also important because most of the data tracked in medicine does not capture our everyday ecological and psychological factors that relate to health,” adds Schwartz. “With that Facebook posts have the potential as a tool to monitoring many common and widespread diseases.”

“The work is early, but our hope is that the insights gleaned from these posts could be used to better inform patents and providers about their health,” adds Raina Merchant, MD, MS, lead author and Director of Penn Medicine’s Center for Digital Health and Associate Professor of Emergency Medicine.

Three models were used to analyze the predictive power for the patients. One model only analyzed Facebook post language, another used demographics such as age and sex, and a third combined the two datasets. The researchers found that Facebook posts alone predicted all 21 conditions, and for 10 of the conditions Facebook better predicted them in comparison to demographic information.