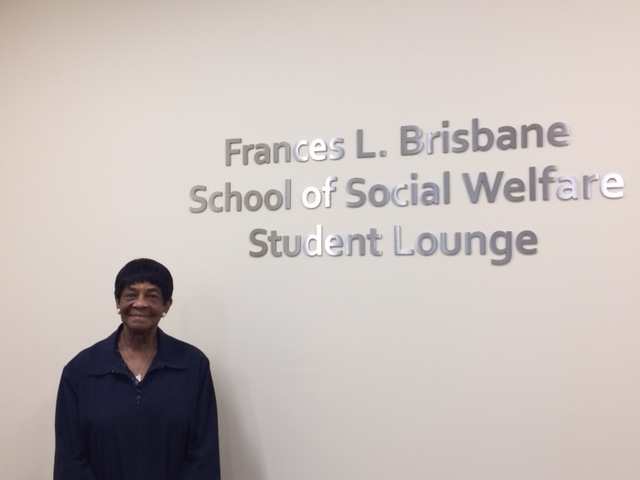 Dr. Brisbane Has Also Donated Nearly Another Half Million Dollars To SBU Through Payroll Deduction

STONY BROOK, NY — In a remarkable 46-year career — an extension of a lifetime spent devoted to helping others — one of Dr. Frances Brisbane’s most pivotal moments at Stony Brook University was a conversation she had upon arriving at the university with a custodian over a slop sink.

As Dr. Brisbane learned within minutes of setting foot on the Long Island, New York, campus for a faculty position, then custodian Elsie Owens knew far more about the newly established School of Social Welfare than where the brooms and mops were kept.

“The day that I came for my interview, Elsie met me at the front door,” recalled Dr. Brisbane, who would eventually serve as Dean of the School of Social Welfare.  “She had a dustpan in one hand, and a broom or a mop or something in the other hand. She said, ‘You’re Frances Brisbane?’ I said, ‘Yes.’ She said, ‘Before you go down there to talk with them (the administration), I want you to come to my office. I want to tell you some things.’ So I went to her ‘office,’ which was a slop sink, and she told me who to watch out for, what to say and what not to say and so forth, and I followed her directive. I was so impressed with this woman.  And I got the job.”

In time, Dr. Brisbane, a Medford, NY resident, would return the favor, helping Ms. Owens — an activist with a decorated track record at Stony Brook and in her home community of Gordon Heights, NY — earn her bachelor’s and master’s degrees.  They remained friends until the passing of Mrs. Owens in 2005.

Now, as she puts a bow on her own legacy at the university, Dr. Brisbane is honoring her best friend’s legacy as well.  As part of a $1 million planned gift to the university, she is establishing a fund for health and technology education for Stony Brook Medicine’s custodial staff.

“She’d want me to do this for the custodial workers,” Dr. Brisbane said. “If I had a single reason, it’s that.”

The gift follows a long and distinguished record not only of service to the university, but of financial support.  Over the course of her career, Dr. Brisbane’s donations have totaled nearly $500,000, including more than $400,000 donated through payroll deduction.

“Frances Brisbane’s career at Stony Brook exemplifies what the university stands for, from her 24 years as Dean of the School of Social Welfare to her continuing work as Vice President for Health Sciences Workforce Diversity and as Professor in the School of Social Welfare,” said University President Samuel L. Stanley Jr. “We are all honored by the generosity of her planned gift.”

For her part, Dr. Brisbane has been proud to be able to support so much at Stony Brook — recipients of her donations range from Stony Brook Athletics to the School of Dental Medicine’s Community Outreach Fund to the Staller Center for the Arts — even if, for a long time, she wasn’t fully aware of the scope of her support.

“I think that when it comes out of your paycheck and you don’t see it, you don’t miss it,” Dr. Brisbane explained in her humble manner. “When I looked at the statement and saw what I had donated, I said, ‘Where did that come from?’ I love giving, and I love being helpful, but if I had known I was giving that much, I would have said, ‘Can I afford this?’”

Clearly, in retrospect, the answer was yes.  Her donations comprise a philanthropic legacy worthy of accompanying her decorated academic record, which includes drug use prevention and recovery programs used across the United States and around the world; a unique academic conference, “Counseling and Treating People of Colour: An International Perspective,” now in its fourth decade; seven books, including volumes on substance abuse, culture competency, and working with people of African ancestry; and a President’s Call to Service Award, the highest award for volunteerism, presented by President George W. Bush in 2007.

“Frances Brisbane’s engagement means an incredible amount to this institution but the lesson her gift offers is significant as well,” said Stony Brook Foundation Chair and IMAX CEO Richard Gelfond ’76. “She embodies the Stony Brook experience and character; more importantly, she is inspired to give back and create a legacy for generations of students to have access to and cherish that same experience.”

Brisbane added that early on she “decided to ‘pool’ all my giving (except contributions to church and religious activities) to one place – Stony Brook – so it would be large enough, hopefully, to make a difference in the areas where it was most needed on campus.”

And that help, through her philanthropy and her academic work, is the most fitting tribute of all to her impact according to President Stanley.

“Although Frances has received many well-deserved accolades throughout her career,” he said, “I can pay her no greater compliment than to point with gratitude to all the lives she has changed and is changing, and to the enduring mark that she continues to make not only on Stony Brook, but on the greater community as well.”

Devon M. Daniel, Director of Development in the College of Arts and Sciences at Stony Brook University noted that Dr. Brisbane’s son Robert, her sister, Dr. Hazel Dukes, and two of Ms. Owens’ daughters, Roberta and Gwen, attended a recent check presentation for the new planned gift. He said that Ms. Owens daughters “love Dr. Brisbane and are honored that she has chosen to share her legacy with their mother’s memory.”