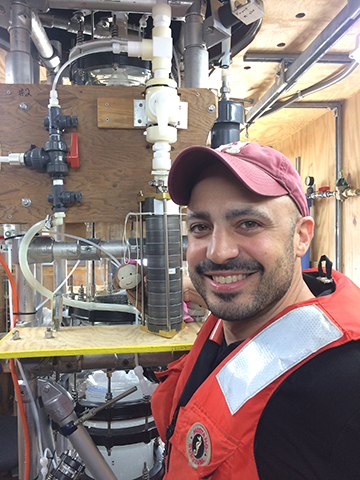 The discovery helps explain how organic matter produced by life thousands of years ago is ultimately removed from the sea.

STONY BROOK, NY, October 23, 2019 – When waves crash in the ocean, they inject tiny particles into the air (called aerosols) that carry organic molecules more than 5,000 years old. This discovery, published in Science Advances by Steven Beaupré of Stony Brook University’s School of Marine and Atmospheric Sciences (SoMAS) and a national team of scientists, helps to solve a long-standing mystery as to what finally happens to these ancient marine molecules.

Decades of measurements have revealed that nearly all of the organic matter dissolved in the oceans is surprisingly old – up to several thousand years. But scientists do not completely understand how this ancient organic matter is eventually destroyed. Beaupré and colleagues performed experiments to show that some of this ancient organic matter can be removed from seawater when wave-generated air bubbles burst on the ocean surface and inject aerosols into the atmosphere. By directly measuring the radiocarbon (14C) ages of the aerosols, they estimate that somewhere between 19 and 40 percent of the aerosol organic matter is at least 5,000 years old.

Prior experiments by Beaupré ‘s colleagues David Kieber (SUNY ESF) and Bill Keene (University of Virginia) suggested that old organic molecules might leave the ocean as stowaways aboard these tiny particles.

“Our new study shows that a significant proportion of that organic matter is indeed quite old, and that the formation of aerosols by breaking waves could be a significant removal pathway for the old carbon found in the sea,” says Beaupré, lead author and Assistant Professor.

This pool of ancient organic matter is massive, holding about as many carbon atoms in the ocean as there are in all of the vegetation on land or in all of the carbon dioxide (CO2) in the atmosphere. It is primarily created by photosynthesis and therefore represents a long-term storage reservoir for atmospheric CO2, which is a potent greenhouse gas. Therefore, it is important to understand what processes ultimately break down these ancient molecules into something that can be used again by nature.

Once in the atmosphere, these aerosolized molecules are likely to be broken down by sunlight into CO2 and other molecules that are more palatable to marine life. Accordingly, emphasizes Beaupré , this finding has implications for both oceanic and atmospheric biogeochemistry, as well as the global carbon cycle and climate.

Beaupré also says the results were somewhat surprising because it is generally believed that only the youngest organic molecules are likely to be injected into the atmosphere by breaking waves. This is because the ancient molecules should have degraded to less reactive forms during their prolonged exposure to the environment.

“Despite the effects of aging for thousands of years, our results suggest that even some of the oldest molecules in the sea can compete with the youngest to grab hold of rising bubbles and rocket into the sky,” he says.

The research team used a special aerosol generator to study this process during a month-long cruise to the North Atlantic Ocean. The device produced aerosols by closely mimicking the bubbles plumes created by breaking waves, as described in a companion paper also published online and co-authored by Beaupré in the Journal of Geophysical Research-Atmospheres.

They measured the chemical composition and radiocarbon ages of seawater flowing through the generator and of the aerosols that it produced. Combined with measurements of the particle sizes, they concluded that the aerosolized organic matter could survive for about a week in the atmosphere, where it could be carried inland by winds, chemically degraded, and/or redeposited in the ocean.

The research was funded in part by the National Science Foundation’s Chemical Oceanography program.