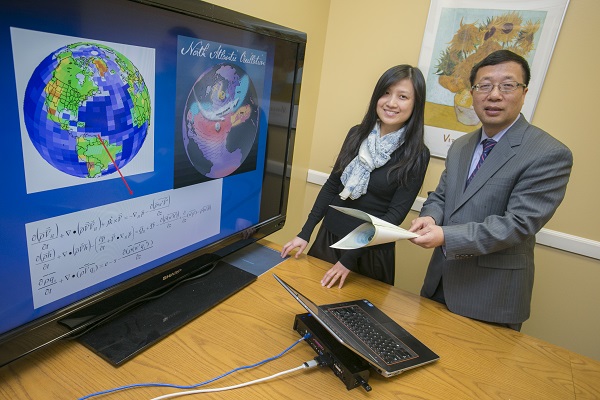 Stony Brook, NY, February 9, 2015 – An international team of scientists, including Minghua Zhang, Dean and Director of Stony Brook University’s School of Marine and Atmospheric Sciences (SoMAS), has found that man-made aerosol emissions from industrial processes have changed the relationship between temperature and precipitation in the northing tropics. The findings, published early online in
Nature Geoscience, may help to indicate the shifts in seasonal rainfall in Central America, which is critical for agriculture in the region.

The team reconstructed rainfall patterns and temperature over 450 years by analyzing the chemical composition of a stalagmite recovered from a cave in Belize in Central America. Stalagmite in the cave was formed through deposition of calcium carbonate and other minerals, which precipitated from mineralized water solutions. These water solutions contain oxygen and carbon. The team used the oxygen and carbon isotopic ratios from each layer of stalagmite deposits to recover the cumulative signals of climatic and hydrogeological variations over the past 450 years that include rainfall and temperature. Because of the unique seasonal variation of precipitation in Belize, the researchers were able to accurately date the layers of deposits.

“We found an unexpected relationship between temperature and rainfall in the northern tropics with a systemic trend of decreasing rainfall,” said Professor Zhang. “This corroborated with what the entire research team found over a much longer period of time based on the cave data.”

Lead author, Dr. Harriet Ridley, from the Department of Earth Sciences at Durham University in the United Kingdom, which led the study, added “The research presents strong evidence that industrial sulphate emissions have shifted this important rainfall belt, particularly over the last 100 years.”

In the paper, titled “Aerosol forcing of the position of the intertropical convergence zone since AD 1550,” the researchers also identified a substantial drying trend from 1850 onwards, coinciding with a steady rise in sulphate aerosols building in the atmosphere as a result of burning fossil fuels during the European and American Industrial Revolution.

Professor Zhang explained that sulphate aerosols from emissions moderated temperatures in the Northern Hemisphere by reflecting the Sun’s radiation. This resulted in the Intertropical Convergence Zone – a tropical rainfall belt near the equator – to be shifted toward the warmer Southern Hemisphere, which leads to drier conditions in the northern tropics.