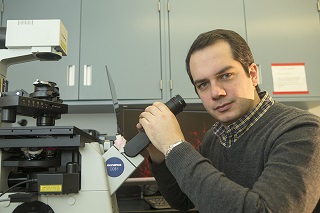 Study in Nature May Lead to New Therapies for PTSD, Phobias and Anxieties

STONY BROOK, N.Y., January 20, 2015 − Our existence depends on a bit of evolutionary genius aptly nicknamed “fight or flight.”  But where in our brain does the alarm first go off, and what other parts of the brain are mobilized to express fear and remember to avoid danger in the future?

These are questions that a team of scientists led by Associate Professor Bo Li and post doctorate fellow Mario Penzo at Cold Spring Harbor Laboratory (CSHL), and Stony Brook University’s Jason Tucciarone have begun to answer in a paper to be published January 19 in Nature, titled “The paraventricular thalamus controls a central amygdala fear circuit.” Using mouse models, the researchers have identified a novel life-preserving circuit that is responsible for recognizing and remembering threats, as well as activating the brain to respond to danger.

“This research enriches our understanding of brain anatomy and normal functioning in fear memory,” says co-author Jason Tucciarone, an MD/PhD student in Stony Brook’s Medical Scientist Training Program (MSTP) and the Department of Neurobiology and Behavior. “It also may provide clues to faulty processing of threats that can lead to anxiety, phobias and, perhaps, post-traumatic stress disorder.”

The research team looked first at the thalamus, the part of the brain known as the “switchboard.”  In particular, they focused on the paraventricular nucleus of the thalamus (PVT), “an area that is readily activated by both physical and psychological stressors,” according to the authors.

As part of their experiment, the researchers used mild foot shocks to simulate danger. They also genetically altered mice to study the role specific parts of the circuit play in protecting the mice from “danger.”

First, they confirmed that the PVT was indeed highly sensitive to threats. They then looked at the neurons in the posterior PVT (pPVT) that were communicating with the lateral division of the central amygdala (CeL), where neuroscientists say is a site of fear memories.

Through a series of experiments that suppressed communications coming from these neurons, they found that the pPVT plays an important role in conditioning the mice to fear certain situations and to remember those fears. They also demonstrated that this knowledge was “hard wired” into the neuronal synapses.

But what chemical messenger do the pPVT neurons send off to deliver this information to their cousins in the CeL? The researchers hypothesized that the messenger might be brain-derived neurotrophic factor (BDNF), a protein known to regulate synaptic functions.

To test this hypothesis, the researchers created mice without the gene to produce BDNF or without a BDNF receptor. Both kinds of mice exhibited an impaired ability to recognize danger, even after being conditioned to do so. The researchers also tested the effect of BDNF on mice that had not been genetically altered by infusing their brains with BDNF, causing a “robust” response to danger.

The communications transmitted by BDNF produced in pPVT neurons and picked up by CeL receptors, the researchers concluded, “facilitate not only the formation of stable fear memories but also the expression of fear responses.”

This research was supported by grants from National Institutes of Health, the Dana Foundation, the National Alliance for Research in Schizophrenia and Affective Disorders, the Louis Feil Trust, the Stanley Family Foundation, and a Harvey L. Karp 27 Discovery Award.