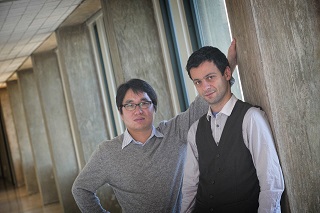 STONY BROOK, N.Y., October 21, 2014 – Scientific inquiry is a hit and miss proposition, subject to constant checking and rechecking. Recently, a new class of materials was discovered called topological insulators—nonmetallic materials with a metallic surface capable of conducting electrons. The effect, based on relativity theory, exists only in special materials—those with heavy elements—and has the potential to revolutionize electronics.

Swiss scientists later predicted that a reconstructed boron surface would display a similar behavior—although unlike topological insulators it is a light element, and its surface metallics would be caused by surface atom rearrangement. The effect could also have nanoelectronic applications.

But Xiang-Feng Zhou and his colleagues have found that these predictions are incorrect. Their paper, Unexpected Reconstruction of the α-Boron (111) Surface, is published online in
Physical Review Letters, a peer-reviewed journal of the American Physical Society that is ranked first among physics and mathematics journals by Google Scholar.

Zhou is conducting postdoctoral research in the Stony Brook University laboratory of Artem R. Oganov, Professor of Theoretical Crystallography in the Department of Geosciences (Zhou is also an Associate Professor of Physics at Nankai University in Tianjin, China). What struck his interest in the hypothesis for the reconstructed boron surface was that it seemed to conflict with the principle that reconstructions usually lower their energies by atomic rearrangement, leading to a semiconducting (as opposed to metallic) surface state—that is, something in-between that of a conductor and that of an insulator. “Such an unexpected metallic reconstruction encouraged us to explore it and other likely reconstructions and their stabilization mechanisms,” Zhou says.

The team utilized the structure prediction code USPEX (Universal Structure Predictor: Evolutionary Xrystallography) developed by Oganov and his students. USPEX weds a powerful, global optimization algorithm with quantum mechanics and is used by more than 1900 scientists worldwide. “The calculations involved our specifically developed evolutionary algorithm and quantum-mechanical calculations based on density functional theory,” Oganov says. “These methods and techniques are at the heart of computational materials science.”

The USPEX simulations of the structurally complex boron surface—representing the first realistic model for a surface reconstruction of boron crystals—showed that “the reconstruction displays much lower energy than the earlier reported structures,” Zhou says. “This confirms that the classical electron counting rule [ECR]—for explaining or predicting electronic structure and bonding—governs the reconstruction. The alpha-boron [111] surface is semiconducting, just like the bulk of the crystal, and has a structure similar to other phases of boron and gamma-boron—also discovered by Oganov and colleagues—and the T-52 phase of boron.”

He adds that, “This might provide a roadmap for synthesizing such phases on the surface of alpha-boron. Even though our calculations refute the original suggestion of metallic surface properties, new opportunities may be equally exciting.”

Oganov amplifies. “Our study has clarified the hitherto mysterious surface chemistry of boron,” he says. “One implication, of course, is that for boron there will be no behavior similar to topological insulators, contrary to earlier predictions. But our findings may be important for photocatalytic water splitting, for which boron is considered to be a promising material.”

Photocatalytic water splitting is an artificial photosynthesis process used for the separation of water into hydrogen and oxygen. It may enable production of renewable hydrogen from water on a large scale to produce hydrogen fuel, which burns cleanly and can be used in a fuel cell. “Boron absorbs part of visible light, and its energy is used to excite the electrons,” Oganov says. “In this excited electronic state, the boron surface helps split the water molecules.”

Dr. Zhou was the paper’s lead author; co-authors assisted with discussion, scientific techniques, technical help, and writing the paper. Zhu is a materials scientist and Oganov is a theoretical crystallographer; most of the authors are physicists. The work was supported by the U.S. National Science Foundation, Defense Advanced Research Projects Agency (DARPA), and Department of Energy; the National Science Foundation of China and other Chinese governmental programs; and the Ministry of Education and Science of the Russian Federation and that country’s Foreign Talents Introduction and Academic Exchange Program.

The work, Oganov says, would have been impossible without USPEX. The calculations were performed on the Extreme Science and Engineering Discovery Environment (XSEDE)—which supports 16 supercomputers and high-end visualization and data analysis resources across the United States—and on the computing cluster of the Center for Functional Nanomaterials at the Brookhaven National Laboratory.

USPEX will next power further scientific queries. “As scientists, having witnessed the success of the USPEX method, we want to systematically explore surface chemistry and physics,” Oganov says. “This is a critically important yet rather poorly known field of materials science.”

Oganov says that it is extremely difficult to solve surface structures and explore surface phase diagrams experimentally. “We have proven that USPEX can do it reliably and rather easily. Our USPEX method and code is the most widely used tool—and arguably the most powerful—in the field of computational materials discovery today.”