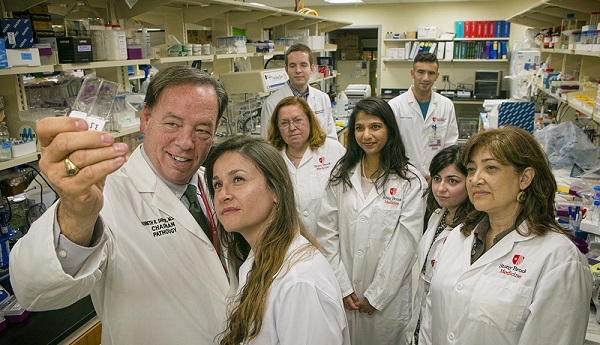 Stony Brook, NY, September 1, 2015 – Keratin 17 (K17), a protein previously believed to provide only mechanical support for cancer cells, appears to play a crucial role in degrading a key tumor suppressor protein in cancer cells named p27. This finding, published in the September 1 issue of
Cancer Research
, is based on the work of researchers in the Department of Pathology at Stony Brook University School of Medicine. They found that K17 has the ability to enter the nucleus of cancer cells, leading to the degradation of p27. The work illustrates for the first time that a keratin can function to promote the development of cancer. Furthermore, the paper details that tumors with high levels of K17 are biologically more aggressive and have a worse prognosis than low K17 tumors.

The protein p27 is a master regulator of organized cell division and growth found in the nucleus of cells, and it is commonly inactivated in cancer cells. In the paper, “Keratin-17 Promotes p27K1P1 Nuclear Export and Degradation and Offers Potential Prognostic Utility,” lead author Luisa Escobar-Hoyos, a Molecular Pharmacology graduate student working on her PhD thesis project under the direction of Kenneth Shroyer, MD, PhD, Professor and Chair of the Department of Pathology, and colleagues, investigated if K17 interferes with p27 processes.

Their findings validate previous observations from the Shroyer lab that reveal high K17 cervical cancers patients have a decreased chance of long-term survival when compared to patients that express little to no K17 in tumor tissue. In addition, it was discovered that K17 increases chemotherapy resistance in cancer cells.

This research suggests that K17 testing could provide valuable information that may be used to distinguish between “clinically identical” cancer patients, identifying cases with more aggressive tumors at the time of diagnosis, and potentially guiding personalized treatment based on individual K17 status.

“These findings explain to a certain extent why cancer patients without K17 expression have twice the chance of surviving from this disease compared to patients who express K17,” said Dr. Shroyer. “However, it is likely that K17 may also play other important roles in cancer that extend far beyond its interaction with p27.”

He added that discovering the “tags” of K17 that mediated its entry and exit into the cell nucleus and the binding sites between K17 and p27 could provide further insight with additional research into how K17 could potentially be treated using novel pharmacologic agents for targeted cancer therapy.

Co-authors of the paper include undergraduate (R. Shah), graduate (A. Banach) and medical (N. Najafian, E. Nielsen, R. Al-Khalil) students from Stony Brook University. In addition, researchers from the Departments of Pathology, Pharmacological Sciences and Biomedical Informatics (L. Roa, E. Vanner and D. Talmage) from Stony Brook University and a collaborator at the University of Massachusetts Memorial Cancer Center (A. Akalin).