Kidney Transplant Patient Beats the Odds and the Storm 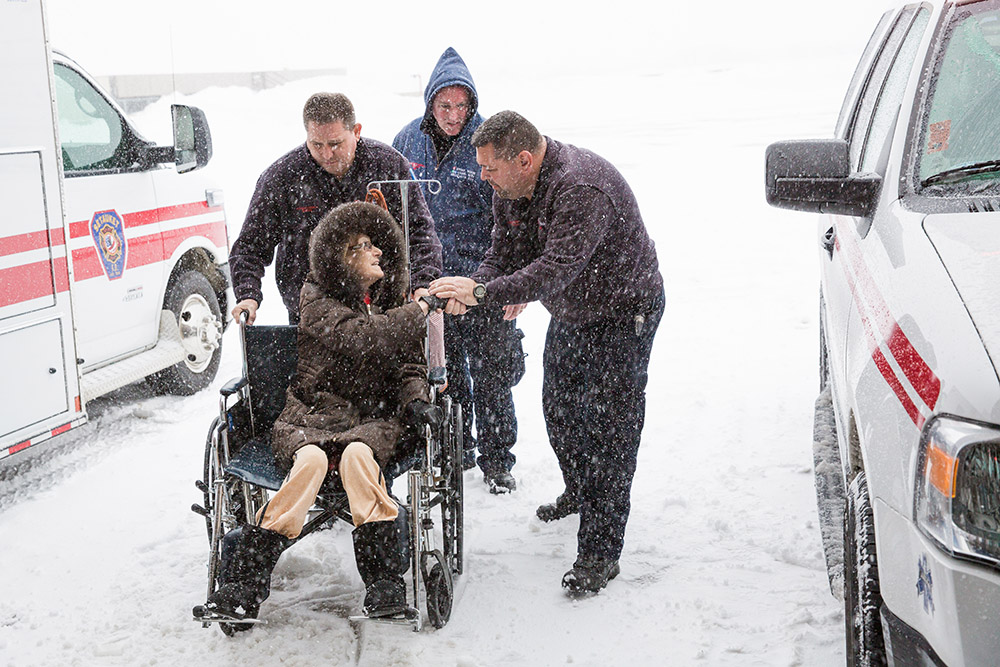 January 27, 2016 – A powerful nor’easter pummeled Long Island on Saturday, January 23rd, which forced emergency travel bans, created flooding in some areas and buried the region with nearly 30 inches of snow. But it didn’t stop Stony Brook University Hospital’s Transplant Kidney Team and Paramedics from getting Melanie Chirichella to the operating room once a kidney was identified at the peak of winter storm Jonas.

Friday evening, the Stony Brook University Hospital Department of Transplant received a called that a kidney was coming their way from South Carolina. After testing, the kidney matched to Chirichella, a grandmother of three from Bohemia, N.Y. The storm wasn’t the only reason the odds were against Chirichella; New York has one of the lowest organ donation registration rates in the U.S., said Dawn Francisquini, senior transplant specialist at Stony Brook University Hospital told Newsday.

Chirichella had been waiting for a kidney for nearly a year and a half when she got the call that Saturday morning.

“It was like a miracle, it really was,” the 64-year-old told the Associated Press during an interview in her hospital room as she recovered on Tuesday morning. “Normally you get a call from a nurse saying “how you’re doing… Oh I’m doing alright [she would respond] but I need my kidney” and then when she called saying “we have a kidney for you,” I almost fell off the bed.”

But there was a problem: A blizzard was raging up and down the East Coast. Ill and frail, Chirichella told the caller that she was unable to get to the hospital for the transplant that she’d been waiting for.

It was then that Dr. Frank Darras, Medical Director of the Stony Brook Medicine Transplantation Services called the Emergency Medical Services department to ask for assistance.

Pete Amato, a Stony Brook Paramedic who regularly works as a flight paramedic happened to be grounded that day because of the blizzard. Amato heard the request and jumped into action. He knew there wouldn’t be time to wait. A decade ago, his brother had received a lifesaving kidney transplant. He hopped behind the wheel of a hospital SUV—and drove the almost 20 miles in the blizzard to the patient’s home.

On Nicolls Road, where the hospital is located, “I was almost run off the road by a tractor trailer that was sliding,” Amato told Newsday reporter Joan Gralla. “There were accidents, cars run off the road, I had to maneuver around,” he said.

As he pulled up to Chirichella’s home, he realized the snow had not been shoveled and she would need her walkway cleared to make it to the transport vehicle. He backed up as far as he could with the SUV and then made his way through the 2 feet of snow to reach her door. After proclaiming “congratulations” to Chirichella, he asked where a shovel might be and starting shoveling her walkway.

“The roads were really bad, but I was on a mission,” said Amato, “I just wanted to get her back safely. I didn’t want to get stuck in the snow with her and have them not be able to use the kidney… we could have been stuck for hours.”

Ideally, doctors try to transplant a kidney within 24 hours of its removal, but that can be extended to 48 hours under the right conditions.

Chirichella made it to the hospital safely and was immediately put on dialysis that afternoon.

In the meantime, LiveOn NY (formally the New York Organ Donor Network) was braving the blizzard and transporting the kidney to Stony Brook.

Wilson Li, an organ preservationist at LiveOn, was given the job of delivering both kidneys with the help of a driver from the medical transportation company TransCare.

First stop was Presbyterian Hospital, perched high on a ridge in Manhattan overlooking the Hudson River. The SUV carrying the team got stuck trying to get up the hill and had to be pushed to the top by a city sanitation vehicle, Li told the Associated Press.

After the delivery, they ditched the SUV and waited 45 minutes for an ambulance for the 60-mile drive out to Long Island.

A lot of ice, too. They stopped every 15 to 20 minutes to de-ice the windshield because the wipers couldn’t keep up. But they kept going, delivering the kidney to Stony Brook at 4:12 p.m.

Dr. Darras finished the 3 ½ hour transplant surgery around 10:30pm. He said that his patient, Chirichella, whose original kidneys were damaged by diabetes and had to receive dialysis three days a week for the 18 months she waited on the transplant list, is recovering well.

Chirichella said the entire experience was “a miracle” and that this transplant means she can now get back to living her life without being so restrictive.

“Obviously, it was a miracle,” said daughter Dawn Chirichella, 40, of Holbrook told Newsday. “I think it’s really giving my Mom a second chance at life and we are just so grateful, obviously, to the donor and their family.”