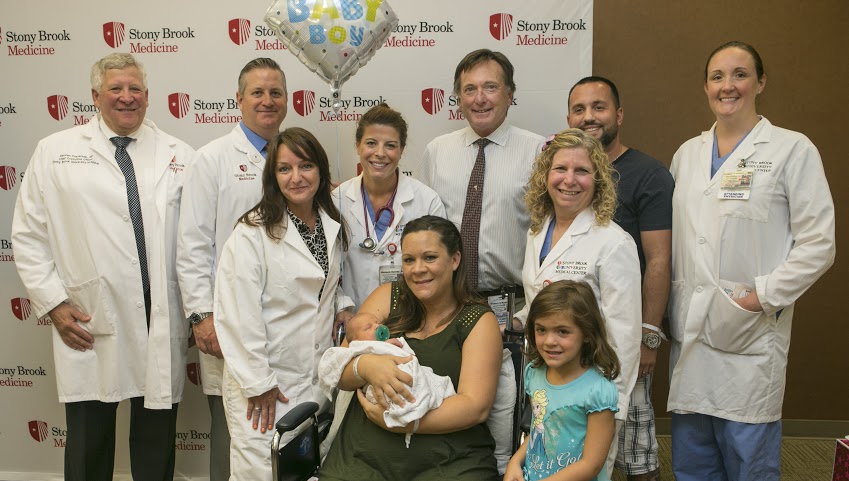 On August 20, 2015, Stony Brook University Hospital celebrated the 100,000th birth since the hospital’s Labor & Delivery program began in May 1980. Luca Michael Picarella, born at 8:09 am on August 17 weighing 8lbs., 9 oz., and 20 ¾ inches in length, was feted along with his parents Katie and Mike Picarella, and big sister Gianna (5) who was also born at Stony Brook. He was also presented with scholarships and other gifts inspired by community residents who caught wind of the delivery countdown — either from Stony Brook announcements, social media, or local news — and reached out to Stony Brook to volunteer their gifts of support. The event also featured a surprise visit from Jeffrey Solomon, 35, who was born during the very first delivery at Stony Brook University Hospital, on May 28, 1980.

At the celebration, Dr. Reuven Pasternak, Chief Executive Officer of Stony Brook University Hospital and Dr. Todd Griffin, Chair of the Department of Obstetrics, Gynecology & Reproductive Medicine at Stony Brook Medicine, spoke about what 100,000 deliveries means for the hospital.

“The significance of reaching this milestone goes far beyond just counting the number of deliveries of deliveries since 1980,” said Dr. Pasternak. “While residents of Suffolk County have many options of where to deliver their children, this milestone reflects the many who selected Stony Brook — which includes many who work here.”

Dr. Pasternak announced generous scholarships for baby Luca, which included $10,000 from Island Federal Credit Union; and a $2,500 scholarship towards tuition at the North Shore Montessori School located in Stony Brook. Bret Sears, President and CEO of Island Federal Credit Union, and North Shore Montessori School Board of Trustees members, Boris Matvenko, JD and Leslie Hosch, presented the scholarships at private meetings with the Picarella family before the event.

Dr. Pasternak then unveiled a huge basket of gifts for the Picarella family and listed the contents:

Gianna was presented with a special big sister present: Stony Brook gear, a Wolfie doll and an American Girl doll.

Dr. Griffin welcomed the Picarella family and the attending OB/GYN who delivered baby Luca, Julie Welischar, MD, and noted that both he and Dr. Welischar are Stony Brook alums.

“We are so proud to have reached the 100,000 delivery milestone!” said Dr. Griffin. “Each delivery represents the dedicated, expert work of our doctors, nurses, and the rest of our hospital medical staff and employees. I delivered my own three children here and my wife and I wouldn’t think of going anywhere else — we know first-hand what a terrific place it is, with expert clinicians and services able and ready to handle every delivery situation. Congratulations to everyone here at Stony Brook!”

Dad Mike Picarella spoke about how grateful he and Katie are for all the care and support his family received at Stony Brook University Hospital, and joked that when he heard about the 100,000th delivery countdown a few weeks ago, he never thought their birth would be it. “If it were me being born, with my luck, I would have been number 99,999 or 100,001. So the fact that our birth was actually the 100,000 was amazing, and we so appreciate the scholarships and gifts. It’s been amazing.”

Mom Katie Picarella then thanked all the doctors and nurses involved in their care. “Everyone’s been wonderful and thank you so much for everything. We are so blessed.”

Dr. Griffin then introduced the special guest. Jeffrey Solomon came to the podium and said, “Back in May 28, 1980, I was the first baby everdelivered at Stony Brook.” Audience members cheered and then burst into laughter when he noted while he doesn’t recall his birth, he heard many stories of it from his parents. He held up a laminated, worn copy of a Newsday article from 1980 about his birth.

“I brought this many times to show-and-tell at school as a young child, just as I’m doing now.”

He noted that his mother sadly passed away in 2007 after a struggle of nearly two decades with multiple sclerosis, and thanked his father, Bob Solomon and step-mother, Hope Solomon, for traveling with him from Florida to attend the celebration.

Dr. Pasternak noted that given the steadily increasing number of deliveries each year at Stony Brook, “We could reach 200,000 by 2040, just over half the time it took to reach 100,000!”

Each birth (or delivery) represents the live childbirth of one pregnant woman, so the 100,000 birth milestone represents many more than 100,000 babies born to families throughout Suffolk County and beyond — as one childbirth could result in a single baby or multiples. Today, nearly 4,000 babies are born each year at Stony Brook University Hospital — the result of 10-20 deliveries each day at Stony Brook. For more information including videos and more photos, please click stonybrookmedicine.edu/100000.