Where Creativity Lives On 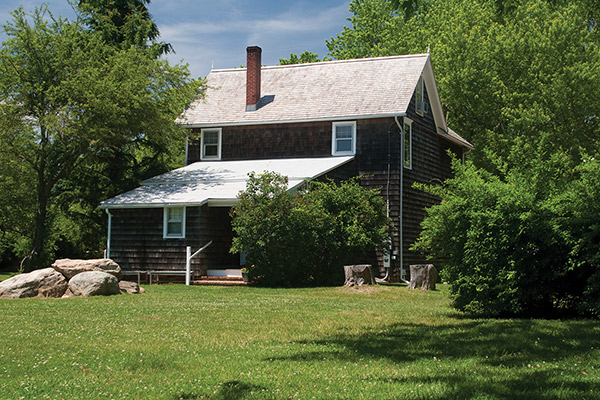 When Jackson Pollock and Lee Krasner — two of the greatest American artists of the 20th century — moved to the hamlet of Springs in East Hampton in 1945, they unknowingly changed the course of contemporary art history.

Their motivations for moving to the small, then-working-class area were simple. They were struggling financially and needed a place to live that was more affordable than Manhattan. Additionally, Krasner recognized that Pollock, struggling with alcoholism and depression, would benefit from being away from the pressures of the New York art world. Pollock’s art dealer, Peggy Guggenheim, agreed to lend the newlyweds $2,000 for the down payment on a house under the condition that she would own everything Pollock created for the next two years — a wise investment on her part since Pollock’s career was about to ascend exponentially.

The serenity and brilliant light of the setting, along with the open space they found in Springs, was transformational for both artists, with Pollock discovering his landmark “drip” style of painting here and Krasner exploring not only the abstract expressionism she was trained in, but other more organic, colorful and collage-based styles.

After Pollock died tragically in 1956, Krasner divided her time between Manhattan and Springs. Later in her life, she began to contemplate what should become of the house and studio after her death. She knew she wanted to give her money to create a foundation for artists with recognizable merit and need (since its inception, The Pollock-Krasner Foundation has awarded more than 4,100 grants, totaling over $65 million, to artists in 77 countries). But she wanted the house and studio to be a place where people could study the work of the artists and experience the space in which they created it.

Today, under the stewardship of the Stony Brook Foundation, they do just that. The Pollock-Krasner House and Study Center came to Stony Brook thanks to a series of meetings in 1983 between Krasner; Terence Netter, a dear friend of Krasner’s and the first director of the Staller Center for the Arts; and then University President John Marburger III. Over dinner one night, Krasner asked Netter if he thought Stony Brook would be interested in having the house. Netter immediately scheduled a meeting with President Marburger. There was no question: Recognizing the historical and cultural value of this property as the greatest individual site associated with abstract expressionism, Marburger wanted the house for Stony Brook.

Krasner died in 1984, and the property was officially deeded to the Stony Brook Foundation in 1987; it opened to the public in 1988. As work began to prepare the house as a public site, it was discovered that Masonite floorboards had been put down in the studio in 1953 to help winterize the structure. When the original wood flooring was revealed, so too were the drips, pours and slashes that had reached beyond the canvases of some of Pollock’s most famous paintings, including “Autumn Rhythm” (Metropolitan Museum of Art) and “Lavender Mist” (National Gallery, Washington, D.C.). Because the original floor had not been exposed to light for over 30 years, the colors of Pollock’s paint were found to be just as vibrant as the day they hit the ground. Stony Brook President Samuel L. Stanley Jr. calls this floor “an accidental masterpiece.”

A living environment where nothing is roped off, the House and Study Center welcomes approximately 8,000 visitors per year to experience the house just as Krasner kept it, the light and setting that inspired her and Pollock, and the studio and floor where the landmark work was created. As Helen Harrison, director of the site, says, “When people come here, they gain a deeper appreciation for the artists’ work because they can see exactly where it was created — the space, the setting — they can feel the creative energy still.”

Tapping into that energy is an integral part of furthering the University’s mission to establish Stony Brook as a preeminent center for the study of abstract expressionism, and philanthropy plays a critical role. In 2015, Katy Siegel was appointed the Eugene V. and Clare E. Thaw Endowed Chair in Modern American Art, and working closely with Harrison, she sees an incredible opportunity to continue broadening the relationship between the Pollock-Krasner House and Study Center and Stony Brook’s Department of Art.

Recent endowment gifts by the Eugene V. and Clare E. Thaw Charitable Trust, the Pollock- Krasner Foundation and a long list of generous supporters, along with a matching gift from the Simons Foundation, have secured the legacy of Jackson Pollock and Lee Krasner. “It’s an incredibly exciting time,” Siegel says. “The support for the house shows the depth of commitment from the department, University and donors to research on abstract expressionism and the postwar period.” She adds, “With the house, we have not only a genuine resource for scholarly research but a very tangible, thriving piece of history.”

The Pollock-Krasner House is open May–October on Thursdays, Fridays and Saturdays. Reservations are required for guided tours in May, September and October. The Study Center is open to students, researchers and the general public by appointment. Please call 631-324-4929 for more information.

Anita Olan is a Los Angeles-based writer who works with such brands as Netflix, HBO, Showtime and AMC.