The Case For Stony Brook 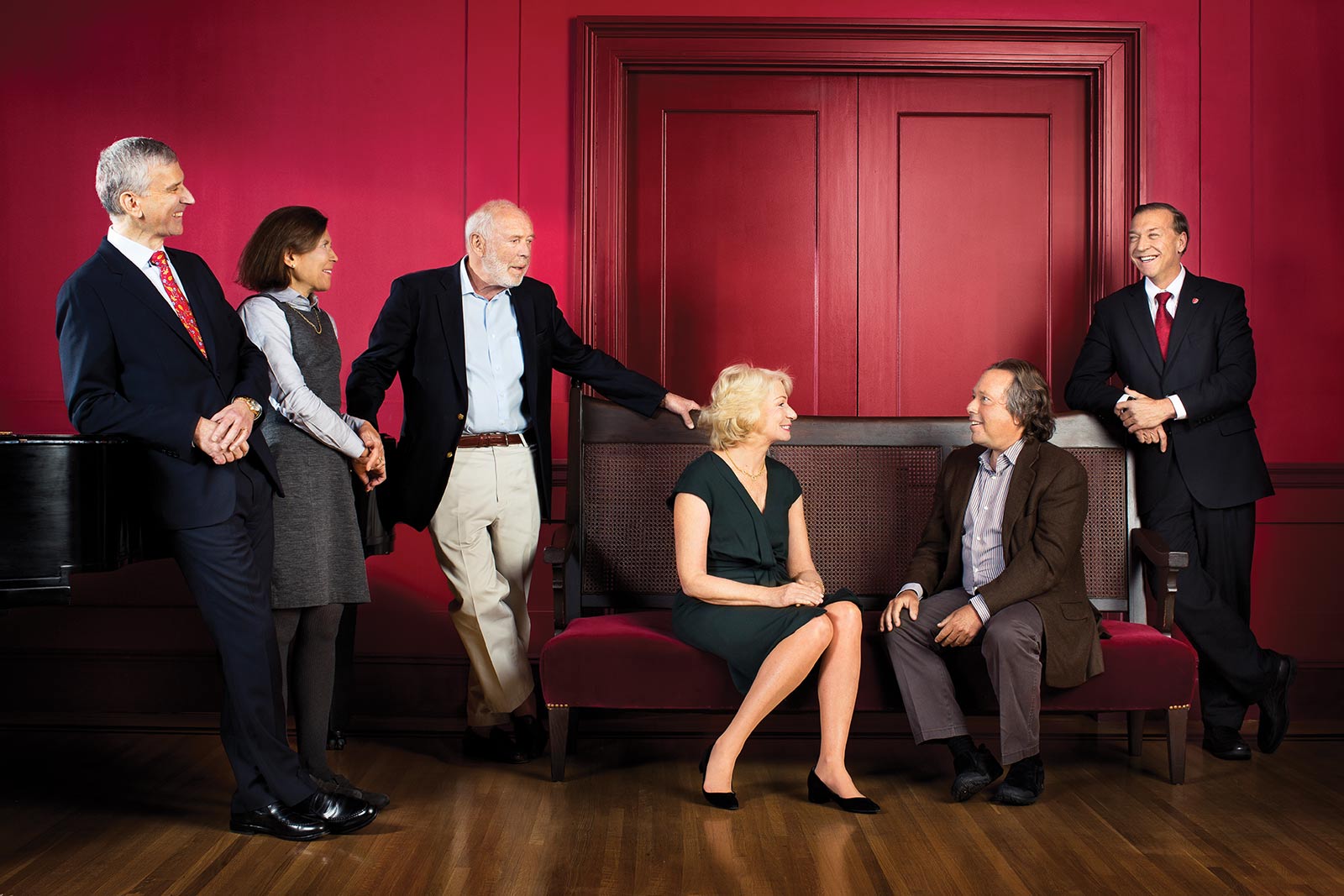 While they each had their own path to Stony Brook — whether as a student, professor or member of the community — they are united in a passion for seeing it excel as a world-class research university. Recently, several of The Campaign for Stony Brook co-chairs gathered with President Stanley to discuss why Stony Brook, why now?

Richard L. Gelfond ’76, Hon. ’04 was a typical Stony Brook student in the 1970s. Growing up lower middle class on Long Island, he applied to only three colleges and landed at Stony Brook. “It really opened my horizons,” said Gelfond, now the CEO of IMAX Corp.

That’s why he’s a major supporter of the University — he wants other students from backgrounds like his to have a stellar education they can afford. As he became more involved in philanthropy for the University, he realized he could help vault the school from a highly regarded public institution to one that could be counted among the top 20 public institutions in the country.

Gelfond made his comments at a luncheon with other Campaign co-chairs, including James H. Simons, PhD, Hon. ’92 and Marilyn H. Simons ‘74, PhD, ‘84, Hon. ‘08; and Cary F. Staller, Esq., and Marisela H. Staller. Gelfond, James Simons and Cary Staller are also Stony Brook Foundation Trustees. Joined by President Samuel L. Stanley Jr., the conversation was wide-ranging, from the school’s strengths and challenges to what the University can achieve once the Campaign meets its goal.

James and Marilyn Simons, who donated the anchor $150 million for the Campaign in 2011, echoed Gelfond. For both of them, they said, coming to Stony Brook, as chair of the Department of Mathematics and student, respectively, changed their lives. Their philanthropic priorities at the University have ranged from scientific and math research to the undergraduate experience and reinvigorating sports on campus.

‘We have and are creating a community that is incredibly rich in intellectual capital,’ said James Simons. The Campaign co-chairs agreed that building on this advantage will help Stony Brook simultaneously play a larger role in regional innovation and secure its place as a top destination for research.

For Marilyn Simons, who received both her undergraduate degree and an economics PhD from Stony Brook, the school’s promise is opportunity. In addition to financial support, she donates her time as chair of the Stony Brook Women’s Leadership Council, which pairs female philanthropists with young women on campus. “The students here are so inspiring. My involvement continues to be very personally rewarding,” she said.

Cary and Marisela Staller represent the extended Staller family’s three decades of giving to the school, including the University’s first ever $1 million gift in 1988 to establish the Staller Center for the Arts on campus. For the Stallers, it’s important for the community and the state to continue the tradition of supporting what Cary Staller calls “the pre-eminent institution on Long Island.”

Philanthropy works in two ways: to address discrepancies and to help the school advance. Stony Brook has grown in reputation, and it is now a favored choice for undergraduates. With grades and SAT scores on the rise, 34,000 applicants applied this year for 2,800 spots in the first-year class. And like most of today’s students, they’ll live on campus in some of the school’s 10,000 residence hall and apartment spaces. As the University has become more competitive, its outcomes have improved, Marisela Staller noted: “This has become a community where top faculty and researchers want to live, and their presence in turn attracts outstanding students. It’s changed the whole area.”

Added James Simons: “We have and are creating a community that is incredibly rich in intellectual capital.” The group agreed that building on this advantage will help Stony Brook simultaneously play a larger role in regional innovation and secure its place as a top destination for research.

“The University can and will do more to attract companies to Long Island and to spur local entrepreneurs — as well as students and professors — to start businesses nearby,” said Cary Staller. Tying enterprises closely to the University through shared research facilities and personnel means those businesses are stickier and less likely to move: “We need to build on that,” he said.

Another way Stony Brook sets itself apart, suggested James Simons, is through high-profile collaborations, such as Stony Brook’s contribution to the BRAIN Initiative, a national program to decipher how the human brain works. Lorna Role, professor and chair of the Department of Neurobiology and Behavior, is spearheading an initiative to design a brain-implant chip, working with colleagues at other SUNY locations, as well as other institutions like Cold Spring Harbor Laboratory.

The University also seeks to strengthen and expand many of its academic and research centers of excellence, such as Turkana Basin Institute founded by world-renowned paleoanthropologist Richard Leakey. It’s this sort of “intellectual entrepreneurship” that Gelfond sees as a major element of how Stony Brook excels, unlike other universities.

For Glenn R. Dubin ’78, Hon. ’12, Athletics at Stony Brook also represents an incredible opportunity to raise public recognition of the University. Dubin, along with his wife, Eva Andersson-Dubin, MD, recently established a $5 million matching challenge for a new indoor training center. Reached by phone, Dubin said, “When you look at the top public elites like the University of Michigan and the University of Virginia, their outstanding academics go hand in hand with strong athletic departments. There is no reason we can’t be among that company.” Dubin himself played football when he was an undergraduate at Stony Brook, but it wasn’t until he returned to campus for a thrilling game against Brown 30 years later that he realized how he wanted to give back. “Each alum,” he said, “has different memories and motivations for giving. For me, it is Athletics, but for others, their areas of interest are based on personal experiences, and that’s important to recognize.”

There are a handful of public universities that are considered among the best schools in the country. But funds from state budgets are often insufficient for tier-one universities.

That’s where philanthropy fits in, said Gelfond. Donors and alumni — the University’s strongest proponents — can help close the gap between what the state funds and what Stony Brook needs to achieve its bold ambition.

As President Stanley pointed out, “Philanthropy is the margin of excellence. It enables the University to make timely and strategic investments to advance our mission. So we need funding for merit scholarships to compete for the most talented students and endowed chairs and professorships to attract and retain the best faculty.” James Simons agreed, noting that mathematician Sir Simon Donaldson, winner of the Fields Medal and the Breakthrough Prize for his work, is now a Stony Brook professor at the Simons Center for Geometry and Physics.

There’s no reason why philanthropy can’t be leveraged more often to enhance Stony Brook’s national and international impact, Gelfond told the table of fellow co-chairs. “I’d love to live in a world, in my lifetime, where when we say we’re from Stony Brook, everyone knows there is no public university in the country that’s more highly respected.” stonybrook.edu/campaign

Chana Schoenberger is a New York-based business writer whose work has appeared in The Wall Street Journal, Bloomberg Business and BBC Capital.