There’s no denying that as the Earth is getting warmer, our weather patterns are shifting, wreaking havoc the world over. Stony Brook University researchers are at the forefront of the search for solutions to the challenges presented by climate change, from protecting the coasts from the ravages of storm surges to anticipating the social changes brought about by drought to predicting which species might be threatened with extinction.

Edmund Chang, a professor in the School of Marine and Atmospheric Sciences (SoMAS), studies midlatitude cyclones, those huge comma-shaped storms that hammer the East Coast. They form when warm tropical air meets cold air from the polar region. While Southern Hemisphere storms will likely become more intense in the future, the outlook for the Northern Hemisphere is less clear, according to Chang. The storms may be reduced in intensity because the northern polar regions are warming, reducing the temperature difference that gives these storms their power.

“But because of that temperature increase, there’s more moisture in the atmosphere,” Chang said. “We can expect heavier rain and more flooding events.”

“We also may experience more extreme heat. With fewer storms there will be less cloud cover and natural protection from the sun’s rays, and high-temperature and duration records may topple”, Chang said.

He is one of four Stony Brook professors who shared the 2007 Nobel Peace Prize with former Vice President Al Gore for their work on climate change. He is now working on improving long-range forecasting. Predictions are difficult and subject to change because the atmosphere is chaotic, Chang said. He is testing prediction models using data gathered by the joint U.S.-Canada North American Multi-Model Ensemble, a seasonal forecasting system. He expects the large sample will filter out some of the atmospheric “noise,” which will help push the window of accuracy from the current standard of about 10 days to a month or more. That can give governments and industries — especially utilities, transportation and agriculture — more time to prepare.

Bowman’s vision for New York consists of two barriers — one that would extend five miles from Sandy Hook, New Jersey, to Far Rockaway, New York, and the other across the upper East River. Bowman said the ideal height is 30 feet “to provide ultimate protection against a 1,000-year storm.” Floodgates would remain open to accommodate shipping traffic and normal tides, closing only during storm surges. The project faces many environmental obstacles plus a price tag of up to $25 billion.

“It’s expensive,” Bowman said, “but if you compare it to the damage that Sandy created — $80 billion — it puts it in perspective.”

Collaboration Is the Mother of Invention

While climate scientists can predict long-range changes in weather patterns, forecasting the social impacts of weather is harder because human behavior is less predictable. But that’s just what Oleg Smirnov, an associate professor of political science, wanted to do.

Smirnov — along with SoMAS professor Minghua Zhang, who shared the 2007 Nobel Peace Prize — created drought predictions on climate models that explored various scenarios, such as what would happen if greenhouse gas emissions are low to possible outcomes if emissions continued unabated. The researchers found that by the end of this century, the number of people exposed to extreme drought will increase by more than 400 percent under the high-emissions scenario.

More surprising: While policymakers usually focus on stemming population growth as a solution to water scarcity, the research by Smirnov and Zhang showed that only 9 percent of the increase can be attributed to population surges and that climate change alone is responsible for nearly 60 percent.

“Under the high-emissions scenario, we observe very substantial changes in social outcomes — the number of people who are affected and may have to migrate, for example,” Smirnov said. “To ordinary people, a 3-degree Celsius rise in temperature might not seem like much, but to the millions of people who are affected by the resulting climate change, that will be a serious problem.”

Of course, it’s not just humans and our property that are at stake. Entire species are threatened by the effects of climate change.

The International Union for Conservation of Nature (IUCN) and other organizations have established guidelines to identify threatened species and rate them, from vulnerable to endangered to critically endangered to extinct. H. Resit Akçakaya, a professor in the Department of Ecology and Evolution, wanted to know if the criteria for the Red List of Threatened Species, the IUCN’s global inventory of biological species, would be effective in predicting the effects of climate change.

“The system we use was developed in the 1990s, when we didn’t know very much about climate change,” said Akçakaya, who chairs the IUCN Red List Standards and Petitions Subcommittee.

By running computer simulations using different types of models that predict habitat changes and variations in species’ populations and climate, Akçakaya and collaborators from Europe and Australia confirmed an elevated risk of extinctions under climate change scenarios. They found that the risk for a species could be predicted from available information, verifying the efficacy of the Red List and other systems like it. They were also able to calculate how quickly conservation action must be taken.

“Although the time between identifying that the species is at risk of extinction and when it would actually go extinct is about 60 years,” Akçakaya said, “we found that the warning time can be as short as 20 years for some species, especially if information about their population is limited.”

As budgets are being debated in Washington, D.C., federal funding for climate research is uncertain. Beyond dollars and cents, Chang said, the science behind climate change is clear, and Stony Brook researchers will continue to push our knowledge of the phenomenon and seek solutions to outsmart Mother Nature.

Victoria Cebalo Irwin is a freelance writer based in Berkeley, California.

When the Stony Brook Union opened on February 1, 1970, it was the first spot on campus students could truly call their own, the start of the “evolvement of a real community,” according to The Statesman. The Union... 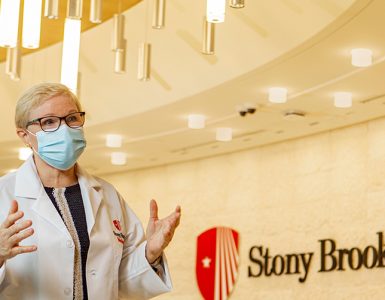 “I’m sure we would all like to go back in time to when an epidemiologist wasn’t in most people’s normal lexicon,” said Dr. Susan Donelan. She means this past February, which seems like a lifetime ago. Epidemiology — the...