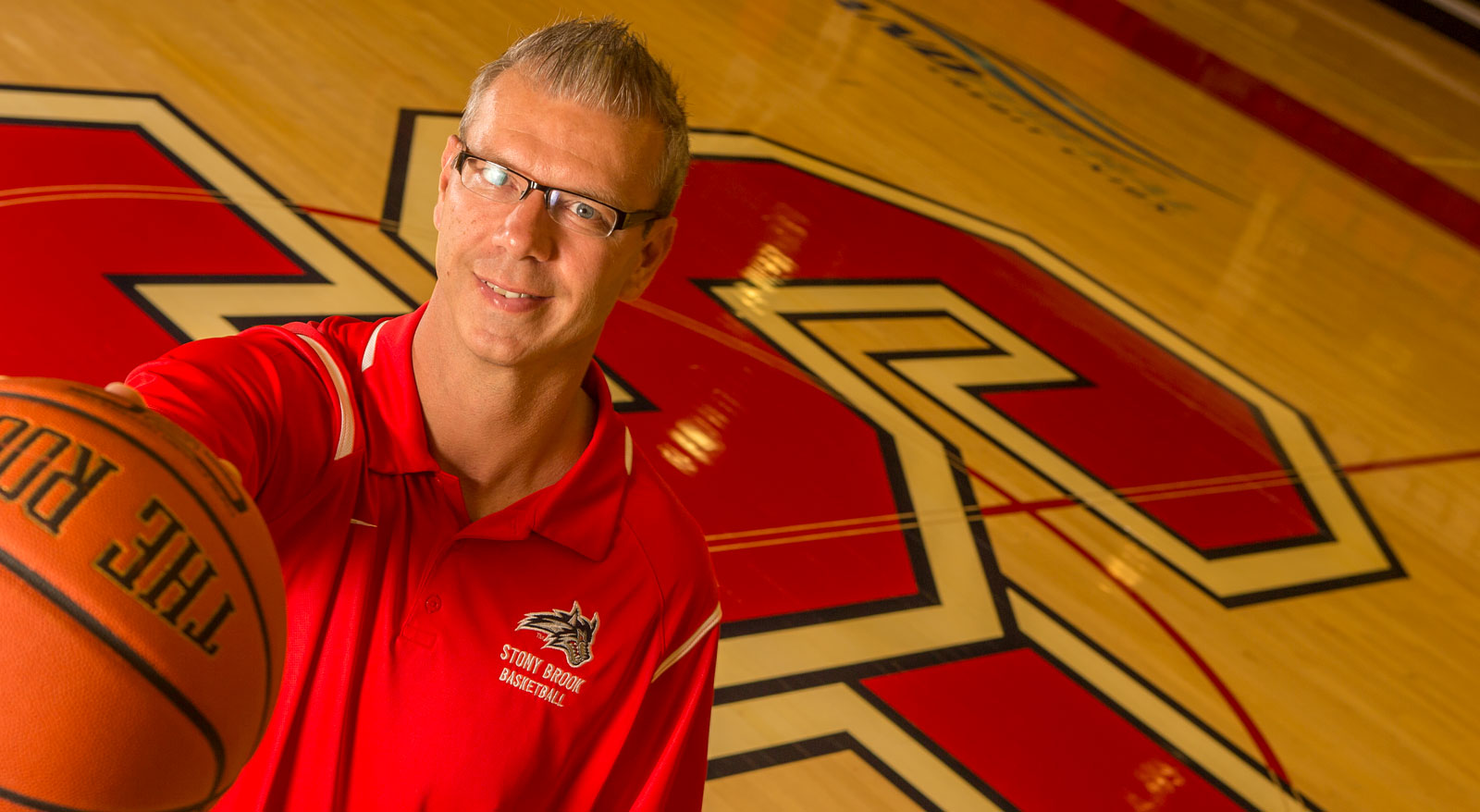 It was the kind of sticky, sultry mid-summer day in which everyone and everything moved in exaggeratedly slow motion, yet head coach Jeff Boals remained cool and energetic, tirelessly fielding phone calls, plugging entries into his calendar and greeting members of his new staff.

Classes would resume at Stony Brook University in just a few weeks and Boals needed to assemble — or in this case, rebuild — much of the men’s basketball team.

In one corner of Boal’s office sat his son Chase. Like many 10-year-old boys, Chase was glued to his smartphone, yet he looked up from his screen occasionally to take in the flurry of activity swirling around him, visibly exuding a sense of pride in his role-model dad as he adroitly tackled the never-ending challenges of the fast-paced day.

Chase had been keeping his father company for a week, and the two eagerly awaited a reunion with the rest of the family — wife Katie and daughter Sydney — when they would move east from the nation’s heartland during the first week of August.

For Boals, being away from family was the hardest part of his new job. In April he was hired to take the place of 11-year veteran coach Steve Pikiell, who after leading the Seawolves to their first-ever appearance in the NCAA Tournament in March, had left Stony Brook to take the helm of Rutgers University’s men’s basketball team.

But as Boals awaited his loved ones, he eagerly anticipated joining his new Stony Brook team “family” for the first time on the hardwood court of Island Federal Credit Union Arena.

It is an understatement that Boals takes the concept of family — and his role as a father — seriously. Indeed, the new coach wants the team to see him around his children a lot.

“There are life lessons to teach,” he said. “It is important to me that these young men see what it means to be a father.”

Before he came to Stony Brook, Boals was the assistant coach at powerhouse Ohio State University, where he helped that Top Ten basketball program amass 193 wins and three regular season championships in seven years — before learning that Pikiell was departing Stony Brook.

“I love Shawn’s passion and his vision and I love President Stanley’s enthusiasm,” he said.

Both Heilbron and President Stanley were so persuasive that Boals agreed to come to Stony Brook sight unseen. “I didn’t even see the facilities until after the press conference,” he said, adding that it is much easier to take over when a winning culture is already in place. “You don’t have to change the prevailing mind-set.”

He inherited a team that made it to hallowed ground for the first time in school history by beating Vermont and advancing to the NCAA Tournament. But graduation 2016 dealt Stony Brook a harsh blow, as three of its most accomplished players who formed the heart and soul of the team moved on.

One of those players, Jameel Warney, was the face of the franchise.

Boals said a player of Warney’s ability and character only comes along every 10 to 20 years.

“He was like Linus’s blanket in Peanuts — he was our comfort zone,” said Boals. “In the last game of the year, Jameel said he wanted the coaches and players to jump on his back because he wanted to carry us home.”

Still, Boals is not wringing his hands over the departure of talent. When he was assistant coach at Ohio State, Boals was entrusted with many head coaching duties, including recruiting, so he is confident that the legacy of Warney and company will continue to attract major talent to Stony Brook. Once those student athletes get a sense of Stony Brook’s basketball climate, they will want to be part of it.

At Stony Brook, Boals said  he is emphasizing defense.

Anytime you play great defense, you can be in a game,” he said. “A lot of times you are not going to shoot well, the ball won’t go in the basket or you are going to turn the ball over. Rebounding, on the other hand, is a matter of desire. Defense will be our staple.”

As a way to ease the transition to becoming a head coach, Boals attended a Villa 7 Symposium, a two-day, invitation-only conference. It is there that head coach aspirants can tout their talents to prospective schools in the hope of nabbing a coveted position.

Still, there is no substitute for on-the-job training.

So who is Boals relying on to get the Seawolves back to the promised land? Players such as junior guards Lucas Woodhouse and Kameron Mitchell will be joined by brand new Seawolves like Michael Almonacy, a freshman guard.

There may also be a new role and more playing time this year for Germany-born Roland Nyama, a junior guard/forward. Another junior guard/forward, Bryan Sekunda, is on the mend from a torn ACL (anterior cruciate ligament), which ironically, is the injury that turned Boals from a promising collegiate player into a coach.

“There is no reason why we can’t win a league championship this year,” said Boals. “But we will have a bull’s-eye on our backs.”

To Boals, getting to the next level means consistently making it to the NCAA Tournament. He defines success as much more than wins and losses.

“I tell the student athletes that there are three non-negotiables for playing on this team: going to class, attitude and effort.’’

Boals eagerly assumes the role of off-the-court mentor, and plans to educate the players on important issues, such as gender and racial equality and instill in them the value of community service.

Just as important, Boals said, is a focus on their futures.

“I want the team to understand that there is more to life than basketball. When the ball stops bouncing, you have to prepare for a job and a 401 (K),” he said. “To succeed in basketball or in life — whether it is looking for a stop and making a buzzer beater in the final seconds of a championship game, coming to terms with a season- or career-ending injury, or being a good role model to your children — it all comes down to mental toughness.”