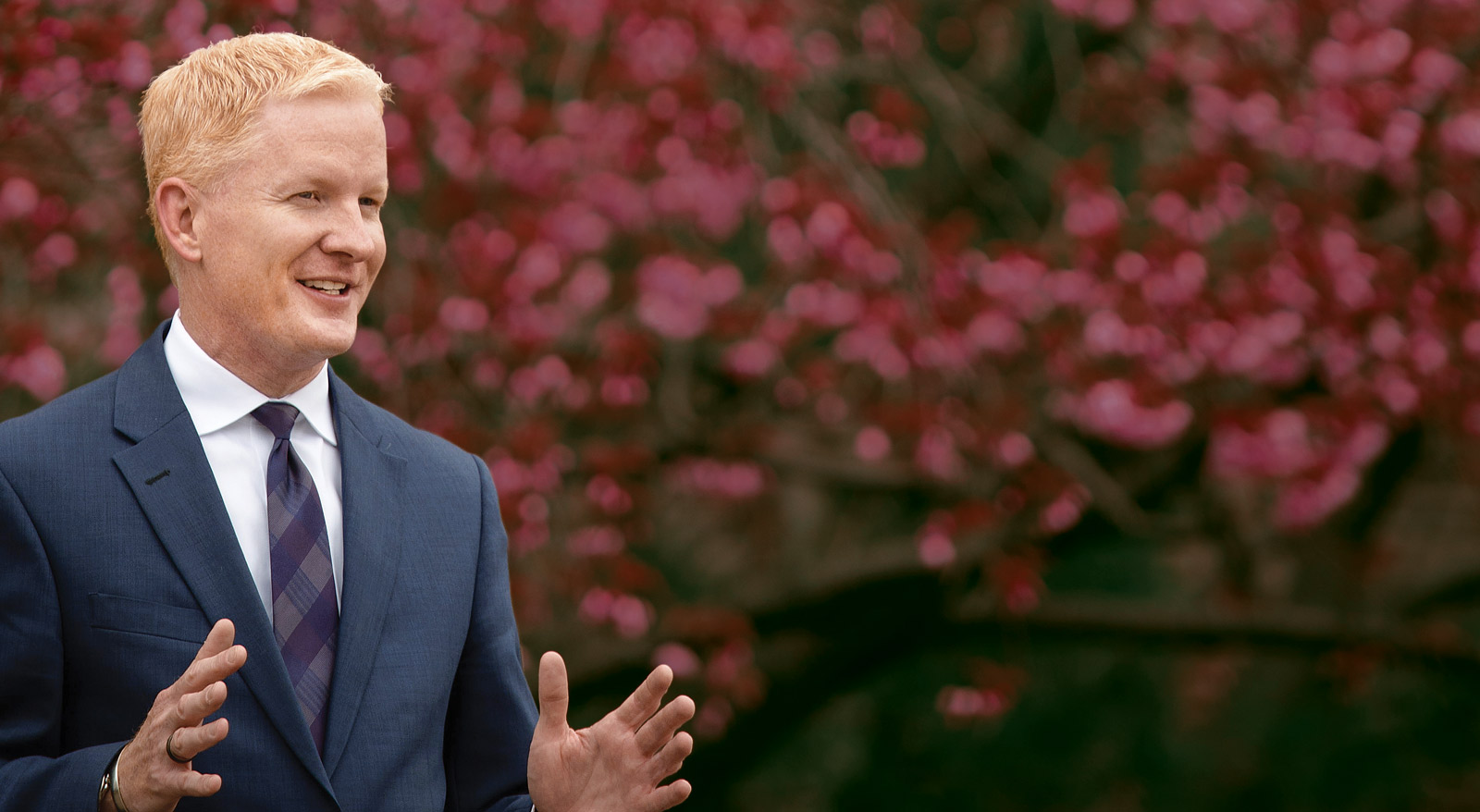 Fox is an actor and philanthropist. He received the honorary degree of Doctor of Fine Arts, recognizing a career that has brought international acclaim, as well as a dedication to charitable endeavors best exemplified by the founding and stewardship of the Michael J. Fox Foundation for Parkinson’s Research.

“Every single one of you has the power within you to impact the world, if you choose to act,” Fox told the students.

Oringer ’96, received a Doctor of Science degree for his contributions to the technology industry as a programmer, photographer and serial entrepreneur. His accomplishments include the invention of one of the Web’s first pop-up blockers, and the creation of Shutterstock, the global technology company that reinvented the image licensing industry. It provides images, videos and music to businesses, marketing agencies and media organizations around the world.

PRESIDENT STANLEY, DISTINGUISHED GUESTS, FACULTY, STAFF, STUDENTS AND FAMILIES, I am very grateful to be here today and among such remarkable honorees.

Today, I want to share three lessons I learned here at Stony Brook, which have served me well throughout my entrepreneurial journey. I will be brief, because I know you are all ready to be graduates — and most important to me, I’m so ready to be referred to as Dr. Oringer — so I know the quicker I finish this speech, the quicker we can both achieve our goals.

I started my college education here in 1993; graduated in 1996. I lived in Roth Quad and majored in computer science and math. I really had a great time and learned a ton. Thinking back on what I would have done if I was writing this speech as a student, 20 years ago, I would have probably started last night around 10 pm, drunk a lot of coffee, ordered a pizza, opened my laptop (which weighed like 12 pounds), and then begin to freak out, mostly because the pizza had yet to show up. Seriously, planning ahead was not my strength, but the good news for me is that I was a quick learner.

Today, I know that my address to you on this momentous day is filled with potential and possibilities. Therefore, I have taken this responsibility very seriously; started on my speech five weeks ago, and thought a lot about what I would have wanted to hear when I was graduating.

So, I have three life lessons to share. They are: Stay curious, take calculated risks and embrace diversity. So here goes:

LET’S START WITH STAYING CURIOUS.
The one thing I always loved about Stony Brook was how accessible professors were. It’s one thing to be helpful, but what I found here was that “office hours” didn’t really exist. For the curious like me, I could knock on any professor’s door and most of the time they were open to talking to me.

Curiosity opens doors — literally in this case — it precedes every discovery and invention; it teaches us new things.

A great example of this was when my interest in computer graphics — and more specifically virtual reality and how it intersects with medical visualization, a topic that was cutting edge 20 years ago — led me on a quest to find out more. Somebody had mentioned a professor named Arie Kaufman (he’s still here) who was working on exactly that. I looked him up in the University directory and found that he had an office high up in the Medical School building.

Knowing I had to meet him and find out more, I walked into that building, went up to his floor, knocked on the door, and he invited me in — and indulged my curiosity. I remember having a very long and involved conversation about this topic. After that meeting, I signed up for his class.

We have modeled Shutterstock in that same way. There are no office hours and people are free to find me (almost) anytime. In fact, at Shutterstock, not only do we not have office hours, we don’t have offices; we have desks out in the open so that we can collaborate better. Open collaborative environments, like the one you have here, are rare. I would make sure that both professionally and personally you surround yourself with people who embrace your curiosity because with curiosity comes vulnerability and that is where breakthroughs happen.

Curiosity opens doors — literally in this case — it precedes discovery and invention; it teaches us new things; it makes us better than we could have ever imagined! It has led me down an amazing path, helped me build an incredible company, and find the most remarkable people to guide and inspire me along the way.

MY SECOND STONY BROOK LIFE LESSON IS TAKING CALCULATED RISKS. I was sitting in a class called Operating Systems, and at that time a little company called Yahoo! was about to go public, and it was starting to become clear to me just how powerful the Internet was. My professor (his name is Larry Wittie; he’s still here) opened his lecture by astutely saying there are two ways you can go in life: “You can either help people create things and you will be very successful at it, or you can go out, take risk and create something of your own and create a level of success much greater.” He had my attention.

A calculated risk is one where you understand the downside and are still willing to take the risk because there is large potential upside. A calculated risk is what you take when you put your cardboard and duct tape boat in the Roth Quad Pond for the Regatta. The upside is the glory of winning, but the downside is swimming in a pond for a few minutes. The risk is definitely worth it.

Today, it is so easy to start a company. You can create a website in a few clicks, gather global research, and test your product with live users, all while working at home in your pajamas.

Since I was young, I had always wanted to start a company, but what I didn’t realize until that day my professor said what he did was how to balance the risk and the reward.

I wanted to build a company and take it public. So that’s what I did. I resisted getting a job. I figured out if I could write some software and sell it, and hopefully pay my rent, I could sustain taking enough calculated risks to find success. That was company try No. 1. It took 10 more calculated risks, 10 more (different) bootstrapped companies, over a seven-year period, to get to Shutterstock. It then took 10 more years; but in 2013, Shutterstock broke a $1 billion valuation as a publicly traded company on the New York Stock Exchange.

You are young. It gets harder and harder to take calculated risks. You will fail sometimes. You will learn things about yourself that will scare and inspire you simultaneously. Taking calculated risks is a numbers game. Shutterstock was my 10th business. But the law of numbers will be on your side the earlier you start, and I think you should start today.

So, I would say, if you are thinking about starting a business, pursuing a passion, or merely heading down a path with lots of unknowns, take the advice I received from Larry 20 years ago: start sooner rather than later.

AND FINALLY, THE THIRD TOPIC I WANT TO TALK ABOUT, DIVERSITY.
I truly believe that the most successful organizations thrive off diversity. Shutterstock is a very diverse company. Our team of 850 people is comprised of 40 percent women with an effort to keep that number growing. This is just one fact about our diversity. We want to attract the curious, the motivated, the passionate to be our colleagues no matter who they are or where they come from. Our customers, contributors and employees include people in nearly every country, of every religion and race. Diversity is not a program; it is a requirement. I’m sure of these three facts:

First, the most successful universities will be the ones that search for talent no matter where that talent is.

Second, the most successful companies will be the ones that make diversity a priority.

And, third, the most successful countries will be the ones that have immigration policies that attract, retain and truly embrace the smartest people on the planet, while at the same time serving those people most in need, wherever they may come from.

Stony Brook is, and always has been, very diverse and welcoming — and I know it’s one of the values that the University strives for. This is one of the reasons why all of you received an amazing education.

At Shutterstock, we have expressed our opposition to the recent travel bans that our current administration has tried to enforce. We regularly sponsor H1B visas to attract talent from all over the world, and have seen our sponsored employees go on to get green cards and even become full citizens of the United States.

So, to wrap this up, I want to go back to the three things I started with:

Stay curious. Ask questions — and make sure you get the answers.

Don’t be afraid to take calculated risks. But at the same time make sure you understand both the upside and the downside.

Embrace diversity. Only together can we truly make the world the best it can be.