The notion that academic computing is confined to hard science and math is as outdated as the Commodore 64. Today, researchers in every discipline, including the social sciences and humanities, need the power of high-performance computing to push the boundaries of their fields.

“Thanks in large part to IACS, Stony Brook is emerging as an international leader in modern computational science,” said Robert Harrison, professor of applied mathematics and statistics and founding director of IACS. “Here, the tools of modern artificial intelligence (AI) are revolutionizing all disciplines — for example, continental- scale Antarctic ecology, design of materials and computational linguistics.”

Innovations in high-performance computing (HPC), Harrison said, are opening new frontiers to scientific discovery. With the support of multiple projects funded by the U.S. Department of Energy, IACS researchers are on the bleeding edge of new software and algorithms for emerging exascale computers that are capable of performing one quintillion — that’s 1,000,000,000,000,000,000 — operations per second.

Such staggering computational power has extraordinary promise, potentially enabling the design of environmentally sustainable energy technologies through clean and efficient conversion of biofuels or increasing the detail and accuracy of predictions for future climate change.

As research needs become ever more complex, boosting power and speed is of the essence. Last year IACS received a $5 million grant to deploy a Cray supercomputer that harnesses advanced processors designed as part of Japan’s path to exascale computing. The computer will be used by researchers nationwide, preparing U.S. science to make full use of emerging advanced computer technologies and enhancing national competitiveness. IACS recently received an additional donation of $6.3 million from the same anonymous donor that founded the Institute with an endowment of $10 million.

“These funds will enable us to expand and advance the programs available to our researchers and students,” Harrison said. “We plan to create fellowships that compete for the same high-caliber applicants who would apply for National Science Foundation or Department of Energy fellowship opportunities.”

The funds will also support the STRIDE (Science Training and Research to Inform Decisions) program, which aims to provide STEM graduate students with the interdisciplinary skills they need to effectively communicate complex findings to policymakers, facilitating positive change.

Modern climate modeling started in the 1950s with an atmospheric study aimed at enhancing short-term weather forecasting, Zhang noted. By the 1970s, scientists realized that they needed to take the ocean into account if they wanted to look further into the future.

“By the ’80s, it was clear that the CO2 number was trending up, something that continues to this day,” he said. “We realized that it was critical to build longer-term models.”

However, building those models requires a huge amount of data and high-performance computers with the capability of processing it.

“We also don’t know what will happen as still more CO2 is released from frozen lands as they thaw,” Zhang warned. “We need to model thousands of years to get the climate information we’re looking for. Only supercomputers can enable research of this magnitude.”

It’s not just the magnitude of climate change that poses a challenge; it’s also the rate at which it is changing.

“Man has been on the Earth for maybe 60,000 years, but in the past 150 years he has changed the composition of the atmosphere on a global scale,” Zhang said. “Supercomputers like the ones we are using in IACS give us the means to more fully understand it, and deal with it responsibly moving forward.”

Heather Lynch, associate professor of ecology and evolution with a joint appointment in IACS, would agree. Lynch began her college career in chemical engineering before falling for the charms of physics, and then applied math and ecology. Since joining the Stony Brook faculty in 2011, she’s been able to push the envelope even further, moving into computer science and computer vision.

“IACS is a perfect home to consolidate all my interests,” she said. “A lot of the challenges across science are similar once you get past the lingo. IACS lets us find the connections.”

One of Lynch’s major initiatives is developing tools to use satellite imagery as a means of surveying penguin colonies throughout Antarctica. In the past five years, HPC has taken giant leaps forward, expanding the scope of contemporary research.

“It’s not just doing what we do faster; there are whole new categories of things we can analyze,” Lynch said. “Your capabilities increase exponentially.”

She reported that the first survey of Adélie penguins took 20 person-months of work. “Now we can do something like that in maybe a week,” she said. “It’s many orders of magnitude faster.”

Lynch explained that by studying how penguins are affected by climate change, we may be able to understand how other animals, and the state of the planet as a whole, may be affected.

“One of the most important parts of our research for me is the ability to connect the science to the policy and to try to help Antarctic policymakers protect the environment,” she said.

The biggest payoff is that her efforts can benefit researchers across all of science, not just in the areas in which she studies.

“I’m a big believer in the IACS mission,” she said. “It pulls together so many areas of expertise, and Robert [Harrison] has put in a tremendous amount of hard work to make it easier for people to collaborate.” 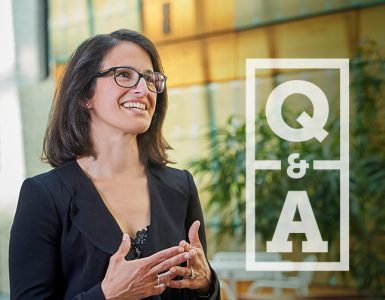 Associate Provost for Academic Success Rachelle Germana, Division of Undergraduate Education, shares with us how Stony Brook’s holistic, multidimensional approach fuels student success.  WHAT IS YOUR ROLE AT SBU? WHAT...