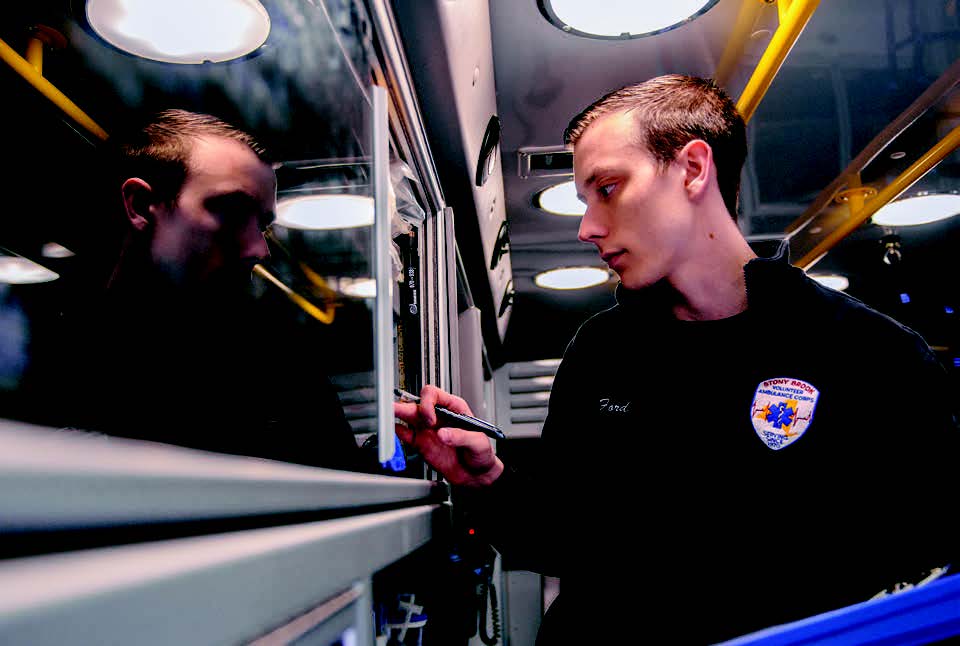 There will be 9 million new STEM job openings between now and 2022, and Shane Ford ’17 wants one of them — preferably as a medical researcher, maybe even a doctor. The student from Riverhead, New York, concedes it’s an audacious ambition. After all, no one in his family was a physician. No one had even attended college — he was the first.

But to say he is determined is an understatement. An overachiever at Riverhead High School, Ford didn’t have time to consider the possibility of failure. He was too busy checking the boxes for college: all AP classes, a 4.0-plus GPA, extracurriculars, a part-time job, community service. It was a demanding workload, but just what the self-proclaimed learning junkie loved. It was also what he needed, because while he was keeping his head well above water at school, he was nearly drowning at home.

Ford was shuttling between divorced parents, coping with a sibling battling addiction and suffering the hardships of an economically unstable home. School gave Ford a sense of control in an otherwise uncontrollable and dysfunctional situation. “Having a 4.0 was the only good news our family could share,” he said.

When it came time to apply to colleges, he was accepted by many of his dream schools, including Boston College, Johns Hopkins and Stony Brook. But it was an exercise in futility, he said. “Whether the sticker price was $6,400 or $64,000 a year wouldn’t make a difference; I just figured I’d be lucky to go to community college.”

It’s an all too common dilemma for many struggling families with academically accomplished children living in Riverhead — one of Long Island’s most economically distressed areas. But something uncommonly fortunate finally happened to Ford: He found out, by chance, about a new scholarship created specifically for deserving Riverhead High School students who want to earn a STEM (science, technology, engineering and mathematics) degree from Stony Brook University.

Established in 2012 by Riverhead-based Corey Foundation, the scholarship program has already changed the trajectory of Ford and 32 of his fellow Riverhead High School graduates, eight of whom graduated this past May.

Turns out Riverhead High, which is earning wide praise for its challenging STEM curriculum, is a hotbed of budding scientists who struggle with the same, seemingly insurmountable, obstacle to college. The high school’s principal (and Stony Brook alumnus), Charles Regan ’02, said the Corey Scholarship offers a multiplier effect.

“It’s a great opportunity for our students to attend a very prestigious four-year university, which is becoming increasingly difficult to get into,” said Regan. “And it’s also good for the University and Long Island to keep homegrown talent here.”

Just having a shot at the Corey Scholarship is pushing many of Riverhead High’s already ambitious science and math students to work harder and aim higher. “Our students understand the value of a Stony Brook degree,” said Regan. “They know it’s a launching pad to go on to do bigger and better things.”

Aiming to do better and achieve more is at the core of the American dream. According to the U.S. Department of Education, only a third of children from low-income families at or below the poverty line attend college, and fewer ever graduate. As the cost of college rises, the dream moves further out of reach.

The Corey Foundation and others who fund scholarships and fellowships understand that affordable state universities such as Stony Brook continue to be the catalyst for upward mobility and a solution to crushing student loan debt. Stony Brook does this better than most.

In fact, a study by the Stanford Institute for Economic Policy Research ranks Stony Brook among the top 10 colleges and universities in the nation for creating a proven path of upward mobility: 51 percent of Stony Brook’s students from the lowest quintile of income distribution make it to the top economic quintile.

For Ford, attending Stony Brook quickly surpassed his expectations. “It was a lot harder than I expected,” he conceded, but also said it provided a lot more opportunities to validate his interest in medicine, including volunteering with the campus Ambulance Corps.

A representative from the Corey Foundation pointed out that Riverhead High students like Ford and his classmates, who work so hard under such challenging circumstances, deserve all possible means of support. “It’s been so gratifying to help facilitate the future of these remarkable students,” said the representative, “and wonderful to now see them move confidently out into a world that welcomes and needs their skills and diverse perspectives.”

Biology major Karla Reyes Ortiz ’17 is well aware of the need for more clinicians who understand their communities, literally and figuratively. During her internship with the Stony Brook student-run Health Outreach and Medical Education clinic, she interpreted for Spanish-speaking patients — something she’d done for her parents after her family first immigrated to the United States.

“Once patients realize they can express what is bothering them and understand what their physician is saying, they open up and get the help they need,” said the recent Corey Scholar graduate.

Stony Brook is committed to providing financial and other support to students across the socioeconomic spectrum, and as the cost of educating students continues to rise — particularly in STEM fields — scholarships such as those offered by the Corey Foundation are critical. Scholarships also help recruit and retain the most academically gifted, which in turn attracts in-demand faculty who want these top students in their labs.

Corey Scholar Edgar Samudio ’17, a computer science major who earned top honors at Riverhead High School, had an offer from New York University. But he chose Stony Brook, where he knew he’d get an equally exceptional education, remain closer to his family and — most important — graduate with minimal student debt. His family had saved some money for Samudio and his sister for college, but did not have enough to send both. Then more bad news arrived: Samudio’s mother was diagnosed with an advanced case of breast cancer and required costly treatment.

“The day I was awarded the Corey Scholarship was one of the best days of my life,” said Samudio. With the financial burden somewhat lifted, his parents were also able to support his sister in college. Both siblings graduated from Stony Brook together this past May. And their mother, who was able to receive treatment and is now in remission, was there to celebrate with them.

Shane Ford celebrated his graduation in May debt-free. He was accepted to Stony Brook’s graduate program in biochemistry and is well on his way to a medical career. He continues to work with his mentor, Jun Chung, associate professor in the Department of Pathology, in his research lab studying breast cancer metastasis. He’s grateful for his scholarship, mentors and the feeling of gratitude and memories he said that will stay with him forever.

Most vivid of all, he remembers, was the life-changing moment when he found out he’d been awarded a Corey Foundation scholarship.

“I ran into the kitchen and told my dad, and he immediately started crying. It’s what I’m most grateful to the Corey Foundation for — that my parents didn’t have to feel like they failed in some way because they couldn’t help me with college. It weighed on them more than they let me see.”