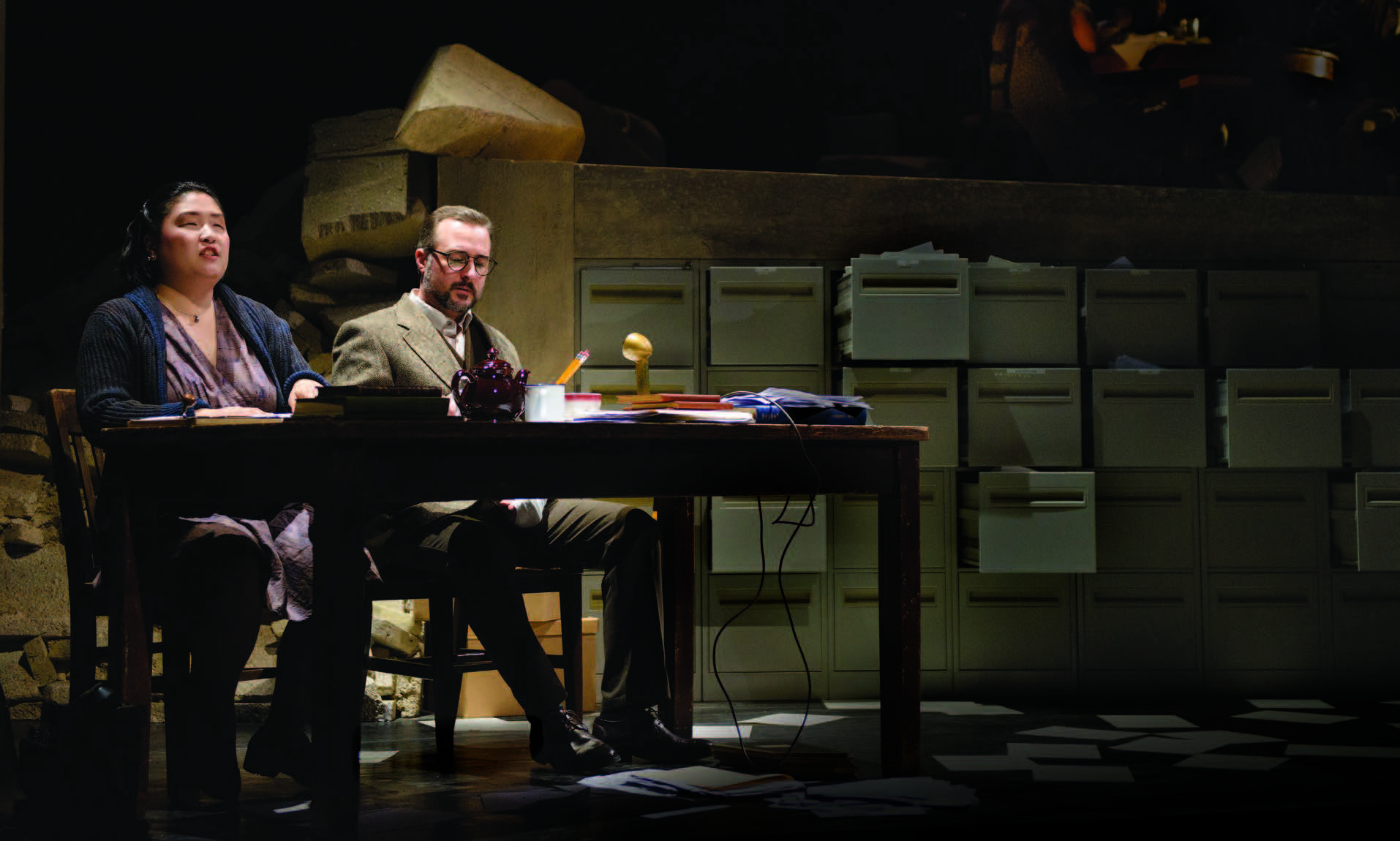 Treading in the footsteps of Andrea Bocelli, Stony Brook’s Ju Hyeon Han made history this past spring, becoming the first blind singer to be cast in a leading role in an American conservatory or University opera production.

Soprano Han headlined Stony Brook Opera’s production of Benjamin Britten’s The Rape of Lucretia at the Staller Center Main Stage in April. While studying for a Doctor of Musical Arts in vocal performance degree, she took on the challenging role of the Female Chorus, which “speaks” throughout Britten’s opera for the women characters.

For Han, who lost her sight as an infant, these performances represented the fulfillment of a life’s dream.

“I feel so honored that Stony Brook gave me this amazing opportunity,” she said. “So many people told me that it would never happen, that opera would be impossible for me and I shouldn’t even try. However, the SBU voice faculty are very open-minded and they wholeheartedly embrace the belief that a university is an educational institution, so that I should get the same education and opportunities that my sighted colleagues are getting.”

As expected, the opera presented numerous challenges for Han, such as being unable to get visual cues from conductor Timothy Long, associate professor in the Department of Music. She solved this by putting in extra work to learn the musical score so thoroughly that if something went awry, she would be able to fix it on the fly.

Then there was the challenge of playing a part that might not feel true to character. Director Ted Altschuler decided to use Han’s blindness as part of her role, attributing her lack of sight to a war injury.

“I haven’t had to pretend to be something I’m not and this permitted me to really get inside of the character of the Female Chorus, draw from my own life experiences, from the libretto and the music, and make the character my own,” she said.

Ever since I can remember, I’ve had a burning desire to sing and make music my life.

Han also had to be careful moving about the stage. “Ted always had me close to something physical I could touch so I knew where I was at all times and never felt unsafe,” she said.

In addition, the cast had her back. “Because my area was close to the orchestra pit, during our first rehearsal someone would call out and warn me if they thought I was getting too close to it,” she said.

Han’s teacher, Randall Scarlata, artist-in-residence in the Department of Music, helped the classically trained singer overcome any vocal challenges that arose during rehearsal.

This wasn’t Han’s first Stony Brook concert, but it was her first fully staged opera role. Han has many talents, chief among them a two-and-a-half-octave range. She also plays piano, flute and violin, and has performed with the Baroque Ensemble, the Stony Brook University Orchestra and the Stony Brook Chorale.

“Ever since I can remember, I’ve had a burning desire to sing and make music my life,” Han said. For inspiration she looked to opera singers Maria Callas, Janet Baker, Dietrich Fischer-Dieskau and Renée Fleming.

Working with Han was quite a different experience for Long. “I’ve loved working with Ju Hyeon,” he said. “She has perfect pitch and a very quick memory and is quite independent. Because she cannot see, she often learns scores more completely than sighted singers. She’s acutely aware of orchestrations and beats. You might think that there would be an issue, but there’s none. I adore her and am extremely proud of her.”

Perry Goldstein, chair of the Department of Music, concurred. “Since Ju Hyeon came to Stony Brook, she has overcome every obstacle in the way of getting the most out of her education. She is carrying a perfect grade point average and has never shied away from a challenge. She approaches everything with great humor and a ‘can-do’ attitude that is an inspiration.”

Recently, Han took on new challenges. Accepted into the elite American Bach Soloists Academy in San Francisco, she underwent an intensive musical boot camp under the tutelage of leading early-music performers. The experience culminated in a performance of Purcell’s vocal masterwork, King Arthur.

After she finishes her doctoral studies, Han plans to audition for opera companies, apply for teaching jobs at both the college level and with younger students who have special needs, or figure out a way to launch a career as a concert singer.

“I am particularly interested in taking classical vocal music to the community, hospitals, schools, nursing homes and group homes for adults with disabilities, and would love to pair a musical program with inspirational speaking,” she said. “I’ve had a life full of adventures, and l would love to share my life story to show that life is good even with a disability and blindness is nothing to fear.”

Aside from music, Han counts her white cat Emma and black Labrador guide dog Giada as her passions.

“My animals help ground me and give me unconditional love and laughter every day,” she said. “I can’t tell you how good it is to come home to a purring cat or to have a dog to hug during breaks in rehearsals. Of course, Giada is my eyes, my hero and my constant companion. I commute from Brooklyn to Stony Brook and Giada has saved my life several times, putting herself between me and a car that was turning without looking.”

Lacking sight doesn’t prevent Han from seeing the big picture — breaking ground for others. “I really hope other educational institutions and professional opera companies will see this opera and give the same opportunities to other blind singers out there, because with creative and open-minded directors and conductors, inclusion definitely works.”