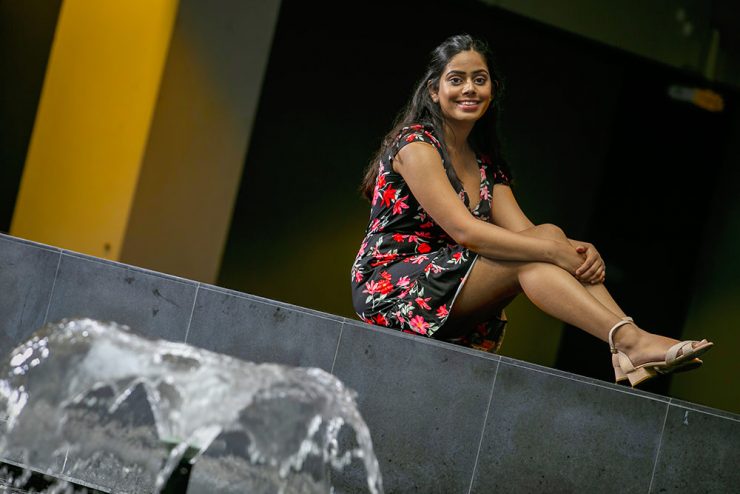 Growing up in a sheltered, religiously conservative household, Stony Brook psychology major and University Scholar Zaynab Ubaid ’19 was determined to make her mark at Stony Brook.

“When I enrolled, there were so many things I had to catch up on, socially, educationally and personally,” Zaynab said. “I pushed myself to get out of my comfort zone and said yes to many opportunities that I had been deprived of. I am extremely grateful to the University for allowing me to do that.”

In order to cope as a youngster with what she describes as a patriarchal family, Zaynab had to be a stealth self-educator. When she was 12, she waited for her neurologist father, who suffered from chronic insomnia, to drift off to sleep with the aid of soothing video lectures — just so she could listen in and learn about neurological disorders. It made her, in her words, “an oddly curious child.”

That curiosity led to a Bachelor of Arts degree in psychology, six Academic Achievement Awards and a 3.98 GPA.

“The struggles and achievements I have experienced at Stony Brook have shaped me into the woman I am today — a person I have learned to be proud of,” Zaynab said.

Her proudest achievement was helping to found the Communications Club on campus. “It was a way to give more opportunities to those students who had — or wanted to explore — a more humanities-focused approach at a STEM-based school,” she said.

The club’s field of interest includes film, television, business, law, marketing and English. Its charter was approved prior to Zaynab’s graduation this past May.

Although she loved science from childhood, Zaynab began her Stony Brook academic career as a journalism major.

“I loved brainstorming story ideas, finding a unique angle, researching, reaching out and interviewing sources and putting a story together in a coherent, concise piece,” she said. “But I realized this could not be my career goal long-term. I was putting too much into myself and losing myself in the process. I was burning myself out.”

She wrote one of her favorite pieces during the presidential election of 2016. As candidate Donald Trump promised to reverse the DACA program if elected, Zaynab chose to write a story on DACA recipients and how his presidency might affect undocumented immigrants.

“It was a remarkable experience to have undocumented immigrants trust me enough to talk to me and let me to report their stories,” she said. “I also wanted to hear the other side of the story. I remember tweeting to a conservative columnist and thinking he might never respond, but when he finally answered me he explained why he opposed the DACA program. All in all, it was a cool experience.”

That’s why  Zaynab, who enjoys connecting with people, made business and journalism her minors, with the intention of entering the public relations field. “In fact,” she said, “I hope to one day manage my own PR team.”

Her advice to other students in search of an academic and professional path is simple: “Don’t be afraid to step back to preserve your mental health or change your mind if something doesn’t feel like it was meant for you.”