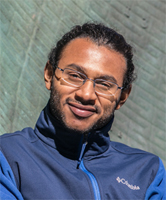 The URECA website regularly features students’ perspectives on research and/or creative activities. This month’s student is Wilka Carvalho, a senior majoring in physics who has been working since sophomore year in the Experimental Nuclear and Heavy Ion Physics Group of Professor Axel Drees, Department of Physics and Astronomy, developing libraries in C++ that model and simulate data from an internally reflected Cherenkov light (DIRC) particle detector.

This fall, he began working on an independent research project with Assistant Professor Giancarlo La Camera, Department of Neurobiology and Behavior, performing time-series analyses of neural data. Wilka has sought out experiential learning experiences each summer. In 2012 he participated in an engineering research program at National Central University in Taiwan. The following summer he participated in an REU program at the University of Minnesota in Minneapolis, and this past summer, Wilka was at the California Institute of Technology as a Howard Hughes Medical Institute/HHMI MURF Fellow.

Wilka is a Louis Stokes Alliance for Minority Participation (LSAMP) Scholar and C-STEP participant, and a recipient of the NSF-Scholarship for Science, Technology, Engineering and Mathematics (S-STEM). He has been involved as a math and physics tutor for students in the Educational Opportunity Program (EOP), and this coming spring will be serving as a teacher/mentor in Stony Brook’s new NIH-funded Bio-Math Learning Center. He has also served as a student assistant for Undergraduate College facilities.

Wilka is a member of the Sigma Pi Sigma Physics Honor Society and the Society of Physics. He plans to pursue a PhD in theoretical neuroscience and to build on his knowledge of physics — including his exploration in fields such as applied mathematics and computer science — to apply topics such as network theory and computational complexity toward understanding the brain.