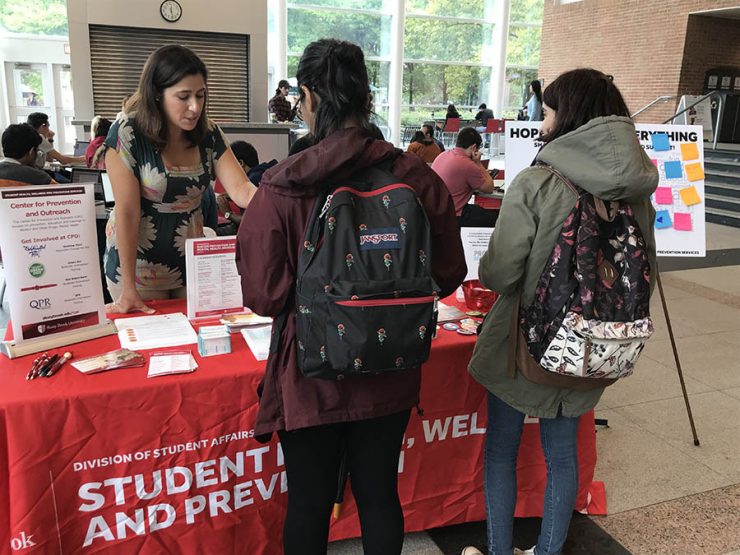 In 2016, the Centers for Disease Control and Prevention found that 10 million people had serious thoughts about suicide. The same study reported that suicide was the second leading cause of death for people 10 to 34 years of age.

These and similar statistics make preventing suicide an ongoing priority at Stony Brook. This year, with the aid of a major federal grant, the University is expanding its efforts to turn the tide.

Since its founding in 2005, the campus Center for Prevention and Outreach (CPO) has applied a public health approach to creatively educating the campus community about health risks including toxic drinking, sexual violence and mental health crises that could lead to suicidal behavior. The Center says it believes that greater awareness and education of these issues can reduce stigma, helping those affected come forward and find support.

This summer, CPO received a $300,000 Suicide Prevention Grant award from the Substance Abuse & Mental Health Services Administration, part of the U.S. Department of Health and Human Services. As September marks National Suicide Prevention Month, the Center is wasting no time putting those resources to good use.

“It’s no secret that mental health issues are increasing, so we need to expand the ways we provide early intervention and care that reduces stress,” said Dr. Smita Majumdar Das, CPO Director and the grant’s principal author. “Just as with physical illness, the earlier you catch it, the better the outcome.”

But what can be done when only some students that are struggling reach out for counseling?

Das provides this analogy: Stress is like an iceberg in that what we see on the surface is only a part of the problem. Providing students with a variety of tools for self-care and teaching the University how they can help others melt the ice, bit by bit, is the challenge.

“This is where technology, behavioral science and the careful use of nudges come in,” said the grant’s co-author, Ahmed Belazi. “By thoughtfully presenting some students with options that are tailored to their needs and identities, we’re doing a better job of empowering those same students with access to resources and support.”

Here are a few ways that CPO plans to use the grant:

“The grant is also about growing in understanding of what speaks to the student body…we want to give the campus community options that they will actually use,” Das said. “How do we get them to make the right choices? What messages work best? We plan to study all of that with the support of the grant.”

Gloria Lee ‘19 has helped support students in difficult situations for the past three years as a resident assistant. She was excited to hear about the grant.

“The majority of RAs are in charge of 40 residents at a time, and we don’t see all of them regularly,” she said. “However, I think these new programs will help us reach more students and allow them to recognize when another resident might be struggling. They can be the bridge that allows us to step in and connect them to support. [Mental health resources] are essential for students, and it’s always reassuring to know that professionals are available and ready to help.”

Overall, CPO hopes that the grant will help them to continue shifting the perception of mental health struggles, Das said.

“One in three of us will face depression, so it’s important for students to realize that it’s nothing to be ashamed of,” she said. “We also want them to realize that mental health concerns are just as important as a physical illness. You wouldn’t ignore a cold — don’t ignore it if you’re struggling to cope with stress or depression.”

Check out CPO’s calendar for a full list of upcoming events.

Center for Prevention and Outreach