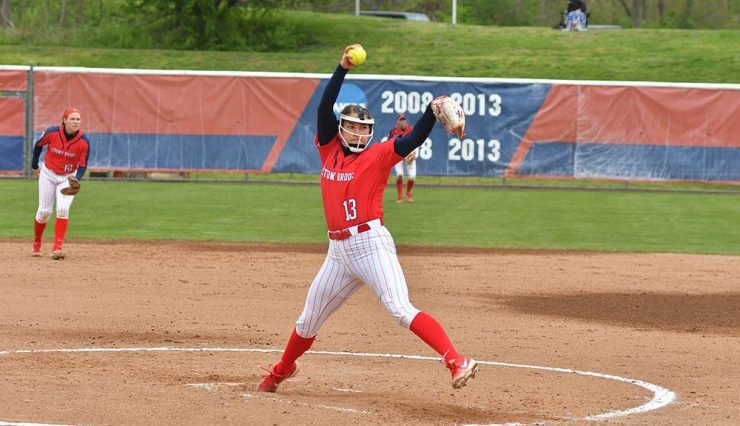 Only one player in any league gets to make the claim that they are the best in any season. And the list of players who can make that claim in consecutive seasons is a small one.  To give you some idea of how small, only 13 major league baseball players have ever won back-to-back MVP awards. In the America East Softball Conference, where the Seawolves play, only three players had ever won back-to-back Player of the Year Awards heading into the 2019 season.

Coming off a dream sophomore season that earned her the conference’s Player of the Year award in 2018, Stony Brook P/1B Melissa Rahrich ’20 drove herself with an even more difficult goal: to do it again!

“It was in the back of my mind to try and go back-to-back,” admitted Melissa, the second Seawolf to be named Player of the Year, following Bria Green ‘15. “To do that it was important to continue to work on my skills last summer. But another aspect that’s just as important to me is overall fitness and endurance, which also helps in taking me a long way.”

“A long way,” as it turned out, meant “all the way”: After the regular season ended in early May, the America East Conference announced that Melissa had accomplished the rare repeat, earning Player of the Year honors for the second-consecutive season, becoming only the fourth player in conference history to do so.

In fact, Melissa’s historic season almost took the entire team all the way. Unfortunately, a week after winning her Player of the Year honor, the Seawolves lost to University of Maryland, Baltimore County in the America East Championship Game by a score of 4-0, a heartbreaking ending to what was otherwise a great season.

“Coming into the season I was motivated to defend my title as Player of the Year,” said Melissa. “It was a goal of mine from the beginning and I knew that there were a lot of talented players in the conference that were also capable of winning it.”

Focusing on conditioning and improving her power numbers, Melissa went on to lead the conference with 17 home runs and 58 RBI, both tied for the second-most in league history. She also chipped in a league-leading .481 batting average in conference play. Incredibly, she struck out only twice all season. Opposing hitters were not so fortunate, however; as a pitcher, Melissa struck out 153 of them on her way to a team-leading 19 wins, including seven shutouts.

Though those opposing hitters would strongly disagree, Melissa said she doesn’t think of herself as a pitcher.

“I think I have a lot more to offer besides my pitching. In fact, when I was younger I hardly ever pitched because I was usually needed elsewhere. Pitching is so much fun, though, especially on good days. It’s nice to be able to dictate the game. But hitting home runs is a blast,” she said, pun fully intended.

Growing up in the Denver suburb of Brighton, Melissa caught the eye of Seawolves Coach Megan Bryant in 2016 at the annual college showcase that takes place in Colorado every July.

“Coach Bryant saw me playing there and showed interest,” said Melissa. “So my family and I made the trip out to Stony Brook for a visit.”

Current teammate Riley Craig ‘20 – a fellow Coloradan – made that same recruiting trip. Three years later, both are heading into their senior year at Stony Brook. Melissa credits her family and high school coach for helping her to get the most from her abilities. Melissa even describes her family as her biggest fans.

“They never miss a game whether it’s in person or on the livestream,” she said proudly. ”And my high school coach, Bob Gonzales, helped me not only improve my pitching skills, but my hitting skills as well. He shaped me into the player that I am today and has worked with me for many years.”

Having successfully defended her Player of the Year honor as a junior, Melissa looks to take her game to an even higher level in her senior year, with an opportunity to make history as the first America East softball player to pull off a Player of the Year “three-peat.”

“I think I can get better and quicker as a pitcher,” she says “As the season went on I was able to improve. So starting off from a higher level and continuing to go up from there will be my goal for the season. And I want to continue to improve my power numbers as far as hitting goes.”

This summer, Melissa will be traveling to various places, including back home to Colorado to spend time with her family. She also helps coach a 16-and-under softball team. Looking ahead even further, the psychology major hopes to become a graduate assistant for a team or an academic advisor after graduating in 2020.

Of course, before that day comes, Melissa has one more goal in her sights.

“I want a ring,” she said. “Now that we’ve experienced what it’s like to be in the championship game the only thing left to do is take the title. I want to finish my career on a high note.”