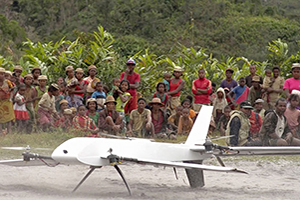 Most people still think of drones as weapons. At Stony Brook University, however, researchers and students are pioneering the peaceful use of drones – also known as Unmanned Aerial Vehicles (UAVs) – for scientific and humanitarian purposes.

They’re deploying these unpiloted flying machines to bring healthcare to remote villages in Africa, to aid in research and discovery in Antarctica and for fun and exploration on campus. Drones are taking Stony Brook research and the University’s commitment to global citizenship to places never before imagined.

Helping humanity
Ranomafana National Park in Madagascar is isolated, and the journey there is a grueling one. A long drive down a bumpy road leads to a trailhead, followed by an exhausting hike on a single-file dirt path that crosses rivers and mountain ranges.

It’s a taxing trip for even the healthiest of people. Now imagine making that same journey while eight months pregnant in search of prenatal care. That’s where drones, and the Global Health Institute (GHI) at Stony Brook, come in.

“There is an obvious need in this area and places like it for innovative approaches that bring healthcare out to the villages, so that they don’t have to make that arduous journey,” said Dr. Peter Small, Founding Director of the Institute.

Established in 2015, GHI is working to assist some of the world’s poorest populations with healthcare, economic growth and environmental protection.

In Ranomafana, a team of students and faculty at Stony Brook’s Centre ValBio laboratory have been researching the most efficient ways to identify the presence of parasites in nearby villages. But the lack of accessibility meant that the project moved at a snail’s pace, reaching only four villages in a two-week period. One day, a student joked with Small, saying, “Wouldn’t it be great if we could just fly a drone with the specimens back here every night?”

That comment was the seed for a one-of-a-kind program that is pushing the boundaries of healthcare delivery.

The team in Ranomafana is now using two types of drones to deliver medical supplies to 50 Malagasy villages. The program, called Drone-Observed Therapy System, or DrOTS, allows the villagers to send saliva samples to Centre ValBio for rapid tuberculosis testing.

The drones, which weigh anywhere from 15 to 45 pounds, can fly a shoebox-sized cargo container up to 90 miles. On a clear day, the drones are sent out a dozen times. And there’s no need for a pilot — these drones are completely autonomous.

“We go out into the villages and GPS potential obstructions, like tall trees and buildings, along with safe places to land in each village,” explained Jesse McKinney, technology officer for the Global Health Institute.

“Then, we return to ValBio, and using an interface that looks a lot like Google Maps, drop a trail of ‘breadcrumbs,’ which are GPS points,” she added. “The drone will figure out on its own how to move between those points safely and reach its destination. We have a couple of spotters out in the field for the first couple of [trips] just to make sure there are no issues, but beyond that, they are fairly easy for the villagers to use.”

Stony Brook students working in the field gain hands-on experience with cutting-edge technology while immersed in a lifestyle that’s very different from what they know. And for many students, the impact is life altering.

Ian Passe, a 21-year-old environmental studies and anthropology double major from Manhattan, has spent months in Madagascar studying how beneficiaries of the DrOTS project are responding to technology they’ve never seen before. After meeting Small in 2015, Passe said he began to see the human side of environmental studies. And he could no longer look away from the reality of human suffering.

“The effect this program has had on me has been tremendous,” Passe said. “Once you learn about a problem, life becomes about, not doing the work because you need the grade, but because it matters. And when you’re on the ground seeing what people have to go through to get simple medical care, it’s devastating.”

“This has affected the advanced degrees I’m looking to get, each class I take, every book I read,” he added. “I’m asking, ‘How can I improve healthcare around the world?’”

For more than a decade, Lynch has studied the impact of climate change on various species in the wild. As a mathematical ecologist, she collects data that shows how different populations are growing, declining or migrating in an increasingly warmer climate. Recently, she’s been using drones to help.

Lynch is tracking Adélie penguins, the most common species on the Antarctic Peninsula. Many areas of the peninsula have been hit hard by climate change, and until recently, ecologists such as Lynch believed that the Adélies there were in serious trouble. But in a paper published in early March by the journal Scientific Reports, Lynch and her colleagues told a more optimistic story.

In 2014, while working with colleagues from the Woods Hole Oceanographic Institution (WHOI) and NASA, Lynch found the first clue that would lead the team to a groundbreaking discovery. Existing satellite images of the peninsula showed signs of guano stains — excrement left behind by seabirds. The presence of guano in such large quantities indicated that there were a great number of Adélie penguins nearby.

The stains were located on the Danger Islands, a remote island chain on the peninsula’s northern tip. The name is apt, as the rocky islands are surrounded by frigid and treacherous waters. Thick sea ice fills the nearby ocean, making the islands difficult to access.

“Until recently, the Danger Islands weren’t known to be an important penguin habitat,” said Lynch, associate professor of Ecology & Evolution in the College of Arts & Sciences.

Still, they had to follow the evidence, and in December 2015, Lynch was part of a 10-person expedition to the Danger Islands seeking to count the birds. What they found was stunning: 1.5 million Adélie penguins, all living together in a supercolony.

“We knew that it was a huge colony, but we didn’t know exactly how many. It wasn’t until we got there that we learned 68 percent of the Adélies in the region were on the Danger Islands, in an area that’s only 10 to 15 kilometers across,” Lynch said. “Prior to this we had searched the entire coastline with high-res imagery. It was really surprising because I thought we had searched everywhere, but we had missed some of these islands.”

While the team did count the birds by hand using clickers, they were also greatly assisted by drones, which flew over the island taking rapid photos of the colony from above, creating large mosaic images for each island. With the collaboration of researchers from WHOI, Oxford University and Louisiana State University, the work was  completed in just 12 days. Without drones, the project would have taken weeks — an impossible timeframe because of the unpredictable sea ice.

Thanks to Lynch and her colleagues, the Danger Islands can now be considered for designation as a Marine Protected Area, which would greatly limit the amount of krill fishing that can happen there. If the penguins’ food supply is protected, Lynch said they should continue to live comfortably there for many years.

“There’s been a lot of concern that now that we’ve discovered them they’ll be overwhelmed with tourists. But people don’t have to worry, as the Danger Islands do protect themselves,” Lynch said. “Their future is bright. It doesn’t mean that climate change isn’t happening, but this is a rare piece of good news.”

“Drone photography is an emerging industry right now that is becoming more and more popular. It allows people to show the world from a different perspective,” said Eck, 21. “I’m still learning the strategies for recording a decent video with my drone.”

On campus, Eck has found common ground with members of the student-run RC Flying Club. Their goal is to provide an opportunity for drone enthusiasts and newcomers alike to learn more about drone technology, hone their creative skills, and meet others that share their interests.

The club is undergoing a reboot this spring, but they’re currently planning on building a small drone over the course of the semester and hosting several “fly days,” where drone pilots of all levels can gather to enjoy the warm weather and practice flying the club’s drones. The flights are held in a dedicated, pre-approved field at Stony Brook’s Research and Development Park, Eck said.

The students were careful to secure approval before launching any vehicles. For reasons of safety and security, use of drones is strictly prohibited at Stony Brook without prior authorization from the University.

The University’s policy is that drone use on campus is prohibited except where they’re being used to fulfill a critical mission of the University.  The use of drones is to be accomplished in a way that protects human and environmental safety, and meets all regulatory requirements, including insurance coverage and federal guidelines.

“We have established a location where students use drones for research or academic reasons, but authorization for that is given on an individual and extremely limited basis,” said Gary Kaczmarczyk, Assistant Vice President of Environmental Health and Safety.

While drone technology is still developing, it has already expanded the horizons of what the Stony Brook community can create and achieve.

“I think drones have a great potential to be used as an educational tool,” Eck said. “While a lot of times you might hear students say, ‘Why am I learning this? How is it going to be applicable to real life?’ They can apply the knowledge they gain in the club to building a small drone, photography, journalism, or in field work. There is a wide range of opportunities.”