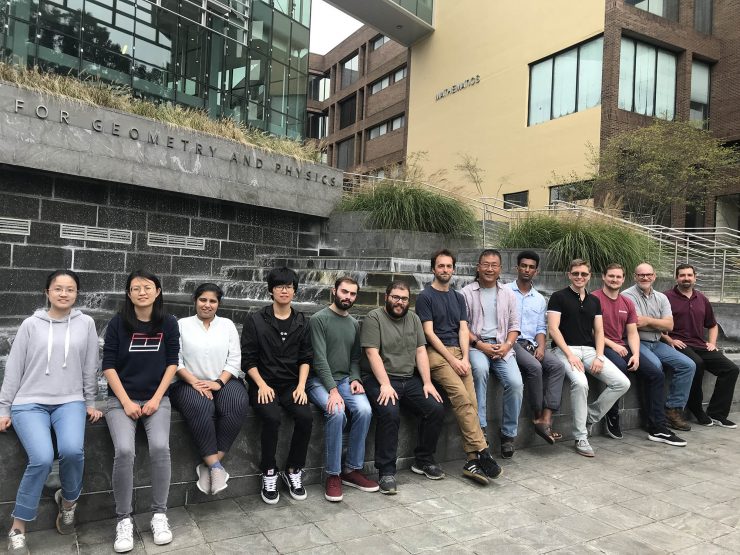 The T2K Collaboration recently published new results showing the strongest constraint yet on the parameter that governs the breaking of the symmetry between matter and antimatter in neutrino oscillations. The findings were the featured cover story of the April 16, 2020 issue of Nature, the international journal of science. Chang Kee Jung, distinguished professor in the Department of Physics and Astronomy and a leading member of T2K, collaborated on these recent findings along with Associate Professor Clark McGrew and Assistant Professor Michael Wilking, and the entire Neutrino and Nucleon Decay (NN) Group, led by Professor Jung.

A fundamental question about the formation of the Universe is how there came to be more matter present than antimatter. It is thought that this disparity is related to a violation of fundamental physics. The laws of physics are essentially symmetrical — what holds true for matter particles in our Universe should also be true for antimatter particles in a mirror universe. But this is not always the case, and it has been shown that quarks do not behave in quite the same way as their mirror-image antiquarks. Such symmetry violation — known as charge-conjugation and parity reversal (CP) violation — has not yet been demonstrated for leptons, the class of fundamental particles that includes electrons, muons, taus and associate neutrinos.

“If humankind is making a journey to discover CP violation in neutrinos, T2K is now almost halfway there,” Professor Jung said. “Many people are needed to work on efforts like these — hundreds of people at all different levels, from leaders to people who work directly on the accelerator, beams, detectors and analysis. It takes that kind of collaboration for discovery.”

Using the Super-Kamiokande detector, pictured on the cover of Nature, to capture neutrinos emitted 295 kilometres away at the J-PARC accelerator complex in Tokai, Japan, the team determined that the probability for a muon neutrino to become an electron neutrino seems to be different from that of a muon antineutrino to become an electron antineutrino, thereby providing an indication of CP violation in leptons. If confirmed by more precise measurements in the future, this violation may help point the way to an explanation of how excess matter was formed in our Universe.

The T2K experiment is supported by the Japanese Ministry for Culture, Sports, Science, and Technology (MEXT), and is jointly hosted by the High Energy Accelerator Research Organization (KEK) and the University of Tokyo’s Institute for Cosmic Ray Research (ICRR). The T2K experiment was constructed and is operated by an international collaboration, currently consisting of nearly 500 scientists from 68 institutions in 12 countries.

More information about the T2K experiment can be found on the T2K public website.