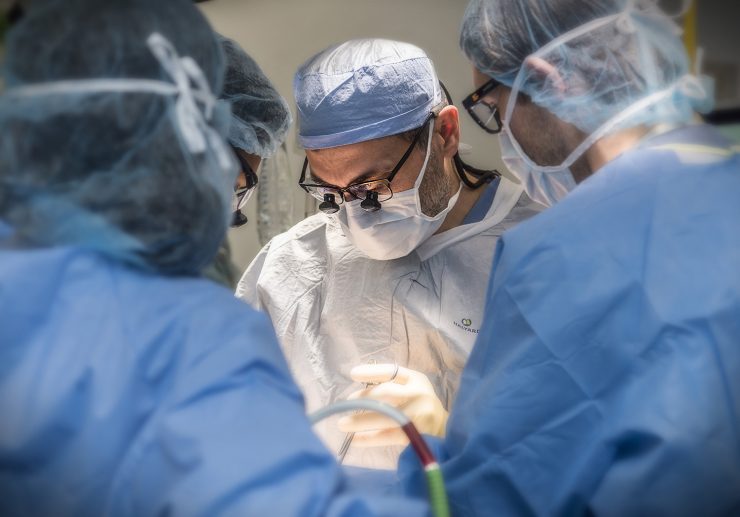 A new study that monitors patients who received “on-pump” or “off-pump” coronary artery bypass grafting (CABG) over a 10-year period reveals that outcomes between the two forms of heart bypass surgery are not much different. Led by Laurie Shroyer, professor of surgery in the Renaissance School of Medicine at Stony Brook University, and Northport Veteran Affairs (VA) Medical Center WOC health science officer, the findings are published early online in JAMA Surgery.

For the past 20 years, surgeons have debated over traditional on-pump surgery — which uses a heart-lung machine to circulate the blood while the heart is stopped, enabling surgeons to more easily complete CABG — or off-pump, which eliminates complications potentially caused by the heart lung machine yet makes the procedure more technically difficult. Monitoring the post-CABG outcomes of all original ROOBY trial patients, this phase IV clinical trial represents the largest U.S.-based, multicenter, randomized clinical trial comparing off-pump versus on-pump patients.

The researchers tracked more than 1,000 veterans for each group — those treated by way of on-pump and those with off-pump procedures over 10 years. These veterans are a national cohort from 18 VA centers. The average age at the time of surgery for both groups was about 63.

According to the authors, no significant 10-year treatment-related differences were documented for any primary or secondary post-CABG endpoint rates. Endpoints included repeat CABG, other heart revascularization procedures and changes in cardiac symptoms. The death rates at 10 years were 34.2 percent for the off-pump group and 31.1 for the on-pump group.

The analyses for cardiac outcomes for these two groups were completed from May 2017 to December 2021.

“While our findings may not settle the ongoing debate about on-pump versus off-pump advantages with CABG, the data is strong to support the notion that for patients who are viable candidates for either procedure, no benefits were found for using an off-pump procedure,” said Shroyer, lead author. “As these veterans were nearly all men, the findings should not be generalized to women or non-veterans. Thus, surgeons should choose the best CABG method based each individual patient’s risks and in light of the surgeon’s own technical CABG expertise and post-CABG outcome experiences. In summary, each CABG patient’s care should be customized to meet their unique needs.”

“I congratulate the authors for their diligence to follow this group of veterans, who represent the first wave of an operation that has since evolved greatly,” said Dr. Thomas V. Bilfinger, professor of cardiothoracic surgery at the Renaissance School of Medicine, who was not involved in the study. “These operations were performed at a time when this revascularization approach was considered novel, and it served as an impetus for a few dedicated surgeons to advance it further to become a minimally invasive robotic and often hybrid operation. While it is good to know there is no difference in the long-term outcomes between off- and on-pump groups, the lasting importance of this research is that it provides a seed to newer procedural developments that will lead to long-lasting beneficial outcomes for today’s patients.”

The study authors write that the findings in their report do “concur with the 2015 consensus statement by the International Society for Minimally Invasive Cardiothoracic Surgery that off-pump CABG may be associated with an increased long-term risk of reintervention and death.”  Yet, the “10-year symptomatic benefit of patients who underwent CABG was not influenced by the treatment approach.”