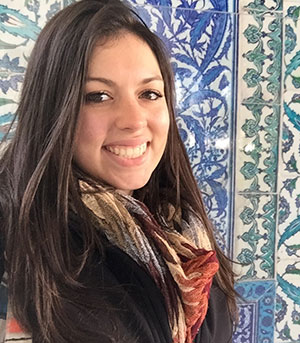 Two Stony Brook University students earned prestigious Fulbright grants for 2016–17, and another student who received a grant for 2015–16 has been asked to renew her English Teaching Assistantship (ETA) in Turkey.

Brooklyn, New York, native Sumaira Mian ’16, who has dual majors in biology and religious studies, accepted the ETA in Turkey, while Ross Medico ’13, who majored in political science and international relations, from Bellmore, New York, is an alumnus currently teaching English in South Korea. Ross, will head to Taiwan in the fall after accepting an ETA there.

Alumna Michelle Chiarappa ’15, linguistics major, from Centereach, New York, was invited to spend a second year in Turkey based on her exemplary service.

The Fulbright Program, which was created by U.S. Senator J. William Fulbright in 1946, provides grants annually for international research and teaching to foster global partnership and cultural exchange.

Since 1973, Stony Brook students have earned a total of 71 Fulbright grants.

Jennifer Green, the external fellowships advisor for the Office for the Integration of Research, Education and Professional said, “Ross’ selection is a big success for us. He applied on his own in 2015 and unfortunately didn’t advance in the competition. Then he applied through Stony Brook and not only advanced, but was also named a finalist, Fulbright’s term for someone who has been offered the award.”

In addition to being a non-traditional Fulbright recipient as an alumnus, Ross didn’t have traditional classroom teaching experience, but was able to leverage other leadership roles that gave him transferable skills.

“We are hoping to see more participation from this demographic because to qualify for a Fulbright grant you must have a bachelor’s degree but cannot yet have a PhD,” said Green.

Sumaira’s experience mirrors that of Ross’— neither has an academic background in Teaching English to Speakers of Other Languages, so they are both exemplars of experiential learning.

After she finished elementary school, she lived in Pakistan for five years, where she learned to read and write Urdu and Punjabi.

“When I go to Turkey next year, I want not only to learn Turkish directly from the local population, but also to represent how diverse Americans can be and how through mutual understanding, soft diplomacy goes a long way to bridging cultural obstacles,” Sumaira said.

She doesn’t plan to stop there — Sumaira will pursue a dual master’s degree in the near future and then apply to Harvard Divinity School’s PhD program. She also plans to apply for a Boren Fellowship, an initiative of the National Security Education Program that provides unique funding opportunities for U.S. undergraduate students to study less commonly taught languages in world regions critical to U.S. interests. Sumaira wants to study Arabic in Morocco or Jordan.

“My final goal is to work with conflict resolution and eventually teach English at a university level,” she said.

“Sumaira was highly recommended by Marianna Savoca, the director of the Career Center, who mentors SUNY Jewish Foundation for the Education of Women Scholars,” said Green. “Not only had Sumaira taught English in Turkey for a month and demonstrated an ability to adapt to unstructured circumstances, but has a strong academic record, all of which makes her an ideal Fulbright candidate.”

Ross also enjoys a rich history as a cultural ambassador for Stony Brook. In addition to his experience in South Korea, he studied abroad through the Journalism Without Walls program in Russia, received the Benjamin A. Gilman International Scholarship to spend a semester at the University of Oslo in Norway, and logged a study abroad stint in Wuhan, China.

While in college, Ross made time to play lead guitar in a band that toured with musician Bret Michaels and heavy metal band Twisted Sister, which took him from the Midwest to Germany.

Ross is eyeing a career in public service and international affairs, specifically with the U.S. Foreign Service. Following the ETA program in Taiwan, he plans to attend Johns Hopkins University’s School of Advanced International Studies (SAIS). He will spend a year in Bologna, Italy, followed by a year at SAIS’s main campus in Washington, D.C.